Publicized as the "Miraculous Staircase" this spiral affair has no external support of any kind. It was built in 1873, and is located in a church in Santa Fe, NM. I saw it during a recent trip. If it is impressive today, I can imagine how it was regarded when it was built almost 150 years ago. 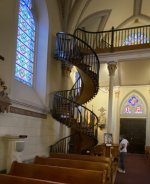 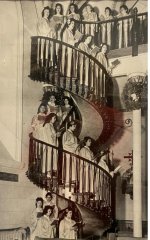 Wood? Metal? Or a little of both?
M

I understand it is all wood, with wooden pegs and no nails.
C

The "Atlantic Spiral Stair Co" has made some interesting ones. I first visited them in the late 70's. or early 80s (CRS ;-)

That's pretty impressive. I wonder how near collapse it was with all those gals on it. I didn't think such a sleek unbraced wooden structure could hold that kind of weight.

Gals back then weighed a lot less than gals today, LOL! Still, nice work. Story has it some carpenter showed up when it was heard they need a staircase, built it for free, and disappeared. Some think it might have been the one who was the reason the church was there in the first place.....
S

I can imagine how it was regarded when it was built almost 150 years ago
Click to expand...

Actually, matter-of-fact constructions of that sort were more common then, and going back further. So many carpenters from the middle ages up worked on churches everywhere, and castles and wealthy places.
I remember being in a relatively simple house on the Eastern shore (18th c) , and the winders were hung with dovetailed parts, from the step above. It was not abnormal work for a skilled carpenter in those days.

The guy who built the Loretto Chapel stairs disappeared after it was complete, without a rail
The rail was added some years later.

I posted close up photos of parts in the past, but can't find them now, either.

Story I heard was during the staircase construction many parts were soaked in water, or ends of parts. It was in Fine Woodworking a long time ago. And it was a story then too, not an actual detailed description.
N

I saw it in 1989 on a trip to New Mexico. The woodwork is impeccable. The closer you look at the joinery, the more amazing it gets. It's absolutely first rate work.

Probably not the case for this particular church and staircase, but it was not unusual for a woodworker to spend decades finishing off all the carvings and miscellaneous woodwork in an ornate church. Fundamentalist plain-jane shoebox churches not the sort of place I mean. Rather, the sort of place where there are doodads, pendants, medallions and spires encrusted on everything. I've visited a church built in 1902 in the High Episcopal diocese of Northern Indiana (since disassociated!), at the time about as close to Catholic practice as you can get without obeying the Pope, which was like that. They told us there was a woodworker who spent the last 45 years of his life working on the interior ornamentation. I think he lived in the basement or something like that.

As to this particular staircase, it is an exceptional piece of craftsmanship. Not just good-looking as constructed, but it has held up so well over the years. The joinery as well as the design must be top-notch.
Last edited: Apr 24, 2022

I'd like to see some close ups of it. I imagine the stringers composed of steam bent sections that are joined end to end. Maybe with vertically oriented finger joints that are doweled.

tomjelly said:
Gals back then weighed a lot less than gals today, LOL! Still, nice work. Story has it some carpenter showed up when it was heard they need a staircase, built it for free, and disappeared. Some think it might have been the one who was the reason the church was there in the first place.....
Click to expand...

Looks like about 12 of them are actually on the staircase.

Heck, even if they were hiding a LOT under those robes, that ain't a lot of weight. Well under a ton.

Bottom level of that staircase case, on the left. The one thats standing a little above the other two. Is that the Karate Kid?

Again, keep in mind that guys who could do most elements of this type of work with relatively "primitive" tools were common in that era. Churches were being built everywhere, all the time. As others noted, (not just) churches often had a live-in guy to build and maintain facilities. Even places like the US capital, the Supreme Court, any place that had millwork often had a shop and a guy to keep the place improved and maintained. He might have served as the janitor, in between. My grade school had such a guy & a one-room shop, though it was an early "modern" building. But he built stuff for the nuns, and projects for the kids classes sometimes, and mopped the halls in between. It was at the end of the time (1950's) when that was disappearing and a few places kept the old guy on even though he was not needed, rather than throwing him out in the street. Point being, before the war, they were essential.

see below. PM is not the most convenient/friendly site to post pix.

I imagine the stringers composed of steam bent sections that are joined end to end.
Click to expand...

There is some visible evidence to support that conjecture.

Maybe with vertically oriented finger joints that are doweled.
Click to expand...

Could be. A lot of that old work was bolted together with various forms of rail bolts and carriage bolts
There were plenty of blacksmiths in the area. As an alternative, work i have seen counted on dovetailed parts hanging from each other. Also joints & applied blocks that counted on wedges pulling things tight on assembly.

Also, see George Ellis volumes for all the ways to build and cheat such work.
There's an even earlier 19thc text have not been able to afford a copy, i'd have to find the name again, but it shows how to do all the complex work expected from the middle ages up to that point in the middle 1800's.

Re: photos, i've notice you can get bigger pix to show with less degrading if only posted one or 2 at a time.

The stairs are heavily faux-grained all over; as was common in that era.
There is some actual QS w.oak in a screen at the very bottom, (Pix later, maybe) but the rest was probably a softwood. In the included photos, note the vertical (joint?) line of the outer skirt/string behind the applied scrim/ & center baluster. There's more of these elsewhere on the stairs, will see what i can find later. 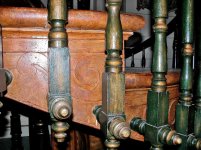 Above = well that is not as obvious as it is in my files.
notice the white crack in the gesso below/behind the center baluster, then follow it up behind/between the scrim, an apparent joint line of the string. 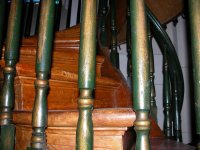 Here's a horizontal join line further up, on the inner string.
Keep in mind, in those days it was common for higher end regular carpenters to just hammer veneer over complex constructions they built. So the "joint" lines could just be the ends of thick, locally produced veneer. But it is suggestive of the possibility that Ford mentions, of linked, pre-bent (steamed?) sections, which was also common. 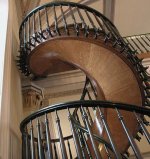 Above- look just below the lower run of rail, on the inside string, horizontal join line. 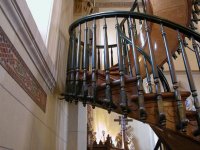 Also notice one of several iron ties thtat connect the stair to the masonary wall.
These will immensely strengthn a helix by preventing it from wobbling sideways.

Other shots of these later.

PS, per my notes that this was really not out of the ordinary for the times, here is some more potential history:
The Truth behind the Loretto Chapel Staircase | Sandoff

To my eye, it is second class work, in the sense that it was built more utilitarian, than fancy.
In those times, utilitarian work was dressed up by the very common QS w-oak faux finish, and by plastering under the carriage of the stair case, since it is faster and easier.

Top end work in some of the Newport mansions, e.g. and many other places of the same era had reall QS w oak carriages immaculately fitted, and the underside of the carriage is completed with panels, or fitted boards, all fumed and clear finished.

OTOH, I am not familiar with another full 2-turn helix in wood, supported by a few iron links to masonary, and the center helical string, even though that string is close to being a pole, structurally. The way it winds out at the bottom is impressive, but might have originally been inadequate. (more on that later)

Another horizontal joint line on the inner string. 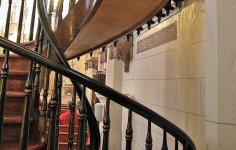 I'm sorry these are not as clear as in my files - the more or less horizontal join line is near the top of the picture, on the inner string, and right in front of a baluster.

First time this ever happened to me (rotated photo). 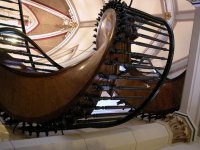 Sorry, can't seem to trick it to stay upright.
iron braces are seen at bottom of pic.
S

This is the skirt, that to my eye, might have been added "later".
Perhaps even by the original builder, or perhaps as other details were added in early years to strengthen and stabilize it. The reason wonder (suspect might be too strong a work, but almost

) is that both the material and the character of work, to my eye, are slightly different than the main stair. IIRC, this is actual W. oak. Not faux finish. Whenever installed, it adds substantial support and stabilization.


There were usually people around, and trying to get close - my excuse for the blurry photos. 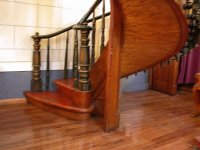 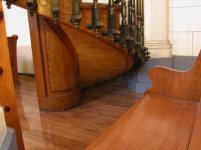 Here's another slender iron brace (with volute detail) connecting to an internal post.
Makes you wonder which is supporting which. 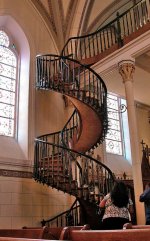 View of the blustrade in another section.
Remember, this was added "later"
Supposedly by a different person(s) than the stair builder.
It was an efficient way to handle that, and in keeping with the hispanic
/middle eastern esthetic of the area. 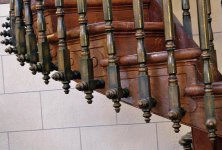 This lists Francois-Jean Rochas connection to the Loretto Chapel staircase - a re-print copy of his obituary is included which lists him as the builder of both that work, and a similar one in St Vincent Sanatarium (later burned)

BTW, the $150 the sisters paid him in 1881 for "wood" is a bit over $4000 in today's money. Absent the covid and war penalty multipliers we are now paying for lumber, about 2 years ago that would have seemed about correct, for enough reaonably clear SPF (as Mr Rochas used) to build a similar construction.

This is a somewhat breathless account of other aspects of his ranching life in the area, but does not mention the staircase:

Quiet and reclusive, Frenchy was one of the bravest men in the Southwest | Roswell Daily Record


In Dec 2019, my wife and i had booked tickets for amonth in middle Europe during March/April 2020 including potentially to see this much older staircase:

Unfortunately the airline canceled our tickets a few weeks before the flight due to Covid.
Now there's a war on.

smt
You must log in or register to reply here.

Friday at 7:23 AM
Tyrone Shoelaces
T
J
VFD OVER VOLTAGE AT HIGHER RPMs