There are utility metal staircases and commonly fancy metal "Library" staircases of extensive rise that don't adhere to building conventions or "codes". But the Loretto Staircase did benefit from being constructed in a place and time where such conventions were disposable. Then by "understanding" and today by codes, there are limits to how high you can run steps without a full, level landing. So we are unlikely to see it duplicated quite as compellingly.

During the exact same period as the Loretto staircase,
this type of back staircase was not uncommon in other areas of the US where wealth existed. Both residential, and ecclesiastical work. This (residential is only a single turn, But note how much more finished all the work is, and in a much harder wood, actual QS w. oak. Quarter to 1/2 turn versions are downright common in "major" churchs, up to the lecturn. 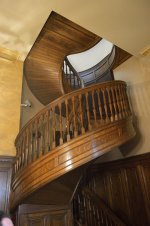 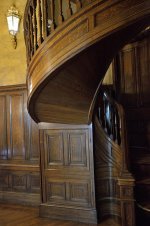 stephen thomas said:
This lists Francois-Jean Rochas connection to the Loretto Chapel staircase - a re-print copy of his obituary is included which lists him as the builder of both that work, and a similar one in St Vincent Sanatarium (later burned)

BTW, the $150 the sisters paid him in 1881 for "wood" is a bit over $4000 in today's money. Absent the covid and war penalty multipliers we are now paying for lumber, about 2 years ago that would have seemed about correct, for enough reaonably clear SPF (as Mr Rochas used) to build a similar construction.

This is a somewhat breathless account of other aspects of his ranching life in the area, but does not mention the staircase:

Quiet and reclusive, Frenchy was one of the bravest men in the Southwest | Roswell Daily Record


In Dec 2019, my wife and i had booked tickets for amonth in middle Europe during March/April 2020 including potentially to see this much older staircase:

Unfortunately the airline canceled our tickets a few weeks before the flight due to Covid.
Now there's a war on.

If I ever need advice on old staircases, I know who to look to for knowledge.

The carving on that center spire is awesome.

Looking at that staircase, I'm impressed by the carving. More than that, though, the fact that they were able to duplicate it for the entire handrail.

With blacksmithing one of the things that shows how much skill a smith has is their ability to recreate something.

It's one thing to forge a hook. It an entire different thing if you can forge a dozen identical hooks.

I never have had much luck forging wood... conversely, it's QUITE difficult to cut a good mortice in a steel post with a chisel.
R

That is a very cool staircase! I was in Sante Fe a few years ago, wish I had known of it, would have loved to see it.

It surprises me that everyone is so impressed that someone in the 19th century working with hand tools could accomplish such a feat. The carpenter (probably not the same meaning as today) was from France, where he was probably trained in a rigorous system which preserved and passed on the collected wisdom and experience of centuries of woodworkers, in a very methodical way. I have to believe that the trades drew some very smart and talented people, as there were no rocket ships or computers to be designed and built, surgery was done by barbers, no airplanes, etc. So many of the "sharpest knives in the drawer" were available to hand make all the important stuff.

In pre-revolutionary France, when a piece of furniture was completed for the King, it was paraded thru the streets to be seen by his subjects, in what was called a "varnisage". Wealth and prestige were gauged by the quality and cost of one's material possessions. Craftsmen had a far higher relative status than today. Not saying I would have preferred to live back then, was kinda rough in a lot of ways, but I might have achieved great wealth and status. Or been beheaded...

stephen thomas said:
Here's a horizontal join line further up, on the inner string.
Keep in mind, in those days it was common for higher end regular carpenters to just hammer veneer over complex constructions they built. So the "joint" lines could just be the ends of thick, locally produced veneer. But it is suggestive of the possibility that Ford mentions, of linked, pre-bent (steamed?) sections, which was also common.

Above- look just below the lower run of rail, on the inside string, horizontal join line.

Also notice one of several iron ties thtat connect the stair to the masonary wall.
These will immensely strengthn a helix by preventing it from wobbling sideways.

Other shots of these later.

PS, per my notes that this was really not out of the ordinary for the times, here is some more potential history:
The Truth behind the Loretto Chapel Staircase | Sandoff

To my eye, it is second class work, in the sense that it was built more utilitarian, than fancy.
In those times, utilitarian work was dressed up by the very common QS w-oak faux finish, and by plastering under the carriage of the stair case, since it is faster and easier.

Top end work in some of the Newport mansions, e.g. and many other places of the same era had reall QS w oak carriages immaculately fitted, and the underside of the carriage is completed with panels, or fitted boards, all fumed and clear finished.

OTOH, I am not familiar with another full 2-turn helix in wood, supported by a few iron links to masonary, and the center helical string, even though that string is close to being a pole, structurally. The way it winds out at the bottom is impressive, but might have originally been inadequate. (more on that later)

Amazingly when that was built there were probably hundreds of skilled men who could build something like that, many times over. Today you might be one of the select few who could figure out how to do it. There might be many who could model it and look for a CNC shop, or bet he can 3d print one.

But today that pool of manual building skills is very shallow on both ends. The old ones are dying, and new ones are not being thought.

Great thread and especially Stephen’s contributions. I am again amazed at the knowledge here.
You must log in or register to reply here.

Yesterday at 7:23 AM
Tyrone Shoelaces
T
J
VFD OVER VOLTAGE AT HIGHER RPMs