I picked these up because they were cheap and I'm a sucker for the more specialized and obscure tools. As the name implies, these are for doing measurements on things that need minimal pressure applied, softer materials that easily deform. They work by means of having a floating jaw that is connected to the needle in the window. That jaw applies a set amount of force when the needle is centered between the lines (sorry about the parallax in the photo.) They still apply a small force, so really soft stuff is going to still get squished, but that force applied consistently across measurements, so you at least have a transferable and repeatable baseline. 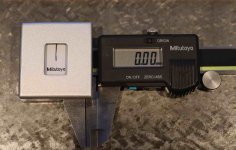 I found that the pressure indicator needle was a bit sluggish, not quite sticky, but getting there. This is pretty common with older clockworks as the lubricant tends to dry up with age, and dust helps gum things up as well. I'm by no means a watchsmith, so take the following with all the incredulity that internet advice should be given. 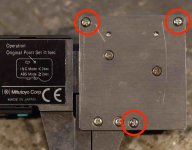 The pressure blade mechanism is made accessible by removing the 3 marked screws on the back, which allows the cover to be detached. The cover also provide a small limit stop for the pressure blade, so remove it slowly and carefully to prevent any rapid movement of the indicator. 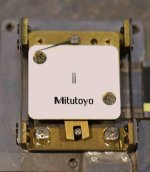 Internally the mechanism is very simple, the moving pressure jaw is held in a spring flexure that applies the force and keeps it aligned and parallel with the measurement jaw. The pin centered between the fixtures this jaw is mounted to loosely engages with a lever arm that transfers the motion via a partial gear machined on the other side of the arm. This partial gear then drives the pinion gear of the needle. The needle itself is sprung with a fine hairspring, which in my experience is the most likely culprit for sluggishness of movement. I used to believe that the bearing points were to blame, but when these springs get gummy they tend to stick to themselves in such a way that the force they apply radically varies and results in inconsistent needle movement. 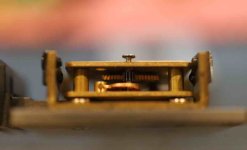 This top view shows the needle pinion, the partial gear of the lever arm that engages it and below them the hairspring. Using a syringe I flood the spring and lower pivot area's with IPA while working the jaw flexure back and forth. I use the corner of a dust free lab tissue to absorb the diluted materials, and repeat a few times. Once it is fully evaporated I use Mitutoyo Microl to re-oil all the pivot points including the lever arm pivot. I'm not crazy about oiling the hairspring as the gumminess will return over time, but unlike with watches, it appears that these springs are often lubricated from the factory. As these are not timepieces that live and die by the consistency of force, I think it is done to better damp the needle movement.

I reassembled it and the needle travel is consistent, smooth and repeatable.
You must log in or register to reply here.

L
Is my indicator damaged?

R
Which dial caliper to trust? (This was worded as "dial indicator" before. In the end a dial is a dial)
2 3