Does anyone recognize this cross slide inch/metric dial that is on my "new" 1946 Monarch 18cu? Every monarch I have looked at has a different type of dial than this. Mine reads mm on the carriage side and inches on the handle side. Does any know if in the 40's the Monarch came with only a inch standard dial?
I found one post yesterday about a British made metric conversion dial for Lathes that originally only had inch dials. I think that is a good possibility as the threaded hole where my finger is pointed is a 5/16-22 thread. So just to clarify, I am wanting to know if this was a factory Monarch dial or aftermarket and possibly where it would have came from. Thank you, Keith Kubosh! 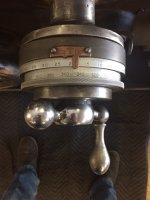 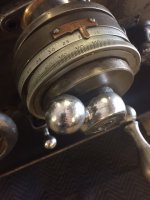 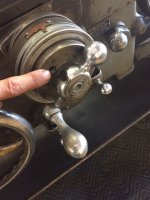 Keith, I just bought a 18CU 1945. Mine has a cross feed dial even more cosmic than yours. These have to be aftermarket. Mine is also the only one I’ve seen with a carriage dial. It sets down low by the carriage handle.

Keith, my 1940 10EE was originally sold to a British company, then it was purchased in the early 90's by Anchor Machinery in Port Orford, OR. I bought it from Anchor Machinery, and it was still equipped with all the original accessories. It also had transposing Imperial/Metric dials on the cross feed and compound, although it had imperial lead screws. Both of the transposing dials had internal planetary gearing, so when you rotated the crank a full turn, the dial would turn at a different rate, showing the metric feed. You could flip a lever to turn off the transposing and lock the dial to the shaft. I am sure Monarch did not make the transposing dials. They were high quality, but the assembly to the machine was not up to Monarch standards of fit and finish. I think aftermarket transposing dials were popular at some point.
R

Necrothread dug up by hatconversions, from 2017.
You must log in or register to reply here.

B
CVA Lathe vs Monarch 10EE round dial