The worm assembly on my Monarch Model 61 was worn out, and after looking at its design, I decided to make repairs and to redesign the assembly.

Before I go any further, I want to thank Cliff Holm, a member here, who sent me a worm, driver, worm wheel, and half nuts. The condition of my worm and worm wheel were comparable to Cliff’s, but his half nuts were much much better than mine. Thank you Cliff.

Using Monarch’s nomenclature, the worm assembly consists of a collar, three bronze bushings, a driver, a driver plate, and a worm. The picture below shows the parts less the collar and bronze bushings. 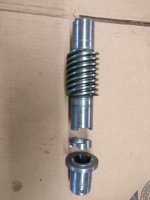 My idea was to redesign the assembly pictured by repairing/redesigning the worm, and making a new driver that combined the driver with the driver plate (the two lower parts in the picture). I also planned on making the center bronze bushing longer to better support the joint between the driver and the worm.

The drawing below reflects the design changes I made and the repairs/redesign of the worm. 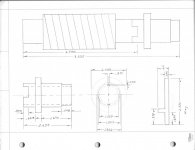 The first thing I did was to regrind the bearing surfaces on the worm. I was careful not to grind the thrust bearing diameter. The finished diameter was used as the OD of the new driver so that all the bronze bushings had the same ID. 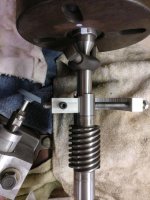 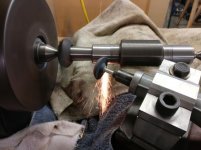 The new driver was machined from a bar of 4140, C25 steel. I am only a shade tree machinist and I thought C25 would be about as hard as I could machine. I might have used harder material, but I do not know how hard a material I can turn.

The first two pictures show the machining of the driver blank. The third picture shows the new driver blank and two old worn out drivers. 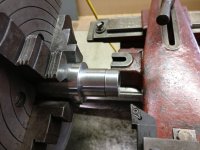 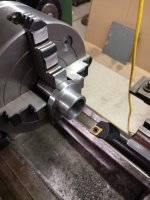 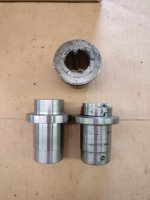 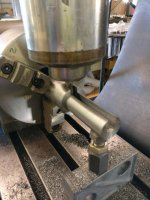 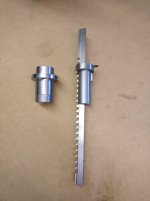 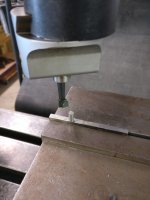 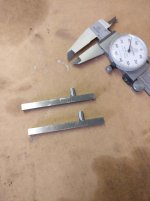 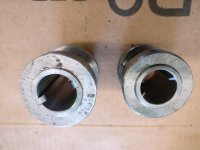 Not shown is the machining required to form dimples in the driver blank for the three set screws that hold on the collar shown in the final picture, or the bonding of the keys into the driver blank using Loctite 638.
N

The next task was to clean up and deepen the dogs on the worm.

The first picture shows the dogs being ground using the dividing head in the milling machine (the dust hood used to suck up most of the grinding dust is not shown). I felt that the worm was too hard to use HSS or carbide on, so I ground it. The second picture shows the finished dogs on the worm and the worn dogs on an old worn out worm. 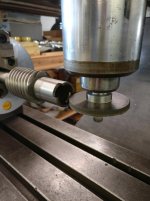 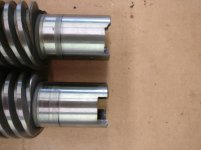 The grinding wheel was centered on the wall thickness of the worm, and the top of the wheel was aligned with the centerline of the worm. Care was taken to make both dogs the same and to make the dogs 180deg apart. 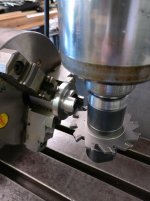 It should be noted that the depth of the dogs was increased to .300” to account for the relative softness of the new driver and to improve life. It should also be noted that a 3” diameter wheel or cutter is about the limit that can be used without the wheel or cutter striking the opposite side of the driver or worm. If the dog depth is increased beyond .300”, it is likely that a smaller wheel and cutter will be required.
N

The picture below shows the final assembly (less the bronze bushings) along with a worn out original assembly. Note the hole for the secondary key in the integral collar of the driver. 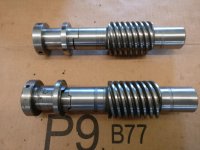 The original bronze bushings were identical, and all were held in place via tapered pins. The tapered pins were offset to the left side of all three bushings. I decided to make the center bushing longer so that it supported the joint between the worm and the driver. This meant that the center bushing was a little over a half inch longer than the other bushings, but the recess for the taper pin was still the same distance from the left side.

The next pictures show the machining of a 932 bronze bushing, and using a ¼” ball end mill to rough in the recess for the taper pin. The recesses were reamed with a taper pin reamer after installation. 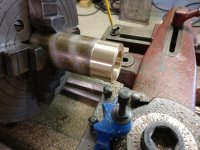 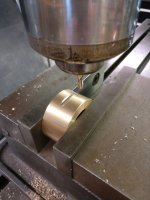 One question, my eyeball says the worms aren't the same pitch....but calibration of my glasses could be off

and/or perspective or camera angle.
N

Matt
They are the same.

Very cool! I might try and copy your instructions!
N

If you have any questions, I would be happy to help if I can.

If this thread isn't made a "sticky", I at least need to make a hard copy of it (should anyway). These are excellent ideas and this day of reckoning DOES come when you refurbish the apron & carriage of a series 60/61. I'm glad the parts I installed were usable, but I wish I had dared to do something like this.
N

I don't want to get ahead of myself too much. I have not put it into operation yet. But if the keys stay in place and the new driver is hard enough, then I think the fix will outlast me.

I'm wondering if you have any theories on why the original set up was 3 pieces ?

I would assume the center piece could be made of a softer metal, a wear item, more easily replaced. But looking at your pics, it looks like the worm gear took the brunt of the wear, on the original.

Have you put power to this yet ?
A

This isn't directly related to the worm gear but it may be interesting to some. I recently had my apron off and had noticed that the bushing for the feed rod was badly worn at the gearbox end. The shaft it's self was also worn. The shaft is a fully keyed piece which would seem to be very good at wearing out the bushings. I had a new shaft made which was not keyed all the way to the ends. I then had the tail stock end machined down smaller than the depth of the key to allow it to slide into the worm gear and had a sleeve made which I installed with some loctite 680 retaining compound. Once assembled there is no keyed section inside the end bushings.
You must log in or register to reply here.