... begins a very old thread on serial numbers, which are, in reality, a model code, EE, etcetera, followed by a sequence number, usually four or five digits.

(I obtained the table from a source believed to be reliable, but I have not checked that table with Monarch).

From the sequence number, one can tell within a few weeks of when Monarch's production control department committed to making a particular machine.

The sequence number may or may not indicate when a machine was finished, as it is a sequence number assigned when the manufacture of a particular lathe order was accepted.

The serial number plate affixed to the frame indicates a lot of interesting facts, sometimes including the value of the machine, and often the actual date of completion.

The number stamped between the Vee and Flat way, at the right end of the machine, will always indicate the model and the sequence number.

Given those two facts, Monarch can, within reason, respond to questions about and requests for prints and parts.

Of course, this doesn't account for bed changes, but that's to be expected.

There are bound to be apparent exceptions, particularly on so-called "War Baby" machines, as some of those were scheduled as dozens or even hundreds of otherwise identical machines at the beginning of a period, with individual examples coming out of Monarch's erection floor when they were ready for shipment.

And, in those times of particular economic and political stress, world-wide, parts remaining from otherwise old stock may have been used on a new machine, which accounts for the crossover in 12.0" and 12.5" EEs and the various versions of M-Gs, DC Panels, and WiaDs.
2

Peter
The table is fairly close on mine. 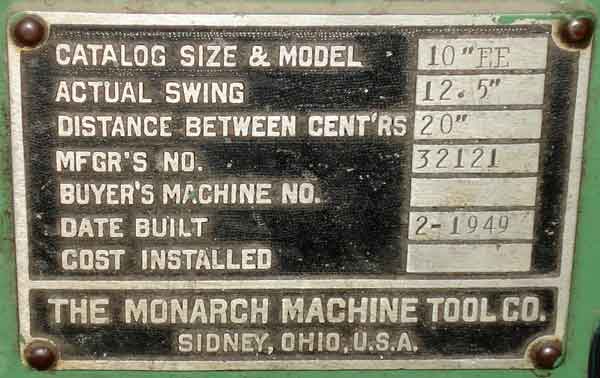 Peter, This puts my number slightly behind what your 2004 post said should be "at least" for 1956. What is the build date & serial number of your '56 for comparison?
W

The 49159 does not match the table that well (would have been 1966). However, the 30 inchers being rare, it could have been sitting for a while.

the delivery adres was in New York

Not my machine just the shop where I work and I'm no manual machinist but this thing makes me wish I was! Very fun and easy to run
S


The brass data plate is missing from the Headstock, ... and all I have, in the way of information on the machine, is the "CK 20445" that's stamped in the end of the bed.

It's for sale over in the classified ad site. Someone should love it, but that person isn't me
#22047

I just picked up a 1954 M/G manufacturing model, tailstock only, no turret:bawling: 4000 rpm model and serial number 38390. It has USN property tags on it and according to Monarch lore the Navy never used any WIAD machines in ships machine shops so they were ordering them much later than they were otherwise available to other users. ( I read that last part here in a thread I think )

The official changeover from Ward-Leonard System to WiaD was 1949, but customer demand kept the W-LS machines rolling off the production line a LOT longer than Monarch had anticipated.

What you sacrifice with the W-LS is efficiency. What you gain is customer familiarity with these systems as all kinds of elevators and hoists (and equivalent devices in a naval setting) also used the WL-S.

A competent radio technician could fix a WiaD, but an M-G repairer should know a little about rotating power amplifiers.

Oh, yes, the navy used Amplidyne®-based systems, which are like WL-S, but with a very much higher amplification factor.

The serial number table which I posted is not fool-proof.

As Production Control received an order, a sequence number was assigned, sequentially.

As machines were completed, perhaps a year or more later, the sequence number was stamped on the machine as its serial number. Plus the model identifier (EE, etcetera).

You should find lots of groups of sequence numbers which refer to identical machines.

Say, the DoD ordered 100 10EEs, and specified a delivery schedule which was convenient to it. Monarch would assign those 100 sequence numbers immediately upon receipt of the order. As the machines left the erection hall (final assembly) the original sequence number and the date of completion would be stamped on the machine.

Monarch was one of the very first companies to be placed on 24/7/364 operations (probably a day off for Christmas) ... another one was Electro-Motive Corp (now Electro-Motive Diesel) for construction of naval submarine, transport and landing craft diesel engines ... they completed thousands of machines, often mainly "toolroom" models as the initial requirement would be for making tools, and the subsequent requirement would be for production. And, what with the DoD buying loads of machines ... after all, the end-user (contractor) had no money for such expensive machinery ... you might anticipate that "order entry date" (when the sequence number was assigned) and "ex-factory date" (when the product was actually shipped) could vary all over the place.
K 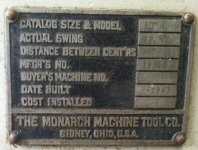 Trying to decode a SB 10L

N
New to Me 10ee Missing ID Plaque - How to Identify