Multitasking, or learning to crash two lathes at once.

Ok, so i didn't really crash two lathes or even one lathe but I thought about it, a lot.

I have two lathes set up facing each other, just turn around, step to the left and go to work. Lathe #1 The Green Meanie 20x96 Reed Prentice. #2 14x48 spanish Clausing. Job #1 boring 2 2.833" id x 1.00" pockets for bearings in 304ss, in a part i have 6 hours into already. #2 Simple pin 15" long x 1.5 with a 2" head and .375 cross hole. also 304ss.
So I had the wrong jobs in the in the wrong lathes, heavy cutting in the small lathe more precise stuff on the big lathe. I've got a lot of time on the big lathe and like it so that is where i was doing the bearing pockets when the pin job came in from a local welding shop. I don't have any time on the Clausing at all and in fact I am still figuring things out. It seems pretty nice compared to the 73 year old iron I'm used to but, it sure won't take a cut like I am used to. I tried 600sfm, .003ipr, .01doc and got horrible chatter, dropped cfm until it quit at 150smf and pushed doc up to .025. Meanwhile the Green Meanie is boring at 250sfm, .015ipr and .025doc not even breathing hard. Same insert on both in Aloris tool holders.

Not very hard or even challenging but stressful for me none the less. A much better use of time than I am used to.

I really don't like 304.
Need to relevel the Clausing to get straight parts.
Need to install new cross slide on the Clausing.
Need to figure out this high sfm, light feed thing.
should probably do my hogging on the Green meanie. (It is really good at that)

And a couple of photos;

View from the Clausing; 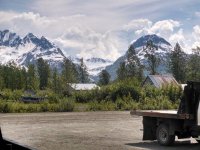 View of my machine corner of the new shop. 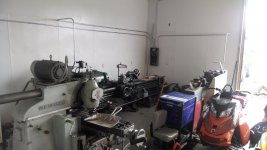 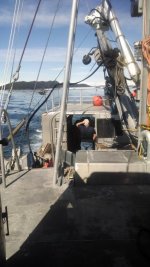 Your cuts sound a bit light to me, you need to go deeper than the tip radius to get the chipbreakers working properly. You don't want any jaggedy wires coming off your part when your back is turned.
M

Don't take it personally, but I opened your first pic, and started cursing you most energetically. It got worse with pic 3.

Wrong time to multi-task when you have 6 hours into a part that just needs a few pockets that should only take a few minutes each. The few minutes you tried to save could end up costing you another 6 hours remaking the part. Not good.

Your Green Meanie a nice kick ass old beast. Learn to use it at least something close to it's potential. You would probably shit if you saw what it could really do.

The pics you posted look great, but they do not show us anything about your setup or what particular inserts you are using.

Your posted feeds and speeds seem out of whack for sure. I at least give you props for knowing what SFM you are running.

Taking a lot of small DOC at a heavy feed and high speed will just wipe out your insert quickly and waste a bunch of time.

I really like using a periphery ground sharp edged insert (Kennametal CNMG432 grade KC730) in stainless because it has low tool pressure and cuts great on a LOT of various shitty materials. Run 300 SFM, .150"+ DOC and .004" to .008" IPR with coolant flood. It also works beautiful as a finishing insert even taking a tiny .001" DOC.

Cutting the 15" long bar of 304 would benefit from using a 55° tool to minimize chatter caused by trailing edge of insert rubbing on the part. DNGP432 would be my choice. Same parameters as above. Basically hog it off in one pass and take two finish passes to hit size if pin diameter has tight tolerance.

Wrong time to multi-task when you have 6 hours into a part that just needs a few pockets that should only take a few minutes each. The few minutes you tried to save could end up costing you another 6 hours remaking the part. Not good.

The Green Meanie is pretty kick ass and I do push it pretty hard at times, well sorta hard but not when I'm boring.
The Clausing I'm having problems with. I need to level it and grind the chuck and figure out what works. What works on one chatters on the other.

J
New manual lathe for all around job shop.
2