I got the damned shoes anyway.... and the loo is warm in the summer months.

What's to complain about?

I have had a lot of luck over the years, doing a lot of different things.
I'm not counting on luck if I start this...a solid plan,hard work, careful design and a solid product from the start is the only chance.
M

Cole2534, you could put the 20" HD Pacemaker I pictured on the table of that Hydrotel and mill the headstock off the bed, if you wanted. Other than monstrous planer mills, floor type HBMs and such monstrous heavy industry pieces, it's the biggest "ordinary" vertical mill I have ever seen. I have no idea the specs on it, but less than about 30hp would seem to be a waste. It had a tracer on it, probably for die making. I would imagine a line of these for cutting auto body part dies. One with a huge facemill to take a big block of steel to the proper thickness, and then a couple more with tracers like this one to actually form the cavity.
C

A_Pmech said:
About 5 years ago I was offered a Hydrotel about that size for FREE. As in, come and get it out of our way free. I had to turn it down. Not because of a logistical problem, but a "WTF am I going to do with this thing?" problem.
Click to expand...

I can imagine all sorts of shenanigans with one of those big'uns, sadly none of it would cover the rigging costs. Call me crazy, but one of these days Im going to buy some used industrial iron simply for my own amusement. I walk past a few dozen robots daily and cant help but imagine one of them suckers parked on the porch as an "automatic" knob twister/door opener or performing other similarly silly duties. Altho it might just be that I really want to install a bucket seat and ride one.
Robot Ride - No Clue - YouTube

As to lathes in particular, I saw this ad the other day and couldnt help but think given a few inches it could swing me.

Thats awesome. Thanks for sharing!

Jaxian said:
I notice no one ever mentions LeBlond lathes. I saw this picture of them and they seem pretty beefy. Did they just never cut it for some reason? They seem both large and capable. There is another one I would have to look for with a very short bed, in comparison to these, that has an even larger swing. Will look for it.

Mike C. said:
Ran across this while going to look at a lathe today. (More on the lathe later, mums the word until it's in the shop, but HEAVY DUTY is a good start.) Anyhow, there's mills and then there's the Hydrotel. Never seen one in my life. Dammit, man....
Click to expand...

According to his autobiography, a business hero bought up government Hydro-Tels, and ran them in Los Angeles County. They'd all been defense plant property, so cared for. This put him into productive competition for aircraft work prevalent in the same area, especially focusing on the larger structural components. Who? Frank Pachmayr. Yes, that Pachmayr.
Everybody else scrimped for individual Friden tape run NC machines, took them years to catch up.

It takes money to make money. Yup. And a fast machine gets worked to death against multiple simple machines with powerful spindles. . .This gorgeous pic appears to be National Advisory Committee for Aeronautics (NACA) archives. 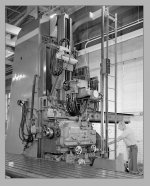 When's last time you climbed 11' for an auxiliary control box? Cool thing about HydroTels, there were a few built 'normal' sized too.
It's disappointing today what folks call 'being in business'. I don't consider a sh**load of cubicles, bluetooth printers in a leased speculative built office tower business.
Show me capital investment; property, substations, maybe a rail spur, or encircled by a paved access road named same as the plant...you get the picture.
Me? Single proprietor, private free standing building, free span interior, loading dock high, zoned M1, with big enough door to push in a 4B JigMil, *8 Rousselle OBI, bits in ~100 tons of equipment.
Plus an abandoned rail spur...

Prerequisite of the Hydrotels, need a big bed pan for them to capture all of the oil they leak out daily. Seen one about half that size many years ago. Like the dual spindles this one has.

In agreement about their inability to hold "precious bodily fluids". The few I've seen in person had dedicated equipment repairers, millwrights (and crib-full of Parker hydraulic supplies), and weren't any worse than common machine tools.
F

If any of you gentlemen decide to part with your Pacemakers keep me in mind :-)

FJsapper said:
If any of you gentlemen decide to part with your Pacemakers keep me in mind :-)
Click to expand...

Where are you located? I may be forced to downsize.

Cole2534 said:
Where are you located? I may be forced to downsize.

Detroit area, PM sent.
You must log in or register to reply here.

Out with the old Cincinnati mill, in with the new.