Hi all,
I've browsed this forum for a while but just signed up today, this is my first post. So I recently bought an MH 700 "Toolroom" machine, made in the 70s I think. It's a beast, works mostly fine but needs some real TLC for sure. It's had three coats of paint, the original green, blue on top, then white clumsily slapped on top of that. I really like the white though - at some point I'll repaint it properly and I think I'll keep that look. What scared me a little bit was the fact that when I finally wiped away the puddle of oil in the tool trays, the bottom of the tray was still green - meaning some of that dirt and oil was probably 40+ years old.

Anyway, speaking of oil I have a few questions. Please bear in mind I'm not a professional machinist, my only other machine tool is a Boxford Model C. So some of these questions might be very, uh, naive.
-First the oiler itself. I'm wondering what oil to use. There's a plate above it that says "10-14°E / 50°C". Now don't get me wrong, I love to measure things in Degrees Elcius as much as the next guy, but I don't know what this means when it comes to oil. I have some pretty generic way oil that I use for my lathe, but is that adequate?
-Secondly, the machine seems to have two oil baths for the gearboxes. From the looks of the little oil window, it's pretty parched in the feed gearbox. So what do I put in there? Same stuff for the spindle? There doesn't seem to be an oil window for that.
-Thirdly, there's a switch on the top-left of the panel and I have no idea what it does. I can't seem to post images yet, but it looks like some sort of... clutch or something? Like a circle with some sort of brake being moved up against it or away from it. Any ideas? I'll post the image once I'm able.

Now you might be asking why I don't just get a manual. Well, it came with virtually zero documentation, Lathes.co.uk doesn't have a manual for this exact model, and DMG Mori came back to me after about three weeks of "searching" with... nothing at all, nice though they were. Everything on the machine so far I've had to figure out myself. So if anyone has access to MH 700 documentation (the angular version, NOT the old rounded version) I'd be forever in your debt if you could share it with me. There was another post on this forum where someone claimed to have documents for an MH 700, but the links now make you ask for Google Drive permissions, so that's a lost cause too.

Any and all nuggets of wisdom greatly appreciated. Thanks all.

Wow, thanks a lot Karl! The MH 600 manual seems very useful. A shame it's not in English but it's way better than nothing. I'll go through it and translate some.

°Engler! Never heard of that before. That's excellent though, I'll get some ISO 150 oil. Any idea of what to put in the gearboxes?

Almost certainly the same as on the MH600. Look for a page in the manual called 'Schmierplan'. If you can't figure out the German, scan and upload it here and Karl or I will translate.

Thanks so much for your help guys, Karl actually sent me some documents from a guy on a german forum, Zerspanungsbude, so massive thanks to him.
I also found the oiling plan on the MH600 manual, or "Conseils pour les produits lubrifiants". Thankfully someone has scribbled in the ISO equivalents here before scanning! I've translated some stuff in red, so here it is for anyone who needs it in the future. 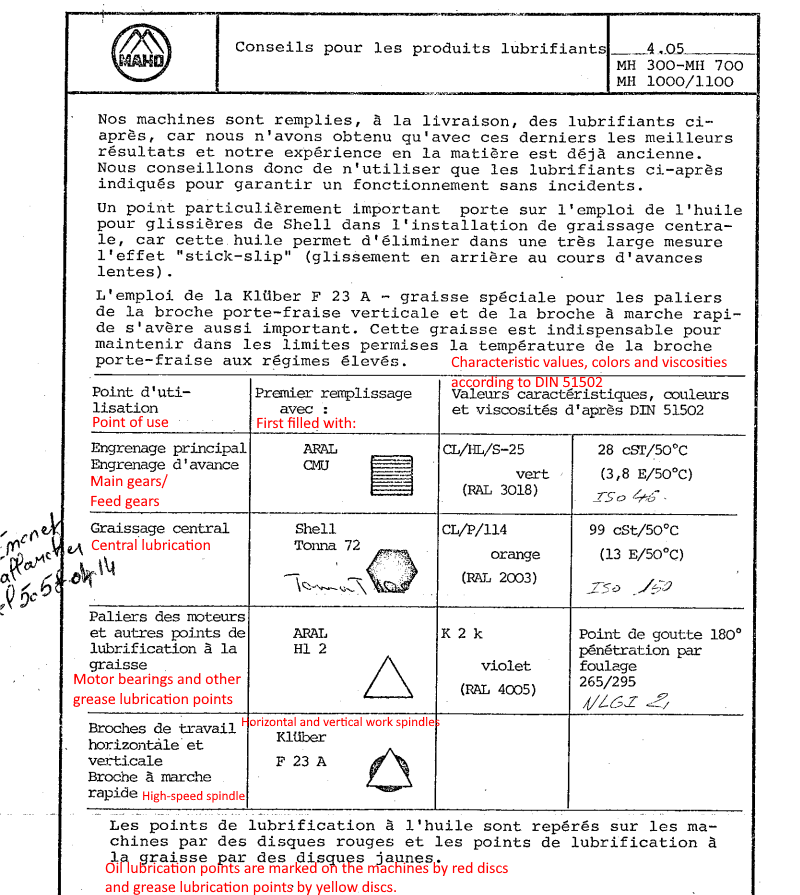 One more dumb question for you guys - is all ISO 150 oil interchangeable? Like, I see ISO 150 slideway oil, but also like, ISO 150 gear oil, etc. I'm guessing you can't just use any ISO 150 right? That's just the viscosity?

For no particular reason whatsoever...

You are correct....Way oil often contains chlorine to help it carry loads plus usually has something called "tackifiers" which help the oil cling to vertical surfaces.
Cheers Ross

R9000 said:
The MH 600 manual seems very useful. A shame it's not in English but it's way better than nothing. I'll go through it and translate some.
Click to expand...

No need to "translate some" as it's easy as falling off a log to translate the entire manual via Google Translate. I recently translated 278 pages of the operations and programming (Fanuc) manual for a CNC grinder in Czech to English and was astounded how perfect the translation was.... no "Czech-lish" but near perfect English sentence structure...especially impressive considering it was translating technical terms not just common language.

Milacron said:
No need to "translate some" as it's easy as falling off a log to translate the entire manual via Google Translate.
Click to expand...

Google Translate is definitely amazing, despite its limits. Although since the manual is all images and not actual plain text, I'd have to run an OCR over it all to translate it. And I believe that's only available in Google via Google Lens on Android. I was looking for a way to do it on PC last night, but to no avail. Otherwise I'd have to type out the stuff beforehand, then paste that into Translate. Or go through it page by page with my phone camera.

I've genuinely lost count of how many times I've watched Tony's videos, including the Maho CNC conversion ones. I hope he makes more content on the Maho, although I know not everyone likes CNC stuff. I want to see how he fixed that crunchy ballscrew in the head! And how that vertical axis leadscrew/nut is holding up. And maybe a 4th axis for some really funky parts? But yeah.. such good vids.
A

Seems like a lot of re-invention of the wheel. Lots of his "discovery" could easily be answered here on this forum , But i have never seen "tony"post here.....Guess that would torpedo his quest and shorten his revenue stream....
Its all about the money.....No profit here ,,,But U-tube that's another matter....Drink it up boys....Hell why would i want to know how this thing really works, when i can stretch it out for 10 episodes....You watch i get paid.
Cheers Ross

AlfaGTA said:
Seems like a lot of re-invention of the wheel. Lots of his "discovery" could easily be answered here on this forum , But i have never seen "tony"post here.....Guess that would torpedo his quest and shorten his revenue stream....
Its all about the money.....No profit here ,,,But U-tube that's another matter....Drink it up boys....Hell why would i want to know how this thing really works, when i can stretch it out for 10 episodes....You watch i get paid.
Cheers Ross
Click to expand...

I mean, of course you're correct that it would've been possible to just ask all his questions here. And there is a monetary incentive for more content. But although I don't want to sound like I'm defending him just because I like his videos, here's why I think he deserves credit:

-Some people find it much easier to learn the harder (and more expensive) way by trying things out first and foremost. Perhaps that's how Tony likes to do things? And even otherwise, it illustrates the process a lot better to the viewers to do things from first principles (to some extent) rather than just say "I did it this way because that's how the pros on the forum said would be best". All that said:
-I don't know if he's on this forum, but he did post on the LinuxCNC forum so it's not like he just went at the project blind. Genuine question, just trying to understand; would you rather he make a forum thread accompanying/instead of his YouTube vids to show what he did? Speaking of which:
-There's something to be said for "edutainment" that is easily digestible such as what Tony makes. It might not be perfect, but if people are learning and having fun watching, doesn't he deserve to get paid? It's not like we're paying him directly besides, even if he turned ads off, YouTube would still run them as is the case nowadays. And furthermore, there are much easier, quicker and cheaper ways to make a buck online than spending thousands of dollars on a lump of old iron and CNC gear, and then making highly-edited videos for a (relatively) niche community. And there are other people on YouTube who would (and have) stretched out machine project videos for many, many more hours of content.

TL,DR:
I don't think Tony is solely "in it for the money", but I don't think the channel/vids are a bad thing even if he was. I agree that he covered a lot of old ground that's probably obvious to machining and CNC pros, but I think the "first-principles" approach aids learning, for his audience if not for himself.

Maybe I'm misunderstanding your point? Please tell me if so.

While I'm here, I promised pictures, so here you go: 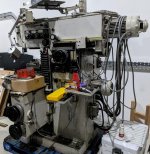 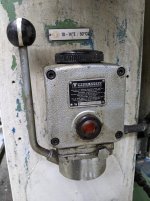 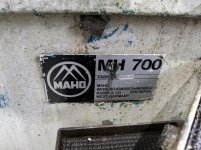 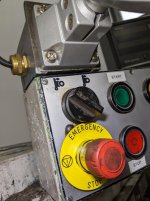 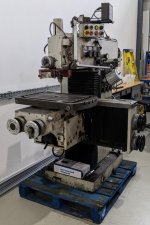 I think this forum squashes them down a bit, so there are full-res photos in an imgur album here.
I've been attacking it with degreaser in various places for the past couple of weeks, so some photos might look a tiny bit cleaner. But honestly there's a very fine line between removing the dirt and the flakey white paint.

R9000 said:
Hi all,
It's had three coats of paint, the original green, blue on top, then white clumsily slapped on top of that. I really like the white though - at some point I'll repaint it properly and I think I'll keep that look.
Click to expand...

My MH600 has a coat of badly applied blue over the original colour, and the repaint is now flaking in places. I'm not one for repainting machines so am looking for proven minimally intrusive ways to assist the flaking process. Suggestions welcomed

Charles P said:
My MH600 has a coat of badly applied blue over the original colour, and the repaint is now flaking in places. I'm not one for repainting machines so am looking for proven minimally intrusive ways to assist the flaking process. Suggestions welcomed.
Click to expand...

My Deckel mill had two badly-applied coats of green paint over the original gray. Some of it flaked off very easily, and some of it really stuck. I think it was just a question of where they had cleaned it before painting.

I experimented with different solvents, but couldn't find anything that would take off the green without damaging the gray. But worth a shot.

But in the end I bit the bullet and repainted the machine. But I only did that after I had used and fixed it for 7 years first. Paint should be one of the final steps, don't even contemplate it until you've used the machine enough to understand its quirks and problems.
You must log in or register to reply here.