Hey guys. I've been a lurker for quite a while as I've been in the machining world for close to 10 years, but never running the machines, but instead on the design and engineering side, and carbide tools for a while. Also Dir Ops for an aerospace machining company.

However, after Covid hit, I started my own company designing components and accessories for vehicles, and now I'm finding myself trying to make a decision as to which machine eco-system to get started on.

The parts we make are a mix of 5 axis small parts (3+2 is fine for most), and mid-sized flat 3 axis parts. (26" x 1 x 3/8) for example. Low Mix (20 ish parts), Low Volume (20 to 200 per month), lots of prototypes. We currently off-load all our work but I want to bring it in house, as I love machining. I've never actually ran or programmed the machines, but I am familiar with most terms and processes.

Initially I looked at getting a used Hurco VM10Ui for our 5 axis needs. However, due to the fact that we're technically new to machining in our shop, I decided to go for a new machine to avoid any headaches and learning curves on the troubleshooting and downtimes of issues that might arise from a used machine.

One big benefit of the Hurco will be the quick prototype, quick set up, conversational. However, my peers don't like HURCO's in the area due to service in the past not being great. (Wichita KS). Hurco also seems to have better components and better build quality. I would use Fusion 360 or CamWorks from SolidWorks (undecided).

For HAAS, most my peers and network use HAAS Machines and they all recommend them. However, aerospace believe it or not doesn't require great finishes, as my parts do (no deburr, straight to anodize). I am also starting from scratch so to me it doesn't matter which platform, as long as we start with that and we roll with it for the future.

I'd like to hear what your experiences have been with any of these platforms and if y'all reccomend the 3-Axis + KOMA setting from Hurco, vs a Haas VF3 with Haas Trunnion..

Genuinely curious, when buying a new machine why would one pick a VF3 over VF4? 10" of extra X travel for $3/4k (Standard/SS) more? According to Haas site the two machines are still identical footprint and nearly the same weight.
If buying used obviously availability and market price may tip the scales in the other direction...
M

Can you pallet change between a table with a trunnion and table with vises? You are going to get sick of swapping the trunnion for vises and lining them all up by about the 3rd time you have to. I would also lean to the VF4 for an extra 10 inches on X and pretty much the same floor space. The 3 and 4 use the same casting. Haas control probably the easiest to use in my opinion.

GiroDyno said:
Genuinely curious, when buying a new machine why would one pick a VF3 over VF4? 10" of extra X travel for $3/4k (Standard/SS) more? According to Haas site the two machines are still identical footprint and nearly the same weight.
If buying used obviously availability and market price may tip the scales in the other direction...
Click to expand...

I was told the VF-3 is a bit more rigid than the VF-4. Make a machine bigger without increasing the weight, and you'll lose some rigidity.

Cant speak as to the Hurco, no experience with them.

Also in Wichita. We do aircraft interiors, which does require nice finishes. We run mostly HAAS machines. The local HAAS Factory Outlet is out of Kansas City, but this town is so fat with HAAS machines, the service techs basically live here and you can get parts in a day. The bad thing about HAAS is they option you to death, and everything down to the chip auger is an option.

You don't say what types of material you normally deal with but, personally, wouldn't consider building a 5-axis capable machine with an 8K spindle, especially if finish is a big concern.

Also, you are going to get real tired of cherry-picking that trunnion on and off the machine. Probably best to pick what you want to do, depending on what you make the most of, and getting acclimated to machining with 3-axis will be a lot less bumpy. You can always build your machine with the provisions and pick up the trunnion later. Cheers, and best of luck.
A

I appreciate the responses! I am now looking at a VF4-SS with a TRT160 (vs a TR160) as well now. The idea is to have enough table space for our core parts without removing the trunnion. So 50" table would give us that flexibility to have tooling set up on the 3 axis side and the trunnion ready on the 5 axis side.

Honestly I feel like the conversational wouldn't be the decision maker here. Hurco dealer has been great offering pricing, free training, support to get our parts running, etc. Looks super easy to set up and run. Haas has been good and proven platform in the area. But nothing on the pricing side.

I guess it comes to specs and capabilites, HAAS set at 15K rpm, Hurco at 12K RPM. Haas more torque. Hurco better guides and components?. How good is the TRT160 vs the TWA-130 ? (TR160 takes more table space)

This decision is important for me as we will decide our following equipment based on the platform we start training on....
A

Parts are all 6061-T6 and 7075-T6 basically. Definitely not bad idea to get started with a 3 Axis and build from there, but our current volume parts are offloaded to 5 axis. They could be done in 3 axis with some ball nose but we tried and finish wasn't were we needed it. Thanks!
D

seeing more guys park their trunnions in the Y axis on larger machines keepting the table open for trunnion n vise mix. popping a trunnion on and off the table will get old. not sure if you have this option with the setups mentioned above.
H

I have a 2014 VF4ss with a TRT-210 and it has been a great setup for job shop work. With the TRT-210 all the way to the right side of the table I have approx 30" of table left for vices and other misc stuff. One thing to watch out for especially doing work on the trunion is to make sure the machine is warm before making parts. I will run dry cycles to get the machine warmed up before making a part. The machine will move around up to .002" so that can make getting tighter tolerance parts dialed in. But hey its a HAAS and not a GROB/HERMLE/MIKRON! 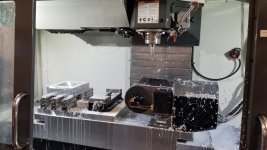 If your parts are mostly aluminum, you want that extra RPM. Even a 1/2" endmill wants over 20K RPM in aluminum for optimum production.
You must log in or register to reply here.

Bridgeport GX 480 vs other small VMCs for garage shop?

A
Looking At New VMCs. Recommendations?