Hey all, long time lurker, first time poster! Just wanted to share my journey in travelling from "number of machines installed: 0" to "1"! I have a business making electronic products and we need to produce the enclosures for that business. Up until recently we were using a hobby CNC machine, powered by LinuxCNC. I love the flexibility to implement things in that control, but fundamentally, even cutting aluminium on it was a chore and lack of rigidity, lack of Z height and other issues made it a constant fight

So back in March 2022 I ordered a Brother S700X2 from Whitehouse Machine Tools in the UK. They have been super helpful and one of the clinchers for the sale was that they have volunteered to send an apps guy to spend time with me to get off that "beginner" rung and get things all our jigs and templates migrated over to the new machine and try to minimise the number of broken things!

So delivery is always the pain. You spend the money, but you can't have the machine straight away. Shipping stuff anywhere in the world is a pain right now. However, finally, a couple of weeks back now, new machine arrived! And WOW! 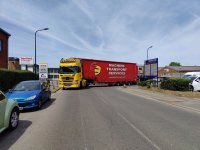 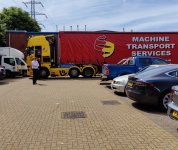 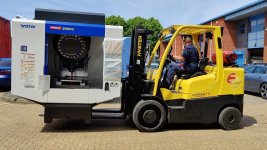 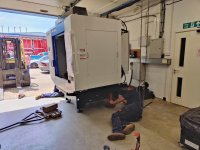 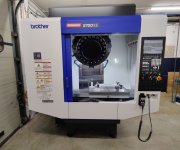 It's still early days. Massive learning curve coming from a hobby level machine. First issue was simply getting tools and workholding! I ordered some vises from Orangevise and those were estimated to be 4-5 weeks, tools took 5-10 days to arrive and due to some challenges in timing, I had the machine here in my workshop for about 2 weeks, but with no "teeth" in it! Just buying all the other things you need for a first machine has also been a pain. Tool tightening fixtures for BT30 were tricky to find that didn't cost a fortune and would be available inside of 2 weeks were unobtainium (in the end I just manufactured something on the old machine... £5 of aluminium and done...). Even getting the torquewrench I wanted was something like 3 weeks delivery from most places I tried... 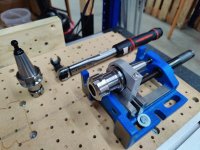 Next learning curve was how not to break things. My word that thing is fast...!! We will be programming everything using CAM, so largely this means programming in fixtures carefully, and being careful with new programs. However, hitting cycle start on full rapids and the wrong work offsets would have this thing be on the far side of the world before you could even think of hitting the e-stop!!!

Next up I smashed the probe stylus before even getting any tools into the machine!!

Just being careless really, I was trying to use a dial indicator to measure something, after probing, and lost attention and ran the probe into some workholding... durr. £130 later and Blum have me up and running. 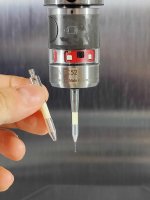 I have both a tool setter and spindle probe on this machine. 16K spindle, CTS, and 21 tools. Having an ATC (and coolant) is going to be the biggest step up from the old hobby machine. We will be cutting thin aluminium (and plastic). We may to a little steel, but that will be fixture/tools that we need, unlikely to be production stuff. I had a spindle probe on the last machine and because that's not "repeatable", I have a workflow which is simply to put stuff where it fits and then probe it to find out where it is in machine coordinates. It's pretty fast and avoids needing to build fixtures that can be positioned repeatably

Observations on the control are that ... it's a bit basic... Bear in mind that my day job is software programming, so when someone shows me LinuxCNC, I just open up the code and make it do precisely what I want! Any closed control was going to be a bit limiting compared with my desire, however, it does seem quite tweakable and to be fair I can do about 80%+ of what I want pretty easily, at least with some workarounds.

In particular the control appears to be accessible over the network. So I plan to write up some videos on this, but at least fairly easily you can set it up as a networked FTP drive, or have it access an FTP server running on a machine you own as though it were a USB stick. However, Windows 11 and latest Mac can't mount FTP shares as writeable drives, so you need extra work to be able to hit save straight from your CAM package. However, what is interesting is that you can write directly to the control and start/stop programs (and get lots of machining data). So I have written some little apps to allow me to directly edit the tool table, etc. I'm thinking to extend this further to build something like a little app to make probing a case of pushing a button, it can dump the NC code onto the machine and run it and then slurp the results back. This should make it a lot simpler to setup jobs. (The Brother can't run arbitrary g-code from the MDI, so you need to create a program with your probe call in it, then run that program - so this makes it a bit of a faff to do arbitrary probing calls. Most people write a whole bunch of preprepared standard programs that probe left/right/up/down/etc and and then just call the appropriate program as they need - gets you 90% of the way to the same place)

Ran my first real program yesterday! Super stoked. It made some chips and dug a real part out of some aluminium! How exciting! Did manage to slice my finger open whilst installing the tools... Note to self to handle those things more carefully while tugging them into the tool holder clips... Vises appear to have arrived yesterday as well, so need to unpack those and hopefully get them fitted!

If you want to follow along with how a software guy is going about converting to being a beginner machinist, then please follow me on Instagram here:
https://www.instagram.com/hi_fly_cnc/

Is anyone interested in more details on getting the Brother networked and remotely tweaking it such as setting up tools, kicking off probing, etc? 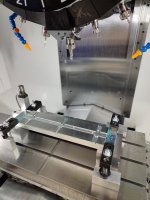 Congratulations on your new Brother Speedio! Fantastic machine. Whitehouse seems like a great distributor and local support for you. Very nice 'New Machine Day' post. Best of success with your S700X2. Plenty of knowledgeable people here for support too.
M

If you get bored on adjusting those spray heads for different elevations, i made a fixed block with 5 nozzles on the backside of the spindle for myself, it was fantastic addition. It is for older brother machine though, might be different. 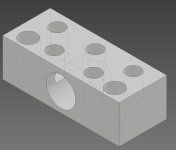 Ooh, that looks nice! How do you get the coolant into it?

I like the idea of that for getting an airblast to stuff. I have some aluminium boxes to cut, where I don't want to use coolant, so an airblast would be quite attractive

My machine has the double contact, so I have a little spray blast thing around that area already, for cleaning off the tool faces. It's a liability for where I have placed the spindle probe (inside left of the machine, quite high). Wondering if I should move probe to front left of table...?Adding more nozzles to that area would make me quite nervous to use the left of the table right now, lots of stuff hanging down near the tool probe...
M

You could easily route airblast or mist into 2 of these nozzles and only use 3 nozzles for cooling as 5 is overkill. I kept the left original arm and it provides sideways/backside coolant to the general area. 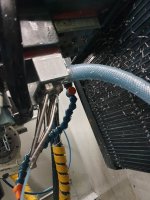 TDC MFG makes a real nice coolant/air manifold. Routes thru the spindle casting/sheet metal/cable track. Have installed them before and they work real well.

The Brother Speedio Coolant Manifold is the first of it’s kind. It not only has 6 adjustable nozzles for coolant, but it also has a built in one for air. With the 6 adjustable nozzles you can make sure that you are getting adequate coolant on any length tool. The air blast nozzle lets you clear pock

I don’t know. From my experience this is a waste of time all this manifold stuff. The only thing I did on my machines was to extend the 1/2” black pipe out and down with some 45deg elbows and 8” or so nipples. Then shortened the lock line accordingly. Works fine. To each his own.
You must log in or register to reply here.