Yea...the siphon method is a Band-Aid at best. Many time, you can't get a siphon tube in place. And if you do, you're not likely to get it to the bottom of the sump to remove all the oil. It's also messy, and slow. Siphon 7 quarts of oil, and you'll know you did a job for sure. As in many cases, what the world needs is a hole at the bottom.

'Sealed' Transmission are just another abomination in today's world of jackass design. They fit right up there with engineers who implement computer chips into toasters and butter knives.
C

GregSY said:
My go-to for transmissions and differentials - unless they hold a bunch of oil - is to drill and tap for an 1/8" NPT allen head plug. It sits almost flush, needs little wall thickness, and is easy to manage due to its small size. A hole tapped for 1/8" NPT will drain plenty fast....go have a warm beer while you let it drain and it'll be done when you get back. If the sump holds a bunch, I might go 1/4" or 3/8" NPT.
Click to expand...

+1 for the smaller than 8 mm taper thread suggestion.

But I'd make a top hat shaped insert with a suitably fine thread to screw into the case first to give a bit more meat for the taper thread. Make the rim 3/16" or so thick and drill 4 vertical holes in it so it can be screwed in using a custom made pin spanner. Sealant under the rim and loctite on the thread so its not going to leak or fall out.

Probably near double the plug thread engagement length compared to what you could get tapping direct into the case. Much more warm and fuzzy feeling.

Mount the car in a rotary rack and turn it upside down.

Gravity will remove the oil.
B

Can you stick a flex hose into the fill point to somewhere accessible perhaps?
Mark
J

IME, most all straight threads that seal a fluid or gas with a copper washer or O-ring that are not inch threadforms are straight up metric pitches. M12x1.5 is a real common metric drain bolt/banjo bolt/o-ring style connection thread. So is M16x1.5.

I have never seen BSPP in actual use anywhere, but that doesn't mean it's not out there. I just wouldn't expect it unless someone was trying to make something nobody anywhere had a tap for.
Click to expand...

British pipe threads are actually pretty common, but not in the US. A lot of stuff from China uses it, even now.

Which doesn't matter here - the issue is how best to add an oil drain plug to an old Jag, and a custom solution may be best.

The problem I see with this is that the material you have to work with is so darn thin. If the pan had some real meat at the bottom I would think it would be pretty easy to just tap a hole and screw in an allen headed plug with a copper washer or whatever type of seal you think would be appropriate. Threading a hole in very thin material in a critical location always gives me the willies. It would be nice if you could use something like an oversized rivnut to give yourself something to work with. I have some that take a 1/2" bolt that although it would be relatively slow to drain, it sure as heck isn't going to rattle out. I have used the smaller (3/8") rivnuts in relatively high pressure applications that have to be sealed from leaking. If you put a thin copper (annealed) washer under the flange before you upset the rivnut, they do not leak. I'm not even sure in this low pressure application if a washer would be needed. You could coat the flange with sealant and crank it down.


British pipe threads come in two kinds, parallel (straight) and tapered. The copper washers are used only with the parallel threaded variety.

Nor are we talking a standard pipe seal here.

We also used “ Dowty “ washers for these sort of jobs. They were a metal, usually steel, ring with a rubber insert in the bore.

Tyrone Shoelaces said:
We also used “ Dowty “ washers for these sort of jobs. They were a metal, usually steel, ring with a rubber insert in the bore.

Also commonly known as Bonded Seals these days. Numerous look-a-likes and knock offs of varying quality in both effectiveness and detail design. Unfortunately still not proof against "Gorilla Guy".

British pipe threads are actually pretty common, but not in the US. A lot of stuff from China uses it, even now.

Which doesn't matter here - the issue is how best to add an oil drain plug to an old Jag, and a custom solution may be best.
Click to expand...

they are standard in europe, thats why the chinese use them.
G

My friend has a BMW motorcycle approx. 20 years old. The drain for the engine oil (maybe it's the gearbox) is huge...like over an inch across the hole. There is a female hex in the center of the aluminum drain plug, pretty small and shallow. That means the gasketed sealing surface offers plenty of 'square footage' and friction. When you go to turn it loose, the allen head is doing all it can to rotate the plug without stripping. What a dumb design. Even the manual recommends you drain the oil via the drain plug 'if you can get it out', then suggests you use a siphon hose from the top and not tamper with the drain plug.
C

I second to GregSY comment about 1/8" NPT plug. I made to my car rear diffrential these threads and used socket head plug. It was almost flush with the case which is vital as otherwise it might hit something being the lowest part of a car. 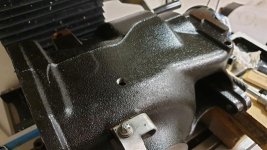 IME, most all straight threads that seal a fluid or gas with a copper washer or O-ring that are not inch threadforms are straight up metric pitches. M12x1.5 is a real common metric drain bolt/banjo bolt/o-ring style connection thread. So is M16x1.5.

I have never seen BSPP in actual use anywhere, but that doesn't mean it's not out there. I just wouldn't expect it unless someone was trying to make something nobody anywhere had a tap for.
Click to expand...

BSPP is fairly common on the scientific equipment I run into, especially drain plugs on vacuum pumps for some reason.

7 mm wall is plenty thick for a 1/8 npt pipe plug. Bonus, tap drill is 8.61mm. Pipe plug can be purchased with an internal hex for low profile. You are on your own for a British equivalent.
G

Metric pipe is British pipe, so you see it around without even realizing. THe Asians do tend to use straight metric thread for fittings that would be BSPP
R

98_Martin said:
Any recommendations regarding the plug? A low-profile allen socket shoulder plug? Or a grubscrew/plug fitting with some sealant/Teflon tape?
Click to expand...

The first picture looks like something I've seen before. The tip was drilled and a magnet was inserted.

Your fill nozzle reminds me of a custom brake bleeder. The small cylinder is hollow inside with a spring and a metal ball. When the flow goes one way
the ball leaves it's seat. When the flow stops the spring forces the ball back and no flow is permitted.

Otherwise just leave the threads straight with nothing else.
G

The real issue with the existing plug is that it requires a machined flat to seal properly. That's a rough casting, and while you might get it to seal for a while with a copper or rubber washer/o-ring...it's always gonna be a fresh discussion each time you remove it and reinstall it. Rather than relying on the flat for sealing, the NPT threads handle the sealing duty and the exterior surface can be cast-rough without having any effect.

I'd use NPT threads on an Allen plug with a few wraps of Teflon tape. Clean the case with a bit of carb cleaner, blow it dry, clean it again, then install the plug.
R

98_Martin said:
The question I had was regarding an oil drain I added to my Jaguar X-Type's AWD transfer box as the engineers/marketing considered this assembly sealed for life and therefore didn't design one into it. That of course isn't the case as oil doesn't last forever especially when it's only able to hold 600ml and lives beside the exhaust.
Click to expand...

Not that I don't appreciate what the Brits did for us, like the jet engine, the Harrier, Fish & Chips.

I would have expected that a motor car company like Jaguar would know what they are designing by now. After years of experience they might have decided that the auto is more
reliable without a drain plug. They have taken apart a fair share of cases and probably look at all the statistics.

Ever notice that the stock oil drain plug on a car is in a location that is not going to allow full drainage.
That little extra crude that stays in the case eventually wears out the engine faster.

On motorcycles you just lean the thing over if it's not too heavy.

I think the lack of drains is not so much a conspiracy, but a result of several factors. First, it saves 5 cents per car. That means enhanced bonuses. Second, it encourages normal people to not work on their own cars, which brings more money into dealerships. It also encourages people to trade in their car sooner on a new car. All those are examples of how 'smart' companies have learned to have their customers serve them, not the other way around.

If you think it's ethically questionable, understand that the automakers are business people who are forced each day to look at model companies on the cutting edge - Apple, Google, Facebook, Microsoft - who have customers trained to accept poor service, poor function, and to provide a never- ending stream of revenue.


If there's any good reason to no drain plugs, it lies in the fact that a few customers have been known to drain the oil and replace it with out-of-spec oil. That causes a failure, and lots of bad feelings and finger pointing. But that doesn't happen too often.
You must log in or register to reply here.

May 16, 2022
Tyrone Shoelaces
T
B
Off Topic: Water got into hydraulic jack, how to clean.