I usually don't venture into the Manufacturing in America & Europe section, but I thought this was the best place for this topic anyway...

Without starting a political flame war, I thought the picture chosen for this article was interesting. It shows Kim Jong Un & friends in a machine shop, in front of a CNC mill with 4th axis - Anyone know the brand? I'm guessing something Chinese perhaps? 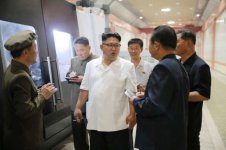 Hyundai?? Samsung?? Would be my guess. Hyundai actually is a really good machine from what I hear?

Reuters ran a story describing the history of CNC machining in North Korea a few days ago. Apparently they started reverse-engineering imported machines in the 1990s and from there developed their own industry. Seems they write pop songs for karaoke performances about them -- those parties must be a real gas

NK is also known for running numbers of agents into the south so probably they also get some authentic Samsung tech info which could be integrated with their own work.
J

now if we could only combine that picture with the recent thread about parts flying through the glass, hmm

I guess rocket boy did not see the NO SMOKING sign. Bet its a US brand of cigarette.

uhhhh, really, so there are no agents from NK going to SK, really.

Should they be, no doubt.

But not since 1951 or so, and then under the gun of Chinese soldiers.


Lets not be silly here, NK must steal its tech, and it most likely does so from the south, using agents, unless you think South Koreans are somehow eager to help build bombs
G

Bill strikes again. Speaking of "one country", how about "thermite/monarchist/seamoss/mattij".
G

It is easy to learn from past mistakes. It seems much harder to remember those lessons. Viet Nam, Laos, Iraq, Afghanistan, et al
G

I'm not going to re litigate the Korean Conflict, war, police action, but to maintain there are no NK agents is just silly

That pic is probably photoshopped.
7

SeaMoss said:
To call them "agents" or "insurgents" or any of that other crap, that's what's silly. They happen to be the people who live there, and have for the past several thousand years.

Unlike you, who live ten thousand miles away and don't know a damn thing about the place but still feel you have the right to decide what kind of government and what kind of society some other people can have.

Meanwhile you elect Donald Trump and fight over whether Social Security is "affordable". Maybe you guys should fix your own roof before you go pointing fingers at other countries ?
Click to expand...

Gotta hand it to Putin's trolls, they are persistent.

But what's hilarious is, I just read that George Weapons of Mass Destruction Bush is calling Mr Trump a liar

If that's not irony, then the Oxford English Dictionary made the mother of all mistakes

Something that never happens in your Russian paymasters' country, where people who criticize President-for-life Putin end up dead.

Those guys with the notepads are not friends, just fast food attendants writing down his take-out order for shark fin soup.

Think you guys would do really well to remember what some of the hobbyists have in there garage as very much home built cnc's, then imagine what you can near effortlessly do with a vast labour force and serious budget + the manual machining capabilities - casting capabilities already available near anywhere on the planet. CNC's are a very simple problem to solve for someone - some country with the determination to do what NK is doing.

IMHO it would make more sense to just sell them the CNC's, at least you get to make some money out of em that way. My understanding of nuke weapons is the weapon parts relatively easy, its the raw materials to make that weapon that really takes the man power to pull off. In some ways the more countries with em and the capability to level the playing field probably makes the world a safer place. Because yets face it you guys seam to chose some really weird options to lead your country! No country with nukes has ever been attacked, whilst several people don't agree with it, to me peace is all i want, if everyone being able to dish out mutually assured destruction makes that peace happen so be it.

Your current leader is mad enough to try and piss em off and go in there once again. If this stops the bonkers deaths on both sides, hows that a negative? Look how many you lost fighting the so called war on terror, that was hardly a sound judgement either. The fact that my weak ass government then follows you is what really pisses me off! To me most of the wars over the last 20 years achieved very little for world peace or stopping people coming to harm
You must log in or register to reply here.

Jul 11, 2022
ATI Racing
A
J
Looking for advice on a new CNC mill for arts/prototype work in shared shop space
2