I've always had an interest in model trains. I got a Lionel train for Christmas when I was 4 back in 1964. The next summer we went to a regional amusement park (Roseland) and that's when I first laid eyes on the parks Miniature Train, and got to ride it. As any "train nut" can attest to, it was love at first sight. That train was built by the Miniature Train Company in Rensselaer IN. They were a faithful scaled down copy of a General Motors F3 Diesel.

A picture of the Roseland Park Train in Canandaguia, NY sometime back in the 1950's? 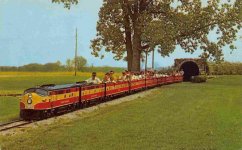 So back in the late '90's I began researching these Miniature Train Company trains again. Historic company information suggests there were 240 built, about 70 survive, and around 50 of the 70 are in operating condition. Any I found for sale were way.....way beyond my ever thinking about owning one, including the basket case abused ones. On one of the forums back in the day, I heard about there being 'some' in Mansfield, PA at a campground. I checked it out, and went there, talked to the owner and rode their train. First time since Roseland about 40 years prior. It was.... very.... cool. And since then I've been to Knobles and rode their magnificent "Pioneer" trains, a collection of steam outline and G16 "Diesel" F3 locomotives as well. Dreams live on, real possibilities fade.

But recently, a train for sale popped up on Marketplace, the usual rough condition, and with a $20k price. Yes, they do sell for those prices even in rough condition. I saw it sit on Marketplace for weeks. Then I inquired about it, and found out it is a remnant of the campground in Mansfield, Pa, owned and recently sold by the son of the deceased former owner. We conversed, and I told him about visiting the camp years ago. As we spoke and reminisced, I could tell he understood my keen interest in these trains and told me I should just come have a look. So I did. He prodded me to 'make an offer' but I said I didn't want to insult him, and declined.

I couldn't stop thinking about it, and finally actually made an offer that was somewhat less than the asking price. I thought I'd get a 'laugh off' and a 'thanks but no thanks' reply. But he came back with a surprising counter offer. Bottom line, we were actually able to meet at a middle ground figure.......

And (I still cannot believe it) but I am now the owner of a Miniature Train Co. train set, engine and 3 cars! Including the rear Observation car. 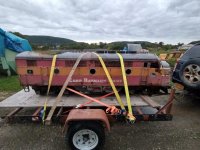 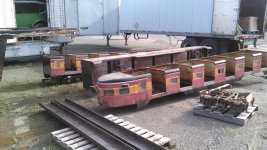 A lot of work will be required to bring this equipment back into operating condition. But to me, that is half the fun. Some engineering upgrades and improvements along the way will be even more interesting.

The data plate is missing on this train set, and the build number isn't in the placards on the engine nose. No other way to know it's history, other than (luckily) the name on the side still being readable and not painted over or worn off.

In 1999 I sent for an information package on the Miniature Train Company. Included was a list of sales to customers from back in the day. So last night after a hectic day of loading and hauling I sat down and went thru the list. Sure enough, train set 920 was sold to Camp Baumann in November 1957. As silly as it sounds, that was a very cool and even a bit of an emotional moment to actually see it listed in the roster from all those years ago. I was very tired as well......that's my excuse. ha! To me, these trains represent Americana, and that gets me excited when I think about the past.

Holy cow....They even copied the trucks to scale....
G

It's a simple thing, but those trains bring fun to lots and lots of kids.

I will add to that's that really cool. I rode one in Toledo Ohio about 1964

Milland said:
That is cool (we never grow up, do we?), but what about track? Did you get any, or is it easy to DIY?
Click to expand...

No track. New rail is aprox. $10 PER FOOT at this point. Used is out there. But there's 1/3 of a mile of track on the ground located 20 minutes from here.

I didn't see any mention of how they are powered?

GregSY said:
I didn't see any mention of how they are powered?
Click to expand...

They picked the Wisconsin V4 purposely because of the long stroke and sound. At idle, with the whine of the oil pump gears, it does give the illusion of a real diesel locomotive idling and the sound of the turbo-supercharger "whistle". Power wise, it's way overkill. Some have been re-powered with various engines including Kubota diesels. And some have been converted to hydraulic drive, replacing the maintenance prone worm drive axle gear boxes. The wis-con is not one of my favorite engines by no means, but I will work with it to keep it as original as practical.
L

Don't know if there is any connection, in San Antonio, Texas in Breckenridge park, they run several of these miniature rail road trains daily. At least, they used to. There's also one in Herman park in Houston, too. I don't think that one is as authentic and the one's in S.A. I've ridden on both.
N

What a lucky break for the OP! I also love model trains, but my budget won't permit the scale of the OP's setup. I have to be satisfied with G Scale, 1:22 with mostly LGB rolling stock. I have aout 150 feet of track in the second floor of my barn with12 locomotives, everything from 0-4-0 switchers to an F-7 GM Diesel. Lots of fun it is.

There is a club in Sacramento that has a layout of track in a park and they run trains of the OP's scale periodically. I also know a machinist in the Sacramento area who builds scale steam engines to order. He has the wheels and other iron parts cast locally and machines them to suit. They are way out of my price range, though, like starting around $25K and up.
R

dkmc said:
No track. New rail is aprox. $10 PER FOOT at this point. Used is out there. But there's 1/3 of a mile of track on the ground located 20 minutes from here.

No track available at the campground you bought it from? At $10 per foot a mile of track would be quite expensive.

Awesome stuff dk! Keep us posted on your rebuild progress.

I’ve always had a “thing” for HO-scale model trains, thus the full-basement, double-deck layout that I’ve been building since 2012.

It takes 12+ guys to fill all the jobs during an operating session — which can last 6 hours or more!

The railroad has about 90 locomotives (in 3 and 4-unit consists, most with onboard sound), 500+ cars (mostly coal and empties), is operated with wireless DCC (digital command control), and the single-track (with passing sidings) main line is a 400-foot run. 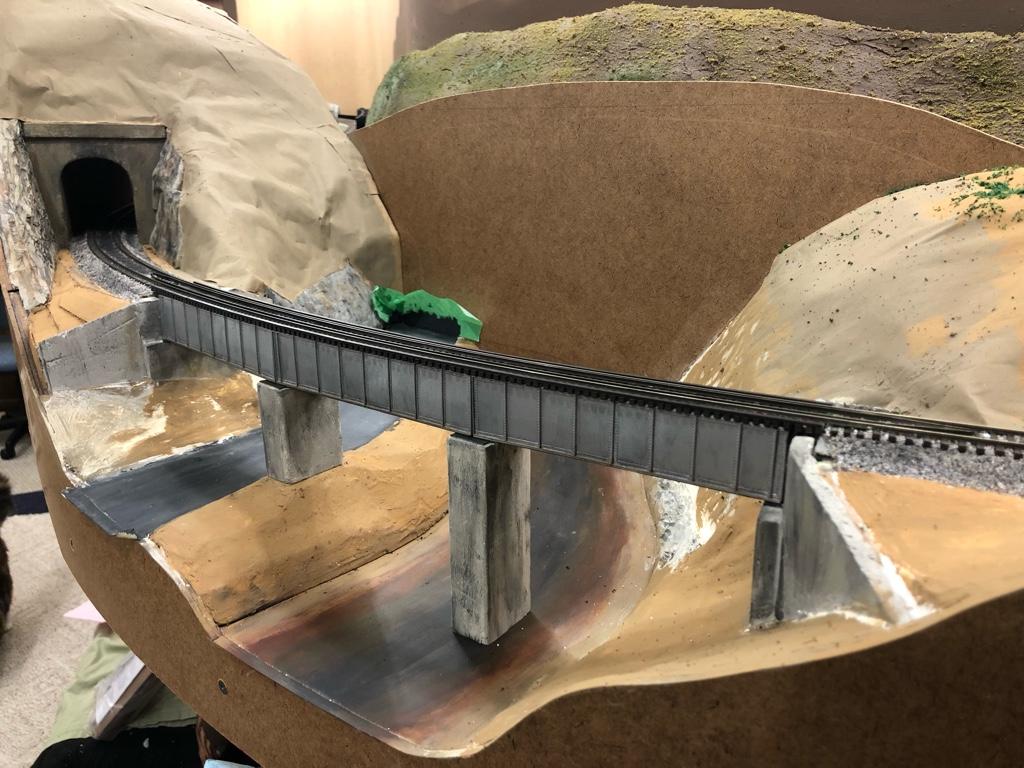 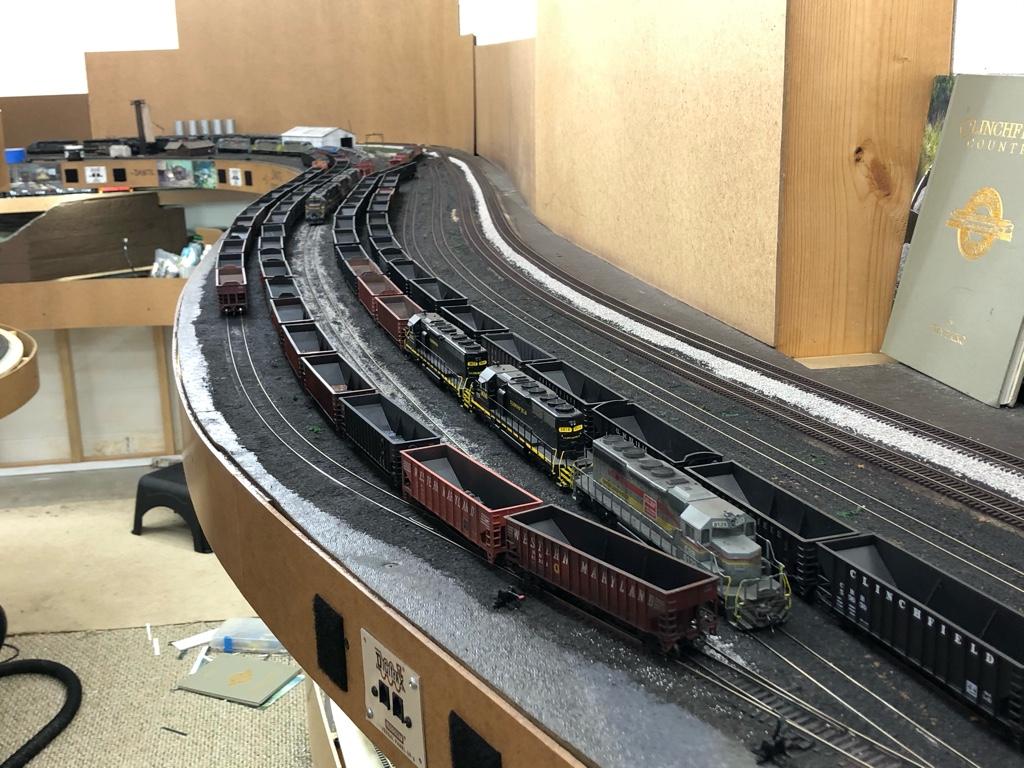 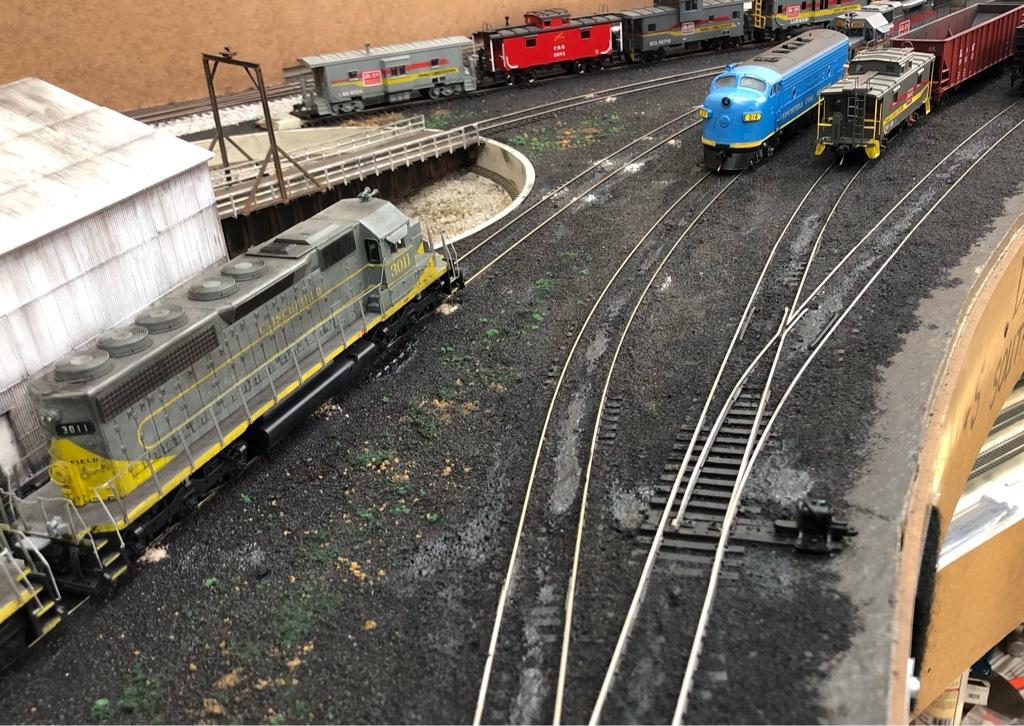 4GSR said:
Don't know if there is any connection, in San Antonio, Texas in Breckenridge park, they run several of these miniature rail road trains daily. At least, they used to. There's also one in Herman park in Houston, too. I don't think that one is as authentic and the one's in S.A. I've ridden on both.
Click to expand...

I rode that train many times as a child, we lived about a mile away. It is also the last train robbery in Texas
50 Years Ago, There Was A Great Little Train Robbery In San Antonio | TPR
S

The OP did not say track was $10 per foot, he said rail was $10 a foot. It takes two rails per foot, plus cross ties, plus gravel, plus grading and installation. I would guess $35-$40 per foot all in.
D

Tried finding some images of the original Brackenridge Eagle (matches op's train), not much out there. I think it was still at SA zoo about 20 years ago, but maybe its been longer. I wonder where it is today?

Very obnoxious guy who used to be local had two 2 1/2 foot steam engines he bought from the Westfield sugar plantation in Louisiana. 0-6-2 "Bertha' and 0-4-2 "Rosa". Half a dozen cane cars, a couple of complete switches and extra frogs, about a half mile of track, a stationary steam engine, an 0-4-0 standard gauge diesel switcher, and several extra wheel sets.

Bertha had a bad boiler, Rosa was operational. I made a bunch of small replacement parts for Rosa.

He left it all here when he moved back to Denver.. His folks sold it all to a collector.

reggie_obe said:
No track available at the campground you bought it from? At $10 per foot a mile of track would be quite expensive.
Click to expand...

I have land for maybe 1000-1500ft of track.
I should clarify the campground was sold and is still in operation, including the railroad. There are (I think) two S16's there (steam locomotive outline same chassis and power plant as a G16) and one G16....the one I rode years ago. This train I got was a spare and never ran at the campground. No rail available from the campground. However, the seller that sold me this train said he has around 8000 ft of rail at another location, and it is for sale at $4 per foot.


cnctoolcat said:
Awesome stuff dk! Keep us posted on your rebuild progress.
I’ve always had a “thing” for HO-scale model trains, thus the full-basement, double-deck layout that I’ve been building since 2012.
Click to expand...

I have seen the threads you've posted before on your railroad.......empire, and it is totally awesome!

dalmatiangirl61 said:
Tried finding some images of the original Brackenridge Eagle (matches op's train), not much out there. I think it was still at SA zoo about 20 years ago, but maybe its been longer. I wonder where it is today?
Click to expand...

When I get a moment, I will look thru the sales list and see if I can find it.
You must log in or register to reply here.