Just ran across this photo, WTF!! 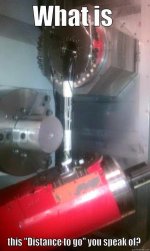 I just came back to PM after being on a Formula 1 forum, I had to recalibrate quickly to parse the thread title...
V

No picture, but had to repair a Mori AL-2 that you could not open the door because the chuck was wedged up against it. Crash broke all but one of the bolts holding the headstock to the bed. It's what happens when you try to face the end of a 6" diameter steel slug ~14" long on an 6000 rpm 8" chuck machine using softjaws and forget to put a G50 in to limit the spindle speed.
B

No pics, as it occurred long ago in a shop I used to work in, to the previous operator. SL-7 Mori Seiki lathe, knocked the entire chuck off. 21" SMW air chuck. Lathe was located just outside the office of the shop supervisor. I bet that got him on the floor in a hurry, if he wasn't already. Crew said it sounded like it was coming through the wall.
I had a similar experience. Older Fanuc control, same machine. You had to load a "Home" location into the program, to tell the machine where to go to change tools. You had to remember it was a negative Z number. Positive Z took it TOWARD the chuck, not away. Luckily, I was single blocking a setup, saw it take off, hit E stop before it did much. Got one tee nut knocked off the chuck. Plus my underwear took a beating.
D

not exactly a crash but a long drill that broke and went flying through monitor of machine next to it. long drill caught on tool changer door.
.
luckily nobody was standing in front of monitor at the time

Well that made me cringe. But... does that strike anybody else as quite a fragile connection for such a crucial machine element? Especially for (what looks like) a Mori?
D

gregormarwick said:
Well that made me cringe. But... does that strike anybody else as quite a fragile connection for such a crucial machine element? Especially for (what looks like) a Mori?
Click to expand...

.
many a manual lathe in back gear if tool runs into chuck severe damage can occur even breaking loose head stock connection to lathe bed. even if lead screw shear pin shears parts can jam against one another and heavy part moving inertia can be extremely powerful
J

Rstewart said:
Me thinks the operator said even more than that as he shit his underwear lol
Click to expand...

What do you think the BOSS said...?

Jashley73 said:
What do you think the BOSS said...?

Don't let the door hit you in the ass, right after they rolled his tool box off the loading ramp.
T

Hmmmm...I wonder if the guy running it thought...


EdwinNJ said:
Is there anything more involved in set-up?
Click to expand...

So we had a "programmer/setup" person do this to our brand new ST-30 within the first month of getting it into our shop. 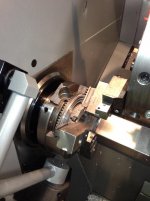 Needless to say that was a fun day.

JustAbout said:
So we had a "programmer/setup" person do this to our brand new ST-30 within the first month of getting it into our shop.
View attachment 150397
Needless to say that was a fun day.

So that's what a chuck looks like on the inside

JustAbout said:
So we had a "programmer/setup" person do this to our brand new ST-30 within the first month of getting it into our shop.
View attachment 150397
Needless to say that was a fun day.

Scroll chuck in a turning centre?

Probably would have ended up that way sooner or later regardless...
R

Probably would have ended up that way sooner or later regardless...
Click to expand...

Actually no. We use a scroll chuck due our parts being aluminum and usually under 1" thick with an OD anywhere from 3" to 10" in OD size. Sometimes as thin as .250". A standard hydraulic chuck would either crush our parts or never keep it in the jaws with such a light PSI needed. When things are properly taken care of the chucks will last a long time.

Unfortunately it wasn't a rapid issue. This happened due to the setup person not tightening the part sufficiently and as the part came out of the jaws it sucked the tool holder into the soft jaws.

Rstewart said:
5% Rapid Is for pussies!!!
Click to expand...

???? You can slow down rapids, that info is priceless.

Robert
You must log in or register to reply here.

1996 Hyundai HIT- 8S lathe… where is the hydraulic pump located ? (For the chuck)