Very cool, I would like to try out something different.
I did a quick check of how adding a counterbalance effects the SE. With the unmollested Foster SE on the surface plate it pivots at the 1/3 points like it should. When the counterbalance is added it pivots near the center of the SE and close to knife edge side. So this confirms what Lucky found, it is definitely having some effect. Next I rested the SE on 123 blocks and indicated the bottom surface near the edge with a 0.0001" gauge. The needle moves about 0.0003" across the scrape marks but if I look at only the high spots it appears flat within about 0.0001 between the 123 blocks. I could probably come up with something using a small gauge block that would improve the measurement. When I added the counterweight (following photo) I think I can tell the center area of the SE moved down but only about 0.0001". When I have been checking for alignment I have normally been using a 0.0005" indicator so I concluded the SE is still strait enough for testing the dovetail. Here is a photo of the counter weight installed with a simple clamp I welded up. 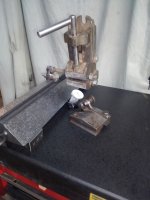 When I first install the counterweight I adjust it so the assembly balances on a thin strip of wood that is located near the center of the surface I want to mark up as in the following photo. When I set the SE assembly on the surface I am testing I can do the hinge or pivot test, initially I found the pivots were too close to the ends so I scraped a the ends of the saddle dovetails a little more. I guess if I wanted to refine this idea further I could touch up (rescrape) the SE with the weight added however I am just trying to get the dovetails good enough to get a full range of movement, not trying to make the dovetails inspection grade. 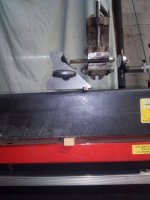 I should add a disclaimer that I am a beginner self taught machinist and in no way suggesting this is the best or correct way. It did seem helpful to me and I was curious if others had done or seen something similar. Everyone's comments have been helpful. It seems it would be possible to make a custom SE that would balance on most any surface that could be held level but it would be pretty specific to that one part.
I notice I tend to bounce around some, I work on one surface and get it way better than it was, then move on to the next surface. Sometime I end up coming back to the first surface. Knowing how good is good enough is learning experience. On a related note, the cross slide and saddle are progressing, a test show nice smooth movement over almost the entire range of movement. It gets very smooth if it is oiled before assembly.

Remember you are scraping a lathe that the original spec was .0002"in 12". Another thing a pro does when they are done they scrape the center of the moving part or shorter side of the ways low in the middle .0004" to .0008"" depending on the machine so as it wears in gets better. Dirt penetrates under the ends and as it rubs with oil and dirt the end 30% of both ends wears faster then the middle 40%.
You must log in or register to reply here.

Q: Technique or tool for spreading blue on a dovetail