Powermatic MVN spindle rebuild - or not?

I messed about with the spindle in my MVN the other day. Adjusting preload and adding grease. Ended up adding too much grease. Now the bearings are churning grease and getting hot. Can't seem to find my IR thermometer at the moment but at 2000 RPM the spindle heats up to the "uncomfortable but tolerable to touch" range. Not quite "too hot to touch." No-load motor loss is 360 watts. 1k RPM is 450 watts. 2k RPM is 620 watts. 5k almost gets up to speed but trips the 15 A thermal-mag breaker protecting the branch circuit just before it gets there. Not sure if that's new or not - never tried 5k RPM until now.

Wondering if a spindle rebuild is warranted at this point, and if so, what exactly the process would look like on this machine. This is the only machine in my shop that I haven't already rebuilt from the ground up and don't already know inside and out.

...Or are these temps low enough to just "let 'er buck" and wait for the excess grease to poop itself out naturally through the spindle nose? Grease used is a calcium sulfonate No. 2 with moly. (Mobil Centaur Moly 2.) Thinner consistency than whatever was originally in there. Kicking myself for using moly in a rolling element bearing. It's all I had on hand and I didn't read up on moly in rollers until after the fact. You live and you learn. Then again, the bearings are 50 years old anyways so if I end up having to replace them a little earlier because I used moly then whoppidy-doo, you know? An excuse for fresh, new spindle bearings.

Its not a huge deal to remove the spindle and wipe out the excess grease. Don't need to pull the bearing or anything.
W

Well, actually its a Burke, and must be why Powermatic put their name on it! That Millrite is probably one of the finest undersized Bports ever built. Cut my teeth on one many, many years ago. I seem to recall we actually ran a spindle oil on those models. Been too many years. Hopefully yours is R-8 as the B/S 9 was very common

I think I would clean it out and re-grease lightly with the white lithium that is called for.
L

I had to look it up. A Burke made, rebadged, mini copy of a bridgeport mill. I assume about 2/3 size?
AKA Burke mini mill
Bill D

Here's a pic of the Burke Millrite I had. Many years ago. I believe it had a 27" Table. Must have been a lot of short Machinist back in the day! Needless to say; it was a strong, solid and capable Mill for its size. Lucky 7, if you search out Powermatic mill, they were always Green with the square head cover 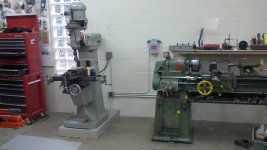 Not like they're brand new anyhow. 50 years' worth of mileage on them. They hum/whir quite a bit. Wouldn't hurt to toss new ones in there.

Then again, maybe my ears have been spoiled by all the plain bearings in the rest of my machines. Those are silent.

Re: The MVNs are slightly miniaturized, relatively basic Bridgeport clones. About half the mass and 2/3 the size. Many different options were available on them. Table widths up to 36", knees either 8" or 15", dovetail rams, spindle roll w/ or w/o worm drive, spindle pitch, power feeds, tapered gibs, rapid or micrometer quill feeds, riser blocks, 4-pole, 6-pole, 8-pole or fixed/quick-change gear-reduced motors, etc. all sold as options to fit each machine to it's owner's budget and needs. Almost no two are exactly the same for that reason. Often purchased as homeowner machines and now prized as such since they are usually lightly worn compared to something like a second-hand Bridgeport in the same price range. (Mine for instance still has some of the factory flaking visible in the centers of the ways.) Also because they fit nicely in small home shops where open space is a luxury. The guy I bought mine from had three or four other buyers interested who were willing to drive cross-country to pick it up. I only got the sale because I was local and therefore easier to deal with.
Last edited: Aug 14, 2022
W

Just run the kid at low RPM for a while to disperse the extra lube and then watch for any heat build up.
FWIW; a 55 yr retired veteran Master Machinist set my Millrite up 20 yrs ago and spoke very highly of the 'miniature' machines capabilities, not to mention the 2 lb chips he peeled off with it; Enough Said!!
Last edited: Aug 15, 2022
You must log in or register to reply here.