I recently wore out the pinion and spiral bevel gears on my 20? year-old Milwaukee Super Magnum angle grinder. It has served me well and I was able to find replacement gears without difficulty on several sites for about 20 bucks. What I did not find, despite quite a bit of searching, was information on how to remove/replace the old helical gear. The pinion gear is very easy as it is simply retained with a nut and slides off its shaft using only your fingers.

It turns out that rather than being on a keyed shaft like my larger Makita 7" grinder, the spiral bevel gear on the Milwaukee is a very tight press fit. I removed mine by carefully cutting the old gear off with another angle grinder and did avoid damage to the spindle. But, I will say cutting into the spindle would have been easy, so I would recommend pressing it off. So, you don't have a good-sized hydraulic press? No problem. I found that my Kurt milling vice was just equal to the task. All you need for disassembly and reassembly is a roughly 2" diameter (a little smaller or larger would work) 1.5" length of pipe. Press out the old gear, apply some lube (Moly grease is said to be best and is what I used) and press it back together. There is a shoulder to limit the sliding of the gear and get it to the correct position.

I will not go into any detail about the rest of the procedure as it is pretty basic stuff other than to say NLGI type 1 semi-liquid grease is recommended lube for the gears and it would be good to get some on hand before doing the repair. But, for me, the key was finding that the job could be done with the milling vise (my Wilton bench vise has too coarse a screw and so does not produce enough pressure without using a cheater bar. Hate to break the vise by pushing it beyond its design limits.) 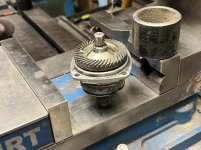 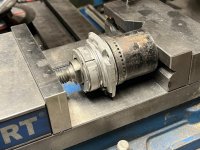 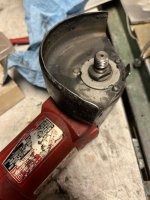 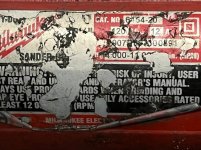 
Added: I had originally incorrectly termed the large gear a "helical" gear but I got a very kind private message gently advising me of my sloppy terminology from EmanuelGoldstein:
"dg - those are not helical gears. They are spiral bevels. Helicals are on parallel axes, like spur gears with twisted teeth.

If the pinion is off-center, then they are hypoids, but I'm betting they are not."

I'll defer to him on the correct terminology and I corrected my title to reflect that. thank you, Emanuel.

Interesting that I tried to correct the title by going to the "Go Advanced" page and was able to edit the title there to show "spiral bevel gear" but that correction does not carry over to the thread listing. Oh well, I tried...

Denis
You must log in or register to reply here.

Where can I get info about gears, specs, angles etc.

"Correct" gear cutter does not match gear profile (What did I do wrong?)

S
Gear hobbing process question, what causes difference on one flank vs the other
2