I'm in the process of fully rebuilding a Walker Turner 900 drill press. The machine's castings were all chipping and also I got a new (old) belt cover that was completely unpainted, so I pulled the whole thing apart and planned to strip and repaint.

I chipped off most of the paint (there were multiple layers) with a scraper. In most areas it came off in chips about .75" across, and underneath is a combination of raw iron and some of what I assumed to be the original paint. I sanded with 60 grit, scrubbed everything with degreaser, rinsed it with water, and dried it out. The result was not paint or rust free, but it was free of big chunks and felt like it had been pretty well prepped. 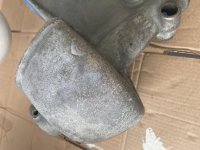 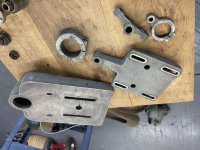 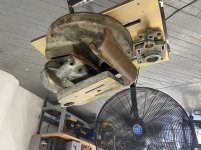 I checked the paint that was left with rubbing alcohol, and it seemed to come off easily - so I assumed that it was water based. I then brushed on an acrylic primer - a Sherwin Williams Pro-Cryl Industrial. I don't have much experience painting cast iron, but it seemed to me almost immediately that the coverage was blotchy - almost like I was painting over an oil base. Then, over the next hour or two as the primer dried, little rust spots started appearing almost everywhere. 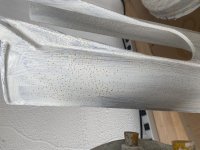 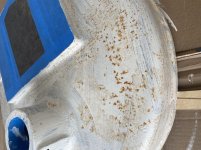 I have an oil topcoat planned, but now I'm worried. Were the remnants of the original paint actually an oil coat? And did I totally mess up by not using PickleX under the primer? I'm putting a fair amount of work into this machine, and don't want to end up with flaking paint again. Any suggestions appreciated!

Why did you not strip to bare metal? I'm pretty sure the original paint was oil based. I would strip bare, soak in degreaser, then soak in a rust remover if there is any rust. The pic with the parts on a pallet being blow dried, has me questioning how dry your parts were, cast iron is porous and can hold lots of water, I would suggest a drying oven, or using the hottest water you can stand for the final rinse so that they flash dry.

My suggestion would be to strip, rinse, repeat.
G

Stay away from latex.

start with auto body primer and see if anything lifts, after doing what has been suggested

Oof, I wish I had an oven that could fit these at my shop - or hot water service for that matter. Heck, I don't even have a sink big enough to submerge the base in.

Hard to judge size by pics, but I have done a few WT drills, unless that one is considerably larger I would think those parts would fit in a regular oven, find a cheapy on CL. I used oven in last shop all the time, in winter it worked great for warming parts before painting too. They work great for baking paint too, just make sure there is an exhaust fan over it, produces wicked fumes.
J

I'm a bit suspicious about the primer, it does say on that web page that it is for steel as well, but it is water based, I'd never chose a water based primer for steel/iron, I'd use something epoxy based.

And I'd avoid water when degreasing as well, mineral spirits to wash off most of old oil or grease, (following only in very well ventilated area) then brush it down with toluene, watch for oily spots when it evaporates off, repeat where necessary, sand it where needed, then wipe down with acetone and prime with epoxy, that's my method.

Looked at primer link again, agree, water based primer on cast iron is asking for problems.

jz79
I'm not sure if there is something different about mineral spirits today, but I find it does a poor job of cutting old dried oils, where the purple cleaner cuts and dissolves it on contact, but it is water based. I use hot water to rinse and it flash dries, but am also in a very low humidity environment.
O

dalmatiangirl61 said:
Why did you not strip to bare metal? I'm pretty sure the original paint was oil based. I would strip bare, soak in degreaser, then soak in a rust remover if there is any rust.
Click to expand...

If I can make a suggestion : DO NOT soak cast iron in rust remover unless you are absolutely sure it'll not cause damage, long term included - 30 years or so ago I had some very bad experiences from doing that and with more than one kind of rust remover. In the worst case I could scratch the CI with my nail. But that was extreme...
J

jz79
I'm not sure if there is something different about mineral spirits today, but I find it does a poor job of cutting old dried oils, where the purple cleaner cuts and dissolves it on contact, but it is water based. I use hot water to rinse and it flash dries, but am also in a very low humidity environment.
Click to expand...

the only problematic oils for mineral spirits are the dried up remnants of water soluble cutting oils, there water based degreasers are the best, but with regular old greases and oils it works quite alright, quite safe to use, little to no odor, and leaves a bit of oily film for some immediate rust protection

I may have come off as a bit too critical of the water degreasers, they ain't that bad, and a little bit of flash rust isn't a problem either, epoxy will stick to it and stay there

in this case however, I think it is the water based primer that made the iron rust

p.s. in case or rinsing parts after degreasing, I once tested adding a little bit of baking soda to a spray bottle and spraying that on some steel parts after they were hosed down with tap water, it seemed to prevent flash rust from forming, but I'm not quite sure how well that dried up soda plays with subsequent finishing like painting
M

Modern deoderized mineral spirits are, in my experience, not as good of an oil/grease solvent as traditional Stoddard solvent. For careful cleaning I use L&R ultrasonic instrument rinse with a stiff brush. It is a mixture of Stoddard solvent and naptha.
S

If you’re going with Sherwin Williams, I’d highly recommend their Kem Flash primer. Great coverage, thins with xylene. They’ve also got a line of enamels to go with the primer. Great stuff all around.
M

trafficbikes said:
Oof, I wish I had an oven that could fit these at my shop - or hot water service for that matter. Heck, I don't even have a sink big enough to submerge the base in.

But, point taken! And good advice.
Click to expand...

If you have an old school trouble light with an incandescent bulb, put one of your parts off by itself and put a big cardboard box over it and put the trouble light inside. It won't go to 300F, but the casting will be warm to the touch.

If your problem were mine I would take your newly primed parts and put them in an electrolytic derusting bath. The paint and the rust will both be removed. After letting the electricity run overnight or for a day or two, take the piece out and scrub it under hot water. Really hot water. The goal is for the part to self-dry within 60 seconds. If that isn't practical, get a pump sprayer of WD-40 and apply that liberally. You'll have to wipe with paint thinner before painting, but it won't rust.

Keep asking questions. I still remember the thrill I got the first time I stripped a cast iron part and repainted it. It was just a tiny vise I got at a yard sale for a dollar, but when I was done it looked terrific. I sold it for five bucks to a guy at work and never looked back.

There are paints that you don't need primer for. On the low end, you could use Krylon Colormaster. It gets terrible reviews but I think they are bogus because I am using it on my current project and it seems great to me. It flows on beautifully and dries super quick. If you want higher quality, look for DTM paints. DTM is short for "direct to metal". I use that on outdoor projects. I buy it from Benjamin Moore.

Below are before and after shots from a subassembly of my current project. - metalmagpie 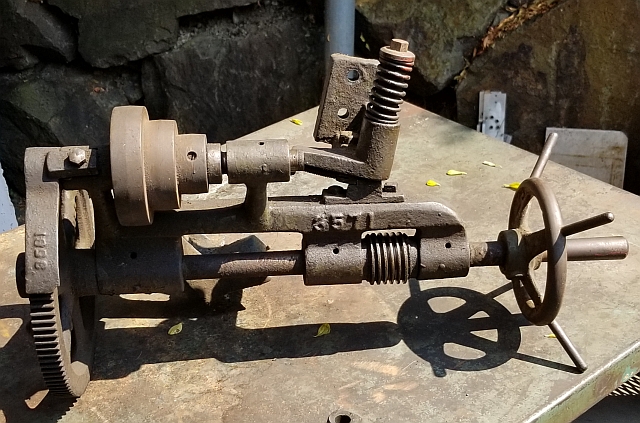 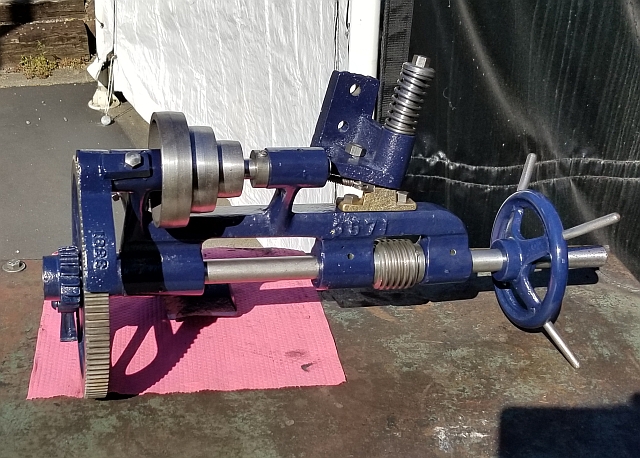 Friday at 6:33 PM
Shipp
S
A
Scraping materials other than cast-iron