1dogandnoexes said:
My goal is to get something which A, I can afford; B which I can move without a forklift; and C which can be scraped in the future. For the moment, I would have to use it as is.
Click to expand...

In order to scrape a cast iron plate efficiently and accurately you will need to have a granite surface plate to rub the cast iron plate too. A bench plate bends and is designed to put sannd paper on it to rub your machined part to, or to make measurements of the part sitting on top of it. Scraping a none webbed cast iron plate and getting it accurate is not going to happen. Your not going to save any money scraping a bench plate. You need to find a 3 point webbed plate that is designed for scraping. You can't reinvent the wheel here. Many auctions I follow sell cast iron scraping plates for $5.00 to $100.00. Or Granite tables. I had a student in Maryland buy a granite plate and he took it to a tombstone maker and he had the plate cut into granite straight-edges.

Richard King said:
You should start a new thread in this machine reconditioning forum. If you can include some photo's that would help the readers and ME understand completely what that machine looks like. You can call me too. I see your in South Dakota too, maybe you need some help out there?
Click to expand...

Will do on the post, I do have a couple pictures, and yes, FAR western SD.

1dogandnoexes said:
I have two machines, a lathe bed at 30" L and a milling machine table at 18" L, which are both badly worn. I'm looking at this as an alternative to a camelback, which I would have to purchase already scraped.
Click to expand...

all kinds of wrong roads to go down here.
STOP NOW.
forget about learning how to scrape by scraping the wrong thing first of all. listen to Rich, this is a bad idea. I'ts the wrong shape, VERY awkward to handle for scraping ways, and the wrong construction (and you would need the granite plate bigger than this anyway to do it). do you think you are going to save any money over the scraped camelback?
I'd suggest you get a lathe and mill that are decent to begin with, or just live with them and work around the problems. most manual machines throughout history used in repair, hobby and maintenance shops weren't perfect, but the work got done.
IF you are dead set to go down this rabbit hole, at least take a class and get the right tools.

P.S. for those looking to scrape actual steel, there is an Austrian gentleman on YouTube that goes under "an Engineers Findings" I believe, who has a few vids on this. he is a remarkable craftsman.
Last edited: Dec 4, 2022
G

hvnlymachining said:
Will do on the post, I do have a couple pictures, and yes, FAR western SD.
Click to expand...

Have you seen the portable single axis slides made by climax and versamil back in the day?

The job you're looking at sounds ideal for one of those. Bridgeport head mounted to a slide and mill the grooves back into shape right on the machine.

I think it was the other machinistboard.com forum where someone was just showing off a machine they built for a job like this using a thick steel tube machined to accept linear ways.

interesting idea, I'll have to look into it!

hvnlymachining said:
interesting idea, I'll have to look into it!
Click to expand...

I wonder... if the edges of the guide slot are reasonably intact, could you do this with a woodworking plunge router and an end mill.. or laminate trimmer. no need for the guide rail, just clean it up and send it down the slot? I'm stabbing in the dark here as I don't know the actual config of things other that some vague descriptions, but seems there is a real possibility to use what's there and save some SERIOUS time and effort??

I've started a thread with pictures now regarding this project, please refer to that thread in the machine reconditioning forum under "knife grinder steel way groove repair."

Steel is a pain to scrape by hand and Biax Power. If your hand scraping use a carbide tip ground at a 60mm / 2.4" tip radius and a neg. 5 degree rake on booth sides. If your using a Biax Power scraper use a 60 mm / 2.4" tip radius with a positive rake. Yes a positive rake, like a wood chisel - one side. Try to keep not to have a long stroke - no more then 3/8" for roughing and down to 1/8 for finish. I would deburr it with a dull file and med grit sharpening stone. Steel and ductile gets a lot of burrs and slivers in the fingers. I would wear some leather gloves when deburring.
Click to expand...

Started handscraping in the 80's because i was making a steel plate sled for small woodworking shapers. There was a local market and i was stupid. The sleds were machined from 1/2" steel plate (A36) flycut flat, and then scraped, so i could use that to scrape the top of the shapers in since none of them were flat. These were the little delta units, but a good machine, and shops set one up somewhere as a dedicated tenoner, using sleds like mine. Also had a set of scraped (by me) steel parallels to scrape the slots, since the tables never had straight parallel slots. And the keys on the bottom of the sled were scrape fitted to the table slots. I think i recall doing 7, for 4 different people and then came to my senses. But it was a good way to start.

Then my planes were made of ductile, and they were all handscraped.

Sometime at the end of the 90's when eBay came along, i won a Biax that turned out to be from Richard. He was not happy about it & refused to send it because i sniped it for cheap. We had an interesting phone conversation.

I watched and in a week or so it ran up again, so i sniped it again and got it for $50 less than the first time. This was when you could get a Biax on Ebay for $300 or so. (Mine was less) Richard was a grudging good sport about that, and sent it, and gave me some advice and comments on it. It had the cracked plastic but he had been clear about that in the ad. He had really done a good job of building it and new brushes, etc. I've liked him ever since.

The following project photos are dated May, 2003
All steel bed in my RAMCO widebelt sander. 16" x 26" wide. It's basically 2 ea 8" channel irons welded parallel/crossways to form the platen. Wear swale in front (farthest from camera) is aprox 1/16" deep. You can see by the way the machine is constructed, it was easier to level the machine and scrape it in place, than to remove, schlep somewhere for grinding, go back to pick it up, and then re-erect the frame.

As Richard says, those slivers & burrs are nasty. After the first pass, I wore padded leather gloves the whole time and can still feel a few embedded in the side of my hand when looking at the pictures again. 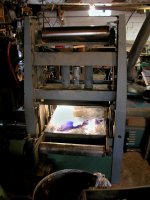 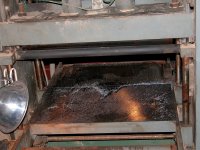 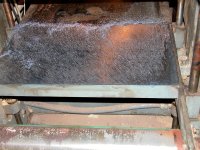 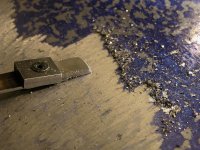 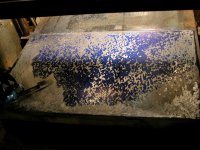 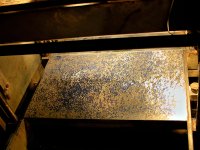 You have a better memory then I have. I have no idea what your talking about.
S

It's been a very good machine, Richard.
Not much pampering, as can be seen from the pix.
It's usually grunting and making chips as opposed to an easy life of tickling of spots.
Though with the planer in the shop, (& age) I have used it less for actually carving large surfaces.

I bought a 4' straight edge from you sometime after the Biax & still use it. Had to check it a few years ago after a lot of use, when i went to re-scrape my SB lathe. You were repping a shop selling off tools IIRC. You told me it was not scraped by you, but that the shop was somehow related or you had worked there and you vouched for them. At that point I think PM might have existed and you were not on, but people knew your name more.

That may have been Midwestern Machinery in MPLS. They had an old blue scraper and some straight-edges I sold when I was working there in the late 1990's and early 2000's when my wife said my traveling as interfering with our kids were little and it was to difficult, she could not handle them alone. I worked there on and off for about 15 years. When the owner Pete Platzer died, 2 of us salesmen and their controller bought the company. We ran it until I was asked to teach classes in Turkey for Spinner CNC Lathes of Germany where they built a factory near Istanbul. After that I started to only teach classes again.
You must log in or register to reply here.

M
What would be considered "typical" tolerance when scraping parallel and perpendicular?

A
Scraping materials other than cast-iron