I have recently run into an EX2059 - Safety Circuit Input Signal alarm on my machine. Now generally when we have issues with this machine it comes back to a worn out contactor. However having gone through the entire cabinet twice checking all contactors (Coils and contacts) as well as fuses, and breakers I was unable to find anything. So I thought being a EX2059 alarm it would likely be with my door safety switch. I check the coil which was fine and the voltage there seem slightly low but should be just fine at 23.8 volts. Just as a precaution I checked the board which the door switch plugged into and found something rather interesting, it would appear I have a diode right next to the plug for the door lock that has released it's magic smoke. However we all know how you can end up with rather strange smoke looking garbage on wires and such in these cabinets I thought I would run it by you guys and see what you think. Keep in mind I did manage to wipe most of the smoke residue off the diode while testing it, it did read OL one direction and about 480 the other direction however the ends look good and crunchy. I suppose it could have come from the resistor below but it appears to be in good condition. I also have not yet checked the back of the board.

Thanks in advance for your thoughts on this one! 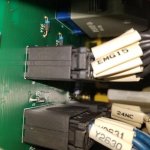 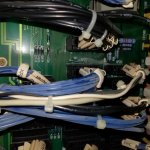 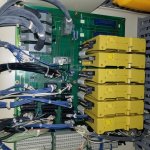 After reading through what I posted it occurred to me I should probably include which board it was. I have included a picture of the board's part number. 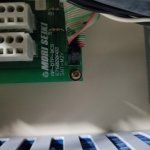 So another thing I have noticed is my interlock unit is not powering up (AP-SFT) I am sure this is all connected but I just cannot find where. I know this is a pretty out there problem but I am hoping with this bit more of information somebody here might have an idea.
R

How did you get it fixed?
E

Has this issue been resolved? Having a similar issue and looking for some help. Thank You.
You must log in or register to reply here.

D
it finally had enough