Some may recall previous posts; back in preparation for "Y2K" i was asked (hired) to participate in making steel shutters and "gunports" for a local backyard fort. I did not have a coldsaw, and made a hacksaw for the shaper, to saw to repetitive length, and to saw miters and angles in barstock.

The saw frame & set-up has been useful over the years for odd projects but thought it was fully retired at this point. Then this past week i was puzzling how to quickly machine internal slots for what amounts to a large expanding collet*. The old hacksaw frame was un-retired and served the purpose. Except for the need to slit a 1-1/2" wide hacksaw blade down to 7/8" wide on the surface grinder so it would fit in the 1" center hole of the part, it was actually a fast process. 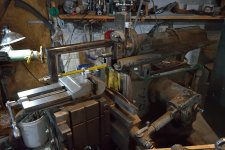 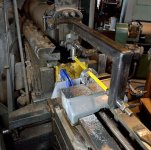 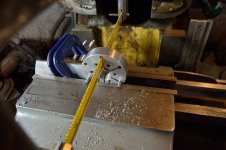 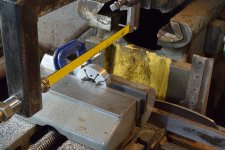 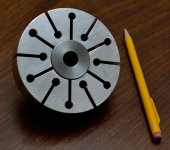 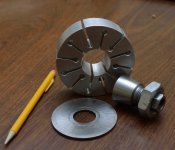 *large expanding collet: The jugs in my 2276 VW av-conversion were glued in with copious RTV by a PO. A local VW guru advised that that situation makes it very difficult to remove them without distortion or damage. I hope never to actually need to use it - but the heads are off right now, and if it becomes necessary, the hope is that this puller can manage.
Last edited: Aug 7, 2022
S

Great job!
An interesting marriage of two "obsolete" technologies, shaper and power hacksaw, proving their worth even today.

Excellent work, thanks for the pictures and ideas. In the event the expanding plug can't get enough bite in the jug to pull it, an adhesive between the jug and plug would probably solve the problem. Anything from superglue to various grades of locktite would solve the problem without so much force on the plug it distorts the jug.
M

Looks like the cuts are guided very well. They look "machined" as opposed to "sawn".

That is a great idea. I have used the die filer as a saw before, but that would not make as clean a cut as you got.
S

Laid it on 2 layers of typing paper, teeth to the rail, on the surface grinder.
Using an .060"abrasive cut-off wheel it was slit 1/2 way through, flipped end-for-end, and finished from the other side. I did then stand it between some mag parallels, teeth on a 1/16" aluminum TIG rod to the chuck, and lightly clean up the back with a regular wheel.

I bought a NOS box of 40 or so 1-1/2 x 18" blades "many" years ago on here & have used maybe 8 or 10 of them, including one in the scraping tools box that is merely used by hand or gripped with vise grips, to relieve in the bottoms of large V-ways when scraping.

The saw frame would take 16".
An actual Keller "accidently" purchased at a school auction a few years ago takes 14".
So i cut them to length and put the holes where appropriate with a re-sharpened carbide masonry drill. ('cause it was cheap & I used to buy a lot of them for my construction business).

Agree - for a smaller hole and less tall blade needed, i would probably make a holder and grind out a short stab saw. Considered it for this job, but the full saw frame was already on hand, known performance, did not want to get side-tracked making a new toolholder at the moment.

JST-
I considered the die filer, but the shaper is so much more productive for relatively large cuts, and it was easier to tool to register uniform divisions using just a simple side stop, and the tops of the existing jaws.

For small work, it might be easier to use the die filer. My Ideal brand die filer does have a top, powered frame, for sawing; and could take fairly narrow blades. But it does not have the slide-way control of the shaper toolslide, to automatically provide clean straight cuts. With manual control (feed) of the cuts, uniform registration of the 12 divisions becomes difficult without a different level of tooling.

Yes, the big issue with the die filer is that I would not get that clean a cut in any way. Sorry, thought I had made that clear.

I am frankly very impressed with the quality of cut. It looks in the pics like it was done on a mill with good sharp tooling, and then ground.

Once the fixture is taper-locked home, what kind of puller will you apply?

VW's have through studs.
It might solve some problems if they had base studs, and individual heads.

Once the fixture is taper-locked home, what kind of puller will you apply?
Click to expand...

The design considers 2 options:
1.) The reaction plate shown, snugged down & leveled over nuts on each stud. 1/2" -20 bolt or B7 althread pulling through the expansion collet. Fixture strap, or other "thick washers" over the access hole.. "Wiggle motion" can be applied by raising the nuts on the studs sequentially if it proves helpful.
2.) allthread through the expansion collet, tensioning a long piece of 1-1/4" pipe with square end to it. Stand at other end, lever, gyrate, & pull.

Again, i hope it is not necessary.

The reaction plate has other uses, including to hold cylinders down that are not glued in, and to find TDC for verifying other degree relationships. If surface ground, it could be used as a gage to verify both cylinder tops are co-planar. Though then using it as a reaction plate might not be advisable. 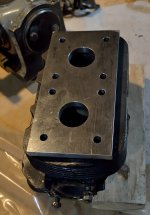 Another option: a very large slide hammer? Sounds like the area of contact held via the silicone sealant can't be more than 3 or 4 square inches. Long stud through the expansion collet, and a sliding weight along its length - 18 inches or so. Weight could be a piece of threaded black pipe with two caps, holes drilled in the caps. A few smart raps, who knows? You might also consider putting some valve grinding paste around the exterior of the expansion piece.
S

the silicone sealant can't be more than 3 or 4 square inches
Click to expand...

Bore is 3.7" ID. So lets say 4" OD x pi x 3/4?" depth => 9.4 in^2. Plus some more lapped over the slight flange. What is the shear strength of RTV slightly separating a tube within a tube? Really good high temp stuff? Aware of slap hammers, not intending to go that route.

I really hope to just lap the valves and put the heads back on until OH time.

Updates when they occur, other things to take care of for a few days.

Silicone is soft enough it will absorb a heck of a lot of energy from a slide hammer before it starts to separate.

Is the joint in question an ID/OD joint or just a face seal joint? If ID/OD, how much clearance? Agree that if it's 10 thou on the radius, and full of RTV, that'll be a tough go.

I'm hampered by close familiarity with BMW motorbike jugs, where the seal is between the engine case and the cylinder flange only.
S

Jim, I didn't mean this to go sideways into a separate engine project, it was just a fun note about using the shaper.

VW engines are a completely new subject to me, too.
But to answer your question, In the following catalog picture, everything shiny above the large dia fins goes up in the head, but rests only on the rim of the barrel, in a lapped joint to the head.

The shiny spigot below the small dia fins goes completely into the cases. In a clearance bore, but not a great deal of clearance. There can be spacers, to set things like deck height including for setting the CR. In mine, it is also filled with RTV. I joke that the guy must have owned stock in an RTV manufacturer. It is everywhere. He knew what he was doing and was good at it, but rather on the generous side. The RTV is not necessarily a bad thing*. Until it is necessary to do maintenance.

When trying to pull a cylinder, the through studs that box it in from 4 corners add to the difficulty. If you remove the through studs, the risk is dislodging the case savers, which if they go back in deep will hit the crank, if they come up above the case, will interfere with the cylinder seating.

Here's the dilemma: Due to short term storage in a neighbors barn that became longer term, and then the barn flooded due to misdirected water from a town road project in combination with a major storm, there is rust in the upper cylinders and valves. Some fairly ugly. Of course some of the local gurus were happy to tell me "you could have just run that, it would clean itself out". I will be happy to clean, check, and lap the valves and seats. Right now it feels to me that the less disturbance the better, below that. The tops of bores above the ring line can be cleaned/derusted adequately in place with no real risk. So hoping the heads go back on and seal without relapping the cylinder-to-head seal. 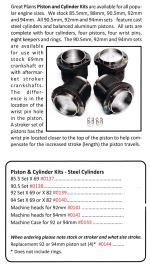 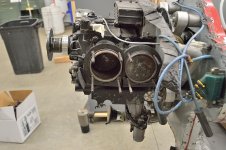 *RTV & cylinders: In conventional aircraft engines, -ANY- sealant other than a factory O ring around the base is prohibited. Sealant, especially RTV, but even including a mere coat of paint, will cause the fasteners to loose tension, and jugs have been known to depart the engine in flight from such practices. OTOH, VW cylinders are not flange mount; and apparently the practice is somewhat common.

Thank you for the VW education section, Stephen. Intesting design. I can see where the RTV could be an issue here. The only other possible solution I could imagine would be to chill the joint with liquid nitrogen, and harden the sealant, making it more susecptible to fracture. Would also shrink the sealant as well. A rag soaked over the joint area, with liquid poured over that could do the job. I've had luck removing aluminum pistons stuck inside jugs for BMWs that way.

Looking a the ad there, seems like the pull-down studs are covered with a tubular sleeve. I was thinking one might remove one pulldown stud at a time, and put a nut and washer over the it after passing it through the top of the jug . After all four are treated this way, unscrewing the nut against the underside of the jug would load the stud under compression and try to extract the jug from the case. 1) the studs are pretty small diameter and won't take a lot of loading, 2) those sleeves....

Best of luck on this.
You must log in or register to reply here.