Can anyone help identify this mill? I dont believe its a Jig Borer based on my research. It has V Ways everywhere like a mill and an adjustable knee.

I have searched everywhere online i can think of. Google Photo's, Facebook, Old Magazine Articles, all the catalogs on lathes.co.uk. I dont know where else to look at this point.

Would really love to know who made it.. All of the badges are gone. I was told it came off a WW2 ship... All the dials and scale are in inches. Its small but heavy. It has a universal table.

Hoping to identify it so I can find some old literature or pictures. I think its missing the belt guard. I would like to restore it as close to original as possible. I may even have the badges remade if I can find a picture. I love vintage machinery, including the history!

Thanks for all the help.

It may help to identify the machine if you can identify the spindle tooling type. Is there a collet or some sort of shank to hold a drill chuck or end mills?

It has sort of an English look to me, but that's a gut feeling only. Looks like the table tilts as well as swivels? Interesting machine.

It's not a mill I've seen before. Given the bolt on design for that vertical head and it's guessed at build date, a lot more machines like this were horizontal mills with sometimes having optional vertical heads. If that's true with this one it could be a fairly rare combination. And that at one time there was also a horizontal head it had as well. So checking websites with horizontal mill details might be easier to find one with that fairly distinctive shaped base casting. I very much agree with Larry about identifying it's spindle taper could help. And I get the same gut feeling as Andy that it might be English. Doubtful European with those inch based divisions, but not impossible if it was built for export. At one time Australia had a lot larger machine tool manufacturing industry than today so maybe? You'd have to join to post pictures, but this Australian based forum has a lot of knowledgeable members, Metal Work Forums That would at least narrow it down that it is or definately isn't Australian. Since it's set up as a universal machine, that to me indicates it was built by a larger manufacturer that had the design and machining capability to do so, and much less likely made by a short lived small manufacturer. No not much help, but that's all I've got for thoughts. After some further study of your picture, the X,Y hand wheels seem oddly over sized. If those are original, it seems an odd choice especially for the X axis since it's rim is above the tables surface. There handles are obviously non OEM. Your motor pulley needs to be lowered to align it with the spindle pulley. As is it will chew up that belt fairly quick.
T

Little more info. The spindle is a Morris SDH Quick Change "Drilling" Spindle. I talked to the only dealer in the US about the spindle... He said this spindle would have never been in a single mill like mine. They were used say at Ford on a production line where multiple holes were drilled all at once. He speculated that someone had one laying around, the one in it was an odd size, and decided to retro fit it. Possibly because they made have had a large amount of tooling on hand for the spindle. Also, they Morris spindle was not even produced until the 1980's in England... the mill def looks older than that. The quill is 3" diameter and had angular contact bearings.

To me, the mill is very well made. Some of the parts are very thought out/refined... while others seem pretty simple/basic. I have searched for clues all over the machine.

Here are some pictures of the Hand Wheels/Dials. They are def original and could not be replaced easily. Everything is machine to fit together and screw onto the axis screws. I think the x axis was def damaged at one point. I think they replaced the handle and robbed the dial from another hand wheel.

The hand wheel has a part # tag cast into it.. along with the main casting of the machine. They had to make more than one of these.. especially when they cast part #'s into the parts..

I have also inspected things that i thought may have been replaced/shop made.. but have come to the conclusion most everything is original except the motor and spindle pulley.. Which I am replacing with a different/better setup. 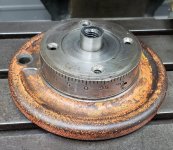 The Table Swivels and Tilts.

The whole saddle moves side to side. They robbed the dial off this hand wheel for the x-axis.

Alot of this kinda looks shop made, but i believe its original. When you take the brass pieces off, the casting is made a specific way to fit the pieces/gears.

neanderthal mach said:
Your motor pulley needs to be lowered to align it with the spindle pulley. As is it will chew up that belt fairly quick.
Click to expand...

What you really need is a nice 5 step pulley, to match the spindle sheaves:

Tom A said:
What you really need is a nice 5 step pulley, to match the spindle sheaves:

Maska, A Quebec company no less! We see their sheaves and bearings retainers everywhere up here.
T

Still Looking for Manufacture info, if anyone has any.
You must log in or register to reply here.

A
Any one recognise this vertical mill?