I read in a thread by Dave E back in 2009 about the possibility of replacing the labyrinth seals for the output shafts on a square dial gearbox with an actual seal. I did not see any photos, or details, so if anyone has either, please reply. Perhaps it is unnecessary; both shafts are quite a bit higher than the oil level in the gearbox, and the bearings being sealed are lubed with grease.

I have a question about the feed shaft. The 49 had a feed release assembly at the gearbox end of the feed shaft; the 67 gearbox did not. It has a stub shaft with a socket to take the feed shaft directly. So either I need to buy a new, longer feed shaf, or if I get lucky, a stub shaft from another gearbox that has the feed release. If anyone reading this has the extra part please contact me.

Here is a photo of the gearbox output parts. The mfg. lathe feed disconnect is on the left, followed by the feed and leadscrew stub shafts from the 67 gearbox. It looks like the feed shaft will need to be about 2" longer. 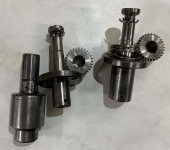 I am no help, except I remember the seals were off the shelf items. I will go and look thru my paperwork and see if anything comes up. I had found coolant had made its way into the gearbox in its prior life and made a massive mess. Although I will never use coolant on my EE, putting some real seals there seemed like the way to go.
D

I have not had a chance to find the part# but I did see my post in DaveE907 gearbox thread, and I stated the single lipped seals (CR brand) fit the shafts and housings without modification.
You must log in or register to reply here.