Picked up a fairly good used Takisawa 14x40 (Yuasa) lathe a couple weeks ago. Thought I’d start this thread to show our progress on the clean up and transition from a unused chunk of dirty iron to a decent working piece of shop equipment.

At first sight it seemed pretty good condition but it’s life sitting in a welding area did take a toll on its cleanliness in the raw state. I drove thru a snowstorm to get first look before the other Craigslist lookers could clear the snow from their driveways. When picking up the machine next day the seller told me he had 10-12 more calls, so it payed off to be the early worm with $1500. 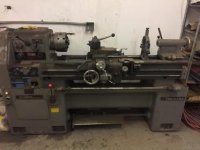 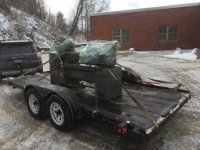 My plans are not so much a pretty paint job (which could happen anyways) but rather a clean housekeeping seal of approval, making sure everything works as advertised and hopefully wear a nice new pretty DRO.

Bed wear doesn’t seem so excessive for its age, but today realized the pump Oiler in the apron was spewing oil from an unknown hole. After some dismantling we found a plug was missing in the casting to prevent oil from going into apron to oil the bed. Sooo, that meant yank the apron apart.
E 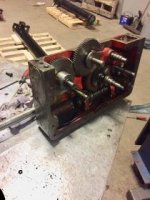 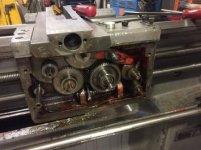 Found 40 years of jungle gunk in the apron reservoir and a few swarf rats behind near the half nuts.
N

You tore right into it!

My oiler isn't working right, either. The apron guts pix are helpful.

Any chance you can make your pictures larger.
Hard to make out any detail.
E

Bare with me, I’m a photobucket dummy. These pics should be better.

Neilho, here’s the image of the front change gear info that shows the 102T gear

All the front levers and knobs had to come off to remove the front apron cover exposing internals and reservoir.
E

Some of the nasties uncovered behind the apron exposing the half nuts.

Thanks for that big photo of the apron internals. That'll be helpful when I tear into mine.

That's the first Yuasa I've seen with gray paint. The other Yuasas seem to be painted 1980's Ford blue. And the bondo under the paint looks to be in good shape too. Maybe someone repainted it? Anyway, you won't have to repaint.

Your gear label is beat up from chuck wrench "storage", too! Another example of unintended design, along with the on/off switch that gets knee bumped. Let's get you something that's at least readable....
E

neilho said:
You tore right into it!

My oiler isn't working right, either. The apron guts pix are helpful.
Click to expand...

Haven’t got to removing the pump oiler to clean and reseal the plunger yet, but I suspect either your problem could be a clogged screen put on the end of the copper tubing used as a suction tube or worn oring on the plunger. It’s not clear In the pic but the tube is in the lower right laying across the bottom.
E

Next up.....
The making of a 102T cast iron change gear that came up missing in action.

neilho said:
Your gear label is beat up from chuck wrench "storage", too! Another example of unintended design, along with the on/off switch that gets knee bumped. Let's get you something that's at least readable....
Click to expand...

Lol......you nailed it. I was wondering how that got beat up, didn’t figure that out. My plan is to make a t-wrench holder bracket like I have on my larger lathe over the headstock gear cover.
S

I called about that one just a tad bit too late. Said you had just picked it up.

Scra99tch said:
I called about that one just a tad bit too late. Said you had just picked it up.

Yup contacted that guy also and it had just sold. It looked like it had sat for awhile before I found out what exactly a Webb was just a re-badged Japanese/Korean one I had been loking for.
N

Webb is just another importer, but on the quality side, like Yuasa. Webb imported Takisawas, too, along with Sharp, before Takisawa started importing their own.
You must log in or register to reply here.