Looking for any information on an anvil I'm looking at buying. It's a 56# trenton anvil serial number A11982. It does have another stamp that says solid wrought in a circle. I'm curious about what year it is if anyone has a anvils in America book that can look it up. Also there is a line that goes through the solid wrought stamp and I have a small concern that it's a crack. From what I have found it could be a fab line from when the base and top portion of the anvil were forged together but just want a second opinion from someone with more knowledge 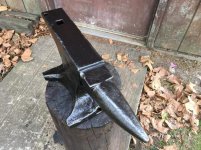 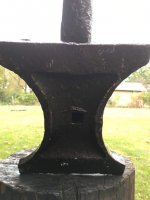 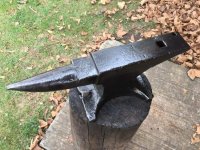 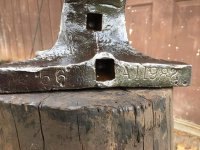 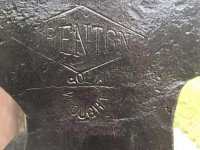 What you think is a crack may be the weld line where the base was welded to the upper part.

That's what I was thinking. But just wanted another opinion. Do u have any idea on a year from it?
S

Many of the patterns of the Fisher & Norris Eagle Works were preserved by an enthusiast. Perhaps he can provide the information you seek.

Trenton anvils are very well respected and sought after. If you strike out here, there are several blacksmith forums online that might be able to get you the information you seek. Also, the knifemaking forums are populated by a lot of anvil owners and enthusiasts.

Just don't tell them you're going to "restore" it. That's when the conversation turns into a shitstorm.
S

Contrary to what it would seem, Trenton anvils were not made in New Jersey as were the Fisher anvils in Trenton N.J. They were made in Columbus Ohio at the Columbus Forge and Iron Company. I had one myself, a very nice anvil- wish I'd have kept it really. The ones made during and after the 30's will have a big visible arc weld at the waist especially under the heel and horn, before that they were forge welded at that point instead.
Dunno about the serial number though.
You could try over at IForgeIron.com, lots of folks over the with a copy of Anvil in America.
R

Thank you for the guidance. I have messaged Fisher and Norris factory museum and they have given me the info I was looking for. It is dated at 1899 and that the line I was seeing is just from the two halfs being forge welded together.
You must log in or register to reply here.

S
What is the purpose for carbide insert anvils?