I've been slowly updating a nearly free to me 1949 or so regal 15, where I'm stuck.....have a new chuck and plate and not seeing how on earth the old plate for the union mfg 3 Jaw comes off

twilkinson3 said:
I've been slowly updating a nearly free to me 1949 or so regal 15, where I'm stuck.....have a new chuck and plate and not seeing how on earth the old plate for the union mfg 3 Jaw comes off

Will work in pics tomorrow but hoping one of you has run across this combo before and has some guidance
Click to expand...

Union is not the only maker who produced "integral back" lathe chucks as well as "flatback".

Are you certain it HAS a separate backplate at all?

One presumes you have it off the lathe's spindle?

Or not-even THAT far?
J

If it is in fact 1949,it will likely have a Lo /long taper style,where you have to undo the slotted ring that holds the taper,and when it come s up tight ,it will push the chuck off..............If its the earlier threaded spindle nose,then you must be very careful not to lock up gears as a method of removal....broken gears will scrap the lathe.

"L" type draw back nuts like so. Super easy to see if you have this big ring behind the chuck with those notches for a hook style spanner. IT LOOSENS UP AND AWAY FROM THE OPERATOR POSITION 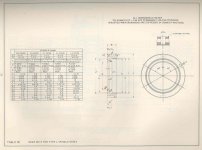 There is no set standard for threaded lathe spindle noses. Each manufacturer did what they felt was a sound design for the lathes they were building. 2 1/4" threaded spindle noses were common between Southbend and Logan and probably a few other makers. LeBlond, for whatever reason, went with the 2 1/8" spindle nose diameter x 5 threads/inch.

As Thermite notes, most lathe chucks are built with a 'plain back'. A "plain back" has no means of mating or connecting the chuck to a spindle. Rather, it is a back having a counterbore or recess machined in it. To mount a plain back chuck, the backing plate is setup on the spindle of the lathe it is to be run on (ideally). The backplate is then machined with what is known as a 'spigot', or raised section that snugly fits into the recess on the back of the chuck body. This holds the chuck concentric with the spindle, and also gives the necessary rigidity rather than relying solely on the mounting screws.

To remove the backing plate from the spindle of a lathe with a threaded spindle nose, it simply unscrews. I am likely off base in using the word "simply", because threaded chuck backplates occasionally are screwed on tightly to the point of being locked onto the spindle. To remove the backplate from the spindle of a Roundhead Regal lathe, put the lathe in its lowest speed. Since there are bolts in the chuck plate, make them up so they are solidly in the chuckplate with shanks projecting out from the mounting face of the chuckplate. Using longer bolts with nuts screwed into the chuck plate and making them up with nuts to further lock them into the chuckplate is what I'd suggest. Take a length of bar stock or a short prybar, something not more than maybe 30" long. Span two of the bolts sticking out of the backing plate and pull down on the bar. The backing plate may "break loose" and unscrew from the spindle nose. If it is stubborn, caution is needed as the gears in the headstocks of the Roundhead Regal lathes are notorious for being on the light side and easily damaged. If the backplate is being stubborn about breaking loose on the spindle nose, take something like a 2 or 3 lb dead blow hammer as a persuader. Pull down on the bar with one hand, holding a good strain on the bar, and give the bar a smack or two with the dead blow hammer. Place the hammer blows about 12" out from the centerline of the spindle and do not get too wild or vindictive with the hammer.

BTW:, the spindle nose thread is a right hand thread, so unscrews counterclockwise when facing the spindle nose. On my own Roundhead Regal lathe, I usually have to use a short lever of some sort, either a short bar thru the chuck jaws or a 15" adjustable wrench on one jaw to break things loose. One good yank (no hammer needed) and the chuck or faceplate breaks loose for me. I keep the spindle threads clean and put a dab of 'Never Seez' on them and the spindle 'register' (unthreaded area and the face of the collar or shoulder) before making up a chuck or faceplate. A little care in cleaning the threads on both the spindle and whatever is going onto it is key.
Two other points: do not run a chuck or faceplate on by spinning it fast so it seats with a slam, nor starting the lathe with the chuck or faceplate not entirely made up hard on the spindle. These Regal lathes are good light duty lathes, but the gears in the headstock have to be babied. Trying to unstick a stuck chuck and getting too rammy can destroy teeth in the headstock, and then it's FUBAR for all practical purposes.
T

As has been said, DON'T put the lathe in back gear, and try to loosen it - That way leads to broken gear teeth.

Here's one way that usually works well for me :

Take the lathe out of gear, with the belts loose, and the spindle turning freely.
Clamp a sturdy solid steel bar crosswise in the chuck, maybe 2' long, or anyway, long enough to hang over the ways by a bit.
Place a block of hard wood over the rear ways, so that the bar will hit it on the back swing.
Bring the bar to the front, and then give it a good hard, fast swing over to the rear, so that it slams into the wood block - Often it will only take just one shot, and the chuck will break loose - No gears involved or harmed.
Good luck.
S

The advice offered above is good. Do not start the process with a cold chuck or plate. Use a rosebud on your torch to evenly warm the chuck until it is very warm to the touch. Be patient.
T

Thanks folks, ya I'm up in Wisconsin in almost Feb and while the garage is heated its not that warm so a little heat is likely in order. The bolts on that back unfortunately do not make it out (too long) bu5 I did take one shot with a pry bar across them in lowest gear....the gearbox turned (I went slow) but the chuck did not come loose

Next up figuring out how to return the back plate leblond sent me I guess, such fun....
T

Looks like threaded tho I went through leblond via serial number and they sent me a l00 plate for the new chuck
Click to expand...

Yes, to "threaded". L series have a hook-spanner-operated draw up ring back there.

Hard Brass hammer rather than lead or Copper dead-blow.

If you have black or red-brown rust in the threads, that can break-down the structure of it, loosen its grip.

Don't over cook that level of effort and damage the expensive parts.

Better to TURN that backplate off.. IF all else fails. Bolt heads can be hacksawed or hackzall'ed off.

The plates are not very expensive.
J

if sufficient spindle sticks out the back,then find/borrow/buy a Parmelee type pipe wrench and use this to remove the chuck.....DO NOT use any other kind of wrench...Parmelee non marking pipe wrench.
T

Got a strap wrench on the back of the spindle with a helper, some pb blaster (could find kroil) and some heat and she's loose

Thanks for the help

Gearbox was in neutral btw
You must log in or register to reply here.