I picked this interesting little compressor up about a year ago but decided, since I have some spare time, that I would check its condition. I can find a small amount of information on the United States Compressor Company of Cleveland, Ohio but nothing on this particular model. I am guessing it is pre-WW2 but I could be way out. 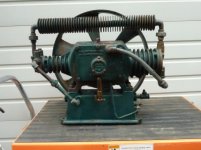 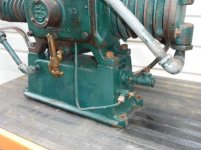 This photo shows the base. The air from the high pressure cylinder enters the base via the sloping pipe on the left. The base is cast as a cavity in one piece which is probably why there is a large pipe fitting on either end, these holes were possibly used to remove the casting sand core. The small T-handled outlet is a bleed valve but the drain line has been bent into an incorrect position. There is no pressure relief valve built into the cast iron base so either the compressor could not produce very high pressure or an external over-pressure relief valve was fitted. Clearly visible is the company logo "US" and its city address, Cleveland, Ohio. There are also the characters "H8" on the casting but whether this was a model number or a casting number I cannot discover. 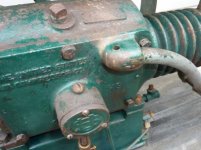 This view shows the company name. There is a serial number stamped into the flat area on top of the casting. The air entry hole is visible and it is obviously very small so it seems it was not intended to handle a very high airflow.

Further points of interest.
The finned compression cylinders are part of the upper casting not bolted in place.
There appears to be some mechanism contained under the circular plate with the company logo in addition to this being a bearing housing.
It remains to be seen what type of crank mechanism was used. My guess is that it a Scottish yoke, a bearing block moving in a slot and running in an oil bath.

There are other threads on these compressors. I have one on it's original tank. There is a tarted up one on Youtube. The compressor was made during the 20's, marketed as an air compressor for a service station.
D

About 40 years ago I had a similar compressor, Keystone was the name, also sold as service station equipment. Crankshaft had an eccentric with a block as you describe, 1 piston with a cutout for the block served both cylinders. If yours is the same, and you decide to disassemble, be very careful, once the crank is out, if piston travels too far towards HP side, the rings will pop out into a groove that is completely inaccessible, and the only way to get piston out at that point is to destroy it. I have not forgotten that lesson

A friend had a compressor with a " United States compressor co" label, but it was just a compressor made of parts from other people? I think it had a GE motor, with someone else's pump, [ don't remember the pump brand but it was a name brand?
R

Link to an old ad: Prosperity and Thrift: The Coolidge Era and the Consumer Economy, 1921-1929
You must log in or register to reply here.