The power supply I have coming in is two legs of a three phase system, two phases 120 degrees apart. This system is unheard of in usa but is what we have in New Zealand on some rural properties (Australia also)

I have all the parts now to build my rpc, im am using four smaller wye wound motors with a staggered start between them.

The wye wound motors will self start with there star points connected to neutral.

Im just wanting to check if the baldoor motor pictured can be wired up to be self starting also with the star points connected to neutral. Some people have commented if the two sets of windings aren't wound exactly the same it could be a problem. 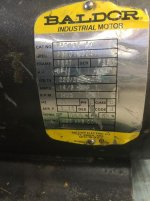 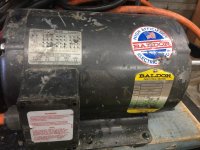 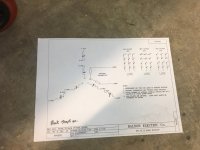 I do not know about all motors- but I trust Baldor.
S

Should be fine but I can look at the nameplate in further detail after work.

The two out of three phase power supply is actually pretty common in the US. Large complexes such as schools may have one three phase service, and then only 2 phases and a neutral run to transformers that then supply the panels in the individual buildings.
B

Thanks for the replys, I probably should have been clearer, is it ok to have both star points connected together and also hooked up to the neutral? to help generate the third phase

I have looked in to transformers instead of a rpc to convert the two phases and neutral I have in to three phase but have found few specific details.
J

It states"
"With two sets of windings, there is always the question of connecting the star points together, and whether there is anything against doing that. The argument against is that the windings are probably not identical, and so the star point voltages may not be the same. That would cause extra current to flow.

You really do not need to connect the two of them together. My reasoning here is that with an idler, the max power requirement is only 1/3 of full shaft power, as it supplies only the power for one of the three lines.

One set of windings will adequately handle the draw for that, and the 3 phase will work at full current because the 3 wires are connected to both windings. So I would connect one wye point to neutral, and let the other one "float". All three line wires connect as usual. (the winding for the unconnected star point will still work just as they would in an RPC with no neutral)"


My interpretation of the above is that the set of windings with the neutral will start the motor spinning without the need for start capacitors or an external "pony" motor. The set of windings without the neutral will generate the 3rd leg in the same way an RPC does in the USA, being fed 240 volt single phase current. If it will self start this way you are all set. If it does not...

MY suggestion, based on a dangerous combination of ignorance and audacity (don't say I did not warn you) is to do the below.
Hook up the motor as the nameplate indicates with both neutrals isolated. Spin it up with a pony motor and put the power to it so it runs as a "USA" type phase converter. After it is running- use a meter to see if there actually IS voltage between the two neutrals. If there is, and you have an ammeter, see how many amps. If no significant volts or amps are found, hook both neutrals together and to the utility neutral, and you have your self starting RPC.
S

Who cares if the windings are slightly different. If they are then one will pull slightly less current than the other. Better in any case than just using one set. IMO, of course.
J

when I did a test with a 3hp 9 wire motor, it would not start on half of its coils, when connected to 208 3 phase. with both sets of coils, it starts up and ran fine. I did not have access to the star point of the second set of coils, as it was a 9 wire motor.

The motor's open circuit voltage across phase C when used as an rpc was 101 volts out of 122 volts, or 16% voltage drop. (this is a pretty typical open circuit value with no capacitors, its just I'm measuring the third phase produced by the third motor coil alone, rather than the phase to phase voltages.

The motor would not start with half of the windings connected to a 3 phase supply. (so i connected all of them to three phase for startup but then disconnected the set of windings of which i didn't have access to the star point for the above 500 watt load)

Nor would the motor start on 2 of its windings connected to 2 phases of 3p supply with neutral connected to the grid. Perhaps it would with both but i didn't bring out the hidden star point.


I will repeat this test with a 5hp 12 wire motor when i have time.


there was no significant extra waste heat produced by connecting the neutral of one set of windings to the grid's neutral, at no load.
Last edited: May 24, 2022
B

Thanks for the replies and input, it has given me some options I hadn't thought of.

I will be starting other conventionally wound wye motors in a staggered start before starting the Baldoor motor shown above. (I am using four smaller wye motors in total in my RPC to give me the needed capacity)

Given that I don't need the neutral connected for starting purposes (as the motor can start of the generated three phase power provided by the other motors) is there any advantage at all in hooking up the star points to neutral?

Some people have mentioned the three phase generated will be more "rigid" if connecting the neutral and that the motor wont have to work as hard to generate the third leg?

With the wye point not connected to neutral, the total voltage is dependent n the voltage (and voltage drops) in all the windings, since the "virtual star point" is established by all working together. The virtual star point" may be different from true neutral.

With the star point connected to neutral, the voltage from neutral to the generated leg is dependent only on the voltage in one phase winding. That is likely to make it a bit more steady.

The motor will never develop full voltage in the generated leg unless it is modified. There are two main reasons:

First, the motor always runs just slow enough that the generated voltage (back EMF) in any leg is enough lower than the applied voltage to allow the required current to flow. That current flows depending on the difference between the back EMF and the applied voltage. As the motor comes under more load, it slows enough to allow even more current to flow, so there is a load-dependent drop in voltage.

Second, since the 3 phase idler is being supplied with single phase, the rotor current is reducing during part of each rotation, because there is less, or no applied voltage (single phase goes to zero twice per cycle). So losses reduce the current in the rotor when the applied current is lower, and the strength of the magnetic field the current creates is also reduced. Lower magnetic field leads to less generated voltage.
B

Thanks for the replies and feedback.

I have all the components to build my RPC using four smaller wye motors, I have a 24v power supply, 24v coil contactors, motor overloads, 8 N/C and N/O push buttons, four idler motors and I have welded a frame to house everything in with the motors flange mounted vertically.

I am however months off getting the two phases out to my shed were I can do some measuring between the two star points. I am wondering I if should try and source another conventionally wound wye motor in the mean time. I would like to use the Baldoor as it has the biggest hp rating out of the idler motors but only if safe to do so.

The baldoor document above shows the motor in a series wye arrangement in the schematic. I will be hooking the motor up in the medium voltage setting shown on the drawing above. Going off the way the coils are labelled I believe the motor will be hooked up in parallel wye in this configuration, happy to be corrected if wrong.

I have attached a couple of pictures to help visualise it, just wondering if any other motors have both there star points connected together commonly?

Hi I have looked trough what I have of Australian documentation, and did not find that 2 phase supply, but I guess you know that better than me. If you have the Neutral, and the 2 phases (witch should give approx 240V between phase and N, and 415V between the 2 phases) you have enough of the Y (star) to get out the third phase from your motor. A flywheel may even stabilize the output.
You must log in or register to reply here.

B
Disadvantage/Problem with using a 1200 RPM, Wye wound imotor for an RPC idler motor

Apr 27, 2021
Dan from Oakland
D
B
Does a RPC help buffer inrush current to the load motor

L
Questions about a 3 Phase motor for an RPC
2