Figured all you Van Norman folks might like to see some pictures of the 2G mill that I recently picked up. Last I could find of anyone writing about them on this site (or any other) was a post by Mike C. in the antique machinery forum in 2004 on the one he has. Still has it as I followed up with him on what info was available. Anyway finally got it off the trailer and into the shop today. It was originally owned by Boeing in Seattle, Wash but at some point made it was here to Portland, Oregon where I purchased it from an automotive Machine shop closing up. Still had had the maintainance records attached to it with the last entry being in the early 70's. Every thing seems to work, I ran it before I bought it. I also ( hard to believe!) got the original manual with it. It was ordered with almost all of the available options--power table feed, bijur one shot oiler, bijur mist coolant system, power feed on the head, work light, etc. Talked to the guy at Repair parts and he had never heard of this model. So here are some picture of a unique Van Norman. 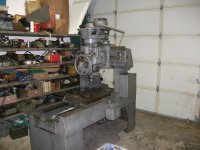 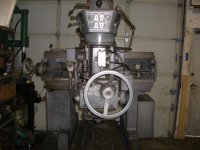 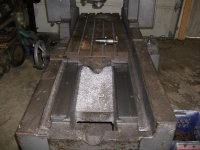 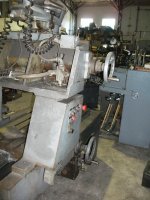 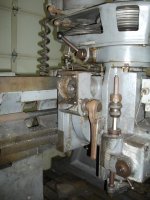 Thanks for the photos! I was never able to see from Mike C's photos how the stand/base on this machine was set up. These give a good look at it.

Purely speculation on my part, I think these machines were sort of transitional before Van Norman committed to their "rotary broach" machines for engine block refacing and decking. The rotary broach machines are a sort of a Bizarro-world planer mill, with the work and cutting head inverted. The engine block is clamped in a fixed position above the moving "table", which mostly shields the large face mill cutter. This configuration probably worked out better in the automotive shop market (more of a dedicated machine, maybe less scary to car shop mechanics?), so VN didn't pursue the more conventional planer mill any further.
Last edited: Jun 3, 2013
S

Seeing how unusual these machines are and that you have a manual, is there any chance you would scan the manual?
C

Very cool machine! I want one!!

It looks a lot like the large jig boring machines from companies like SIP. Does it have the trays on it for holding end-measure rods?

I have an 11x17 scanner and could scan your manual to searchable PDF if you don't have the capability.

The only pics I had of mine were before it was actually hooked up and functioning in the shop. Cal, yes they do resemble the jig bores, but do not have the uber-precision details you mention. They were just a different twist on a smallish milling machine with a major improvement in the rigidity dept. The machine tjs42 has is all there and intact. Mine had been modified, and not necessarily for the better. His has the handwheels in the original locations with micrometer collars so the rail and table can both be positioned just like any other mill. He also has the gear drive powerfeed on the table which looks to use the exact same gearbox as is on my 1R-3-22.

My machine was modified with ballscrews and VFDs driving both the table and also the rail. Very handy for planing operations in either direction, but made it kind of useless as a typical mill since you had no way to locate or move accurately. I had an engraver friend make me up some micrometer dials and rigged needles so I could get some precision with it, but the ballscrews will backfeed loads and move unless you bind down the locks on the axis you aren't using. Mine also didn;t come with the power downfeed. Man, I'd LOVE to have that option and from these pics, it looks like a modified Servo set up on the head. Might have to look into that. His also has the optional tilt head, that goes either 30 or 45 degrees to either side. Mine is the fixed head.

The Bijur air oiler system and cool mist are on the back end of the machine to the left of the operators position. I have a large electrical panel/disconnect on the opposite side of the operator, near the back end. It houses the VFDs and all other electricals except the switches, potentiometers and such for the tabel and rail feeds that is mounted in the same location as the switches on the original. One cool improvement on my machine is a roller way cover setup that works like the old window blinds... spring loaded roll on each end of the machine with the end of the roll of material attached to the table. As the table moves to eitehr end, one side lets out as the other takes up. Pretty danged spiffy.

I'll try to get some pics of it now that we have more than one on board.
M

Finally remembered to get some pics Sunday while I was trapped in the shop due to heavy rains.

First pic is just an overall view, but shows my homegrown micrometer dial on the end of the bed and the windowshade way covers. Second pic is of the back side of the rail, which seems to be a more solid casting than what tjs42 has. Finally, a hanging out over the machine shot of the end of the bed showing the air dryer, Bijur mist system and just out of sight in the lower left, the electro/pneumatic auto oiling system. Top right is the electrical box.