In the process of “restoring” my first Bridgeport. Step pulley 1hp 9x42 table. It included an Enco vise (8in) with swivel base. The vise seems to overwhelm the table with excessive overhang. I’ll be doing mostly small hobbiest type projects. For those that have similar machines is there a “sweet spot” in terms of vise size that is more appropriate? I know this will be very subjective - just curious what others thought. Thanks
A

mwill135 said:
In the process of “restoring” my first Bridgeport. Step pulley 1hp 9x42 table. It included an Enco vise (8in) with swivel base. The vise seems to overwhelm the table with excessive overhang. I’ll be doing mostly small hobbiest type projects. For those that have similar machines is there a “sweet spot” in terms of vise size that is more appropriate? I know this will be very subjective - just curious what others thought. Thanks
Click to expand...

I agree. I think 8” is a big heavy vise. If you need it, you need it. If you don’t, I think a 6” Kurt is a better choice. Most parallels I have are 6”. I think having a tiny grind vise is also helpful. I have a couple Schmidt V04s, I’ve found helpful for small jobs.
M

I’ll hang onto the bigger vise but start looking for a nice 6.
F

Depending on how old you are a 5" is easy to move on and off the mill. For light duty hobby work it might be just fine for your needs.
M

Mid fifties. I’m not kidding myself, even a 5 or 6 is still going to be moved cautiously.
J

I'd guess that 90% of the vises I've seen on 3' to 4' Bridgeport tables have been 6", and most have no swivel base. Most are Kurt or a knock off.
The newer Kurt vices are a bit longer. I appreciate the capacity, but not everyone appreciates the slight increase in weight.

I find a 4" to be a bit small for many things I want to hang on to, but they are definitely easier to move around if that's an issue.

My vise nearly never leaves the table, so it's a non-issue for me. What was an issue was when I used a rotary table regularly. My solution was to put the vise pretty close to one end and the rotary table close to the other. Occasionally I'd need to remove one, but most of the time I could just leave them set up.
C

Basically a low cost version of a hydraulic vice with a screw instead of the hydraulic doobie.

A bit heavier than the usual 4" vice but the extra opening makes them far more versatile.

Probably rare as hens teeth used so you'd need to push the boat out and buy new. Current UK price is around £350, dunno what it is in you neck of the woods. I paid lots less for mine on a show offer maybe 1/4 of a century ago. I reckon they only charged for one instead of two and applied the discount for two but my wallet came out so fast it nearly caught light!

Not perfect, you have to take extra care to beat the job down on the widest setting, but I probably use my bigger Abwood and smaller toolmakers style vices less than 6 times a year for things a Vertex isn't up for. 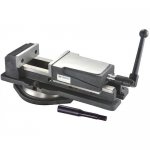 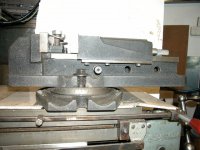 I'd far and away rather have a couple 5" or 6" vises than an 8" on a Bridgeport or similar machine. I have a Kurt 675 and a Taiwan-made "CNC" style 6" vise (flat everywhere so it can be set up on its side or end) - those are a good combo.
S

Why only one vise? I keep three vises bolted to my table. A 6" Kurt gets the most use. Then I have a no name 5" swivel for when it is best to angle the work. Finally a 4" Palmgren that both swivels and articulates up and down. It is rare that I am working with something big enough that I have to either remove or loosen and slide a vise out of the way. It sure is handy to have all three ready for work at all times. The Kurt is the only one I really keep trammed in. The swivel vises are rarely used when exact angle work holding is needed. Usually they are for things where close enough is good enough.
You must log in or register to reply here.

B
Recommendations of rebuilders for a Bridgeport step pulley mill

S
Scrape in old Bridgeport? Sell it and buy new?