eKretz said:
Gotta love these guys that claim to know all this secret crap, can't stand that shit.
Click to expand...

Cast iron welding works WAY better during certain moon phases. I'm not tell you which ones, though. It's a secret.

Cast iron welding works WAY better during certain moon phases. I'm not tell you which ones, though. It's a secret.

That reminds me of something I saw on some blacksmithing show on TV. The guy on the show forged out a knife blade then heated it up and quenched it. The blade warped and he started going on about how he didn't have it aligned directly North/South when he quenched it, and the Earth's magnetic field made that happen. That was when I turned off the TV... SMH.
W

I mean no offence but it is scary the amount of welding advice that gets given out that is dangerously wrong. Sure things may work on a piece or furniture or a frying pan but the weld procedures for critical welded structures are the way they are for a reason. There were things done 60 years ago that people today have no idea about, unfortunately the old timers are being lost to time.

How many people know you can gas well Aluminium?

Pop quiz who knows what a flux pot or gas fluxer is?

I am only 33 but I love history and go the extra mile to educate myself on the history of welding techniques.

If you want to have some fun reading research old documents on how things were done back in the day regarding welding exotics materials. NASA has some interesting case studies.
W

Going away from cast iron for a minute. Regarding welding failures and steel there was an oil rig accident back in 1980 where it sank and killed 123 people. When they did the investigation it all started with cracks emanating from a 6mm fillet weld done at the factory that held on a non structural bracket.

That reminds me of something I saw on some blacksmithing show on TV. The guy on the show forged out a knife blade then heated it up and quenched it. The blade warped and he started going on about how he didn't have it aligned directly North/South when he quenched it, and the Earth's magnetic field made that happen. That was when I turned off the TV... SMH.
Click to expand...

LOL I've actually heard that before on more than one occasion.

It's one of the things I find fun about blacksmithing. Blacksmithing dates back so far and so much of ye oldie blacksmiths education was hands on and informal. Lots of room for speculation and assumptions to be made as to why something happens.

It's cool to hear all the old "rules of thumb" and whatnot that date back hundreds and hundreds of years.

Heck, if I find an old axe head or even something simple like a nail, it's amazing to be able to see individual hammer marks that some guy put there 200 years ago.

Not related to the above, but I was watching a show on archeology and they were able to identify where the blacksmiths shop was in a village and even exactly where he stood at his anvil by the pattern of the forge scale in the earth. I don't remember the details of how old the place was or where, I only remember top down view (computer generated based off of some sort of magnetic mapping? Been a while. Maybe manually mapped out with a metal detector and some graph paper) of the area around the anvil, and you could see a concentration of forge scale right where the anvil was. Heaviest in one spot, then scattering out in one direction.

For me, most of my forge scale ends up on my side of the anvil at my feet. I tend to sweep it towards me when I clean of the anvil.

back in my second (and final) career ,I was maintenance for sandblasters ....anyhoo,they were doing all the pipework for a gas project.....and breaking the 1" instrument branches on very heavy wall pipe fabrications.......anyhoo,boss says "every break costs us $1000 penalty......next to break one of these is fired ....not just him,but the whole group involved".....so next they are bringing me these heavy pipes "to weld the little bits back on".
U

There are different types of cast iron.
Some low grades like an exhaust manifold are very difficult to weld.
Gray or ductile cast welds easily.
Another way that has gotten lost in our quest for high tech is good old fashioned brazing. Brazing is cheap and easy.
A couple of welding, brazing jobs I did.
First one is the bell housing on a tractor. Piece was busted out and missing. I cut the same area out of a junk bell housing and welded it in. Was an interesting little project and the fix has held up well.
Another fix I did was with brazing. Pretty simple. 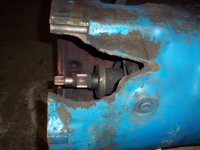 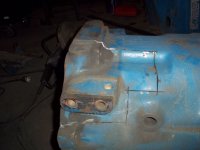 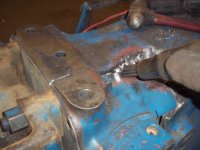 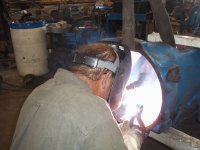 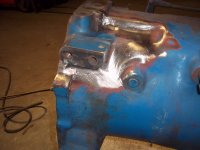 They only let you post 5 photos.
Here are a couple more. 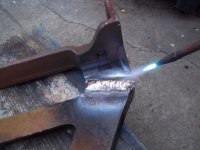 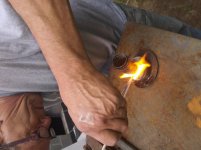 bronze brazing works, even on manifolds. it will not tolerate the temperature, however.
D

since this turned into a welding ci thread, here some info on preheat i stumbled accross. no wonder there is no concensus on procedures and this has to be combined with additional criteria on top of that.

edit: its useless, if anybody knows how to make this larger, let me know.