What psi concrete is the typical warehouse / factory floor?

My 8K boxcar special weighs 13K plus empty. 10K or 12K would be more. As note above several times whether it buckles is more about the subbase than anything else.
G

I had to drive over 4" concrete on packed dirt with a forklift that weighed 65k and a 17k machine on the forks. That concrete broke apart like driving over thin ice.

You guys ever demolished concrete? 4" and under is pretty easy to break up and deal with. Pick up a 2000 lb steel bar on end with an excavator and just drop it from 8 feet. Or pick up the edge of a section, place something under the edge and drive up on it. 6" and thicker is much, much more difficult/involved. Rebar doesn't make much difference, but thickness sure does.

I don't feel as though thicker sections are a waste of money. I always divide my pours up into 11 cu yard increments (usually 22 or 33 yards a day) and will add an inch or two to slab thickness if it makes sense to do so. If a section takes 9 yards why not spend another $240 to add a couple inches and use an entire 11 yard load?
I

I put 6" of 6 bag mix in my shop but I also dug it out 2'. packed pit run for 18" then topped it with road base and ran a packer until I was shaking in my sleep, had water running on it for a week. I have a few cracks but not much actual movement, it also had metal on 24" centers but I have point loaded it many times with outriggers and no cracking. my biggest issue and most damage has been spalling off when torch cutting in the shop. If your loads are normal you need a normal floor. 100,000 lbs on 4 midget forklift tires probably need more, that's where 1" steel road plates come into use. those are available for rent, the few times the weight is up in those numbers.

Garwood said:
I also put 1-3 feet of 3" minus under the slab. Packed it with a diesel vibe roller for an entire day and then let it sit for a year before I finally poured.
Click to expand...

Subgrade does all the REAL work.

All the slab is for is to prevent disturbing it!

See "water bound Macadam" as the mother of all pavements:

Egypt, then Rome were doing it before Macadam was born. Or even Roman-Law England.

All he did was formalize the training for the revival.
A

Damn - there's a lot of great info in this thread. I need to learn a lot more about concrete prior to any shop build/rebuild.
A

Anyone have access to a commercial concrete spec for reference, including finishing? I'd love to know how a Costco floor is spec'd. Every time I go I'm drooling over/on it...

Garwood said:
Wow! That's expensive. It's $120/yard here or if you got enough cash in your piggy bank you can get about 30% off that.
Click to expand...

if you want high spec .you gotta pay extra for fibre reinforced .....In the old days,concrete was like wet dirt and had to be rammed in place .....now its more like soup ,and flows like water......the old rammed concrete is water proof,soup is full of spaces ,and has to be sealed by various coatings.
J

The problem with 4" slab is where it aint 4".....concreters got one thing in mind......finish the job quick as possible.....my slab the concretors pulled every trick in the book.....banned trick ,that is......I was in a big hurry to get the shed up (didnt happen ,due to covid) and had to put up with all kinds of crap from the concretors...like driving over the mesh ,and "hooking" it up......hooking is banned under all the codes and standards here.....It was heavy rain all year (still is) getting six hours fine was touch and go,night before was 4 " of rain which washed sand onto the plastic sheet ....concretors didnt worry about it....I had to hand clear up the pier holes ,as they had already laid the sheet and steel the day before.....pier holes were half full of sand and mud .........I very much doubt there is code 2" of coverage of all steel .....but at my age ,the shed wont be there in 10 years,so why worry?
J

Did I mention ,I had the slab thicker at the door end,but when the shed was installed ,the guy put the doors at the wrong end .....not a giant drama.....but the thickness is wasted,unless I put a door in the other end.....which I may do .
D

Antarctica said:
Anyone have access to a commercial concrete spec for reference, including finishing? I'd love to know how a Costco floor is spec'd. Every time I go I'm drooling over/on it...
Click to expand...

You should probably take this question to the concrete contractors. Come on dude, it's not easy to choose concrete. If you choose it wrong then your floor's gonna be all cakey and unsmooth. Overall, just terrible. You certainly don't what that to be the first thing that is looked upon when people come over right? So just go to the professionals, they know the best. And Idk how many times I've said this but when it comes to building, please don't do it by yourself!

So I know a guy

who built his own shop for something along these lines.

What I built was:

- jumping jack compacted the disturbed soil
- spread 6" layer of #57 limestone (its 3/4" nominal angular stone, washed of all fines)
- lightly wet and plate-compact the stone in 2 directions
- apply 10 mil vapor barrier
- I used Grip Rite Pro-Lok chairs, 1/2" rebar was placed on 16" centers, 2" up from the bottom of the slab
- wire tied every other junction with the looped wire ties you get at a box store
- I used a 4000psi/6-sack concrete mix, poured 6" thick.
- it was pumped into place so the finishers don't have to screw with the mix by watering it excessively
- eventually power troweled and finally steel troweled by the finishers
- I applied BASF MasterKure CC 300 SB curing sealer as soon as I could walk on the surface without damage
- the finishers saw-cut the slab into 10-12' squares the next day after the pour

Imo a boxcar especial forklift doesn't do anything different than a standard forklift as far as loading, the "2x" weight (at the limit) is found at the front tire no matter how the counterbalance is achieved.

So far its held up to everything I've thrown at it, I only have a 7k forklift I've used up to around 10k, some faint hairline cracks at inside corners just from curing stresses, but someone someday is going to have a hell of a time tearing it out

Heaviest machines thus far are the 7k Monarch below, which did come in on skates due to its length (different loading), it replaced a Barber Colman 16-56 hobbing machine which is equally as heavy and was moved with the forklift. 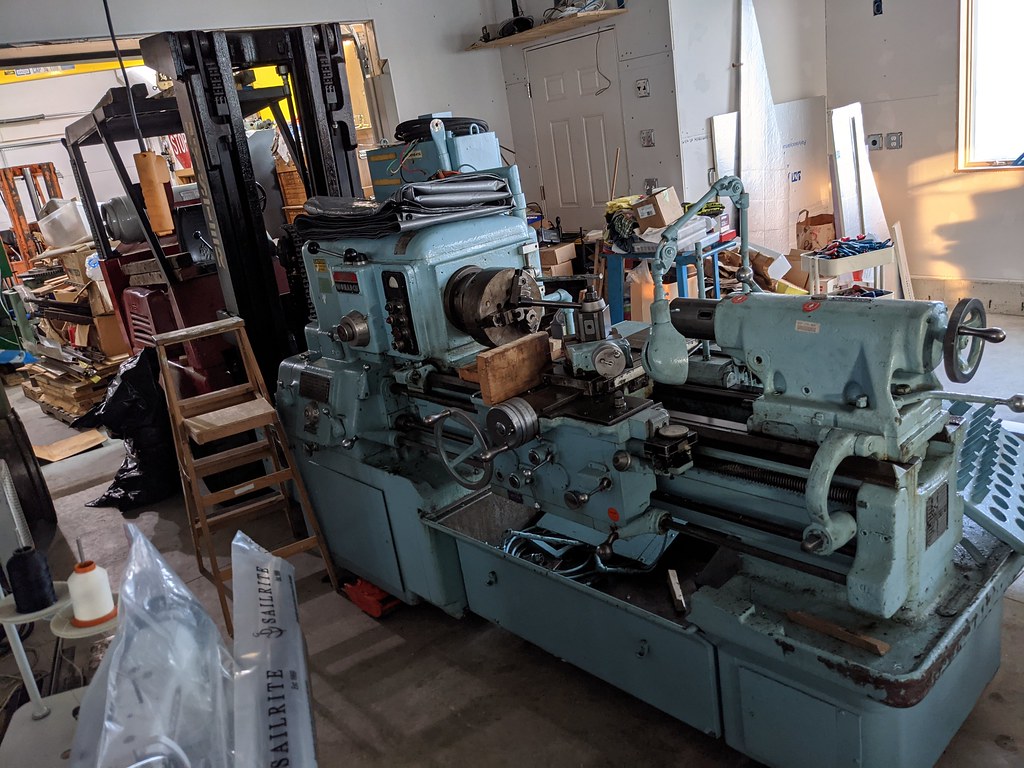 I work in a truck freight warehouse converted to a factory which has thousands of square feet of concrete in ~16'6" saw cuts, the slab has terrible "curl" near the edges which I attribute to it being placed as fast as the crews can go, its 8" thick nominal, less under-prep and the thickness is hugely variable. Easily withstands 30k forklifts used by riggers installing machinery.
Last edited: May 15, 2022
You must log in or register to reply here.

"The Machine Shed" - Building a Line Drive Shop from Scratch
2