I know it's a long shot as there were not many of these lathes made, but I figure it never hurts to ask. 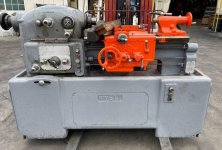 There was no extra charge for the fancy porch paint job!

It has the taper attachment but is missing the bed clamp. Odds are I'll end up making one, but an original would be preferred. Or maybe an original that could be borrowed and sent to a foundry to be copied.

I'd also like to find a steady rest and a follower rest.

I have a drawtube. I'm not sure, but it almost looks like it's parts from the lever closer. Looks like it'll work but if you have a factory lever closer or parts for one I'd be interested. Here's what the end of my drawtube looks like: 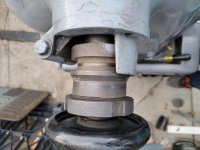 If you have any other accessories like 6r collets, micrometer stops, factory cabinets, etc just lying around, shoot me a Pm. =)

The lathe came pretty complete and original for the most part. There's a cover on the rear of the carriage that is hinged and covers the screw back to the taper attachment. I'm missing that piece. I'd love an original, but assuming I won't find an original, I might be able to duplicate it if I had drawings or good photo's with measurments.

The part that the stop hits on the bottom of the apron appears broken and if you're parting out one of these lathes I'd be interested in an original. It looks like an easy part to make though.
. 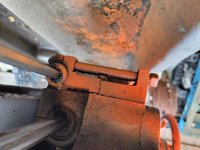 .
.
I noticed later models had oval ball knobs attached to the knob you use for changing from open belt to back gear.

In the short time playing with this lathe I can see why they did this. With a little oil it gets slippery. I probably get the oval knobs at McMaster but if you have one, could you let me know the dimensions and thread size. Thanks!

P.M. sent.
You must log in or register to reply here.