Sneaking a wartime girlfriend back to the USA aboard a US military plane does not sound so far fetched. Crews stuck together, and with a bit of horse-trading or similar, the lady could well have been smuggled off the aircraft when it landed in the USA and smuggled off base.

As I wrote in earlier posts, my own father spoke excellent German. Dad told me he never had problems with what he called 'regular Germans'- farmers, mechanics, shopkeepers and similar. Where Dad did run into problems was with local officials and German officers. He said these types were arrogant, and acted as though they still had the upper hand and were "Ubermenschen" (superior beings). Nazis, not about to change. Dad's name, at the time, was Michanovsky. He anglicized it to Michaels at some point during his service in the US Army in WWII. Dad had picked up German quite easily, since Yiddish ( a kind of German-based dialect) was his first language, though he was born in the USA. Dad told me he'd get enough guff from these arrogant nazis or simply arrogant Germans who had a rank or authority. He'd give them the same speech: "Every drop of gasoline, every bullet, every tank, truck, bomb, and plane was built in the USA by women and people unfit for military service. Our army is made up of everyone you consider 'untermenschen' (lesser beings). We came here on ships manned by many ex prisoners, ships built by women and more untermenschen... and we are victorious. My name is Michanovsky.... if you have anything else to say, we'll step outside..." Dad would deliver this little lecture in good Hochdeutsch and the whole demeanor of things would change. Dad said the guys getting the lecture were often sullen, but they kept in line after that.

Years later, my wife and I were on a vacation to Amsterdam and Prague. We were taking a night train from Amsterdam to Prague, and were at the main station in Amsterdam. We had gotten used to the happy, easy going Dutch. Having visited the Anne Frank house that very day, we found ourselves wondering what that old station had seen: occupying Wehrmacht and SS arriving, and Jews being deported from it all ran through our minds. Our train pulled in and had many cars. It was a train run by the German railroads, and these German conductors got out on the platform. Spotless uniforms, and all of them seemed over 6 feet tall. They began barking in German. We had no idea what sleeping car we were to be in, and the platform was crowded, bustling, and the conductors were barking away in rapid German. My wife asked me how we'd find out what car we were to be travelling in. I remembered what I had learned from my father. I told her: " I'll handle this..." I walked up to one of those 6 foot conductors (I am 5'-9") and in a firm and somewhat steely loud voice said: "Sind Sie Schaffner ? Im welchem Schlafwagen sind wir nach Prague abgefahren ?" (Are you a conductor ? In which sleeping car are we to depart for Prague ?). The conductor suddenly changed his demeanor. "Jawohl, mein Herr... Im schlafwagen nummer 452, vorwarts im diesem Zug." (Yes, Sir... in sleeping car number 452, forward in this train). I thanked the conductor and we found our sleeper. I had learned my German from a smattering of Yiddish when I was a kid, then working with German immigrants in the machine shops and the old Rheingold Brewery. In the process, I learned that some Germans love uniforms, titles and authority along with having things absolutely orderly and punctual. I also learned that if you meet one of these types and stand up to them with some authority of your own, they will respond as though you did, in fact, have some real authority. I told the wife, the image of confronting a 'bad dog' had come to mind when the conductors were out on the platform strutting and barking. When confronting a bad dog, I tend not to back down, but to stand my ground and use that same steely tone of voice. Often, the dog will just back down and wander off. Wife was impressed. I said a German railroad conductor in a uniform was there to serve us, and even if he seemed to be barking away and strutting, I knew how to handle him- same as a bad dog.

Crews sticking together is the stuff of legends. In my own experience, I have plenty of tales of this sort of thing. Two memorable incidents happened with my old crew at the powerplant. We had a chief mechanic who was a functional alcoholic. A real racketeer who had learned the mechanic's trade in the US Army in the 50's. He had joined the Army at the behest of the local police department and a judge, who offered him that as an alternative to some felony time in the state pen. This old chief mechanic and I were thick as thieves, and our crew was looked upon as a pack of outlaws. We got a LOT of work done, set records, broke rules, disregarded corporate policy more often than not, and did some great jobs together. In one incident, the chief mechanic took the powerplant resident manager's car for a 'test drive' following routine service at the powerplant fleet garage. Driving off project, he turned into a local bar. Unfortunately, another mechanic from another crew was in the bar on his day off work. This other mechanic was a mean individual and decided it would be great sport to get our chief mechanic completely drunk such that he might get him fired. This other guy failed to recognize that our chief had quite a capacity for alcohol. He also failed to realize that our crew stuck together and took care of each other. After spending considerable money and time, the other guy left the bar. Our chief was pretty well intoxicated. About that time, the mechanics assigned to the garage got a call from the resident manager's secretary requesting the car be brought down to the powerhouse so the RM could go home. My guys scrambled (I was up at a remote powerplant site at the time). Three of my crew got into a truck and went to the bar. The chief was still standing, somewhat argumentative about giving up the keys to the car, but he did. One mechanic drove the RM's car to its assigned parking spot for the RM, the other two got the chief back to the garage. They took the chief and bundled him into the back of one of the line crew's trucks (the kind of closed-body truck often used to carry tools or take the discharge from wood chippers). They then covered the chief with a blanket or maybe a coat, and backed the truck so it was hard against a wall inside the fleet garage. They told the chief to sleep it off and not make a sound or move out of the truck. After quitting time (this was in the days before we 'badged' in or out at the gates), one mechanic drove the chief's car and the other two drove the line truck to his house. They unloaded the chief and walked him to his front door, turning him over to his wife.

In another incident, we had an old highway type of snowplow truck to maintain the roads on the powerplant reservation in winter. Whoever piped up the hydraulics was nuts, as they had the valves for the main and wing plow blades working so that pulling back on the levers dropped the blades. About 99% of equipment has things so pulling back on levers raises blades and buckets. Two of our crew were out one snowy night plowing around the fleet garage. The wingman was used to normal equipment, and as they approached a dump truck parked along the building, he pulled back on the levers intending to raise the wing and swing it in. Opposite happened and the wing tore the fiberglass fender and hood of the dump truck. I came in the next morning and the crew were unusually quiet. I soon learned what had happened. By policy, I should have reported the incident and likely some discipline to the men would have been dictated by higher-ups. Instead, I told them to run the dump truck into the fleet garage, call it out of service for something else, and told them to order supplies and parts from the dealers and vendors we had accounts with. The old chief knew how to get the parts men at the dealers and vendors to supply what we needed, but bill it off as something else like filters or gaskets or engine parts. One of our guys was good with fiberglass and body work and he was set to work on the repair. We kept that truck parked in an odd corner of the fleet garage, and the line crew, whose truck it was, kept mum about the accident. We all stuck together. In a few days, the dump truck was looking good as before, painted and no sign of the damage.

Things were a lot looser back in those times. We did not have computer software tracking every move with work orders and time charged to them, and we did not have badges and 'readers' at the gates to monitor our comings and goings. Fleet vehicles did not have GPS. All sorts of things used to happen at the powerplant, right under management's noses. I think any crew that gets along and bonds is going to pull stunts of one sort or another. Getting one-up on management is part of the game. That old chief mechanic was known as "the Silver Fox"- he had a full head of silver hair and was as cunning as a fox, so the men tagged him with that handle. Years later, I stood up in church and gave his eulogy, my last duty to an old friend who had always had my back and the crew's backs.
J

I noticed this advertisement about a WW2 Harbor Tug that I found interesting . 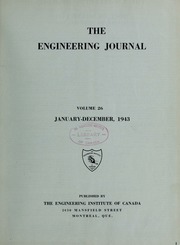 Some issues in vol. 51, 1968, include Transactions of the Engineering Institute of Canada
archive.org
Jim

H
I rescued a very old SIPP drill press from a closed down paper mill....

OT: Property Damage question... How long should it take to get information or even a police report.
2