In Donald, Ore., 24 miles south of Portland, GK Machine Company Inc., is manufacturing parts for heavy agricultural equipment such as harvesters, sprayers, tree diggers, and hose reels. The company also produces pre-made greenhouses, nursery supplies, and farming tools. If there’s one thing GK Machine knows, it’s “growing.” Started in 1976, like so many other machine shops back then, as “two guys working out of a garage,” today, GK Machine occupies a 175,000 ft2 (16,258 m2) facility, its third building expansion since 2015.

In addition to its manufacturing space, GK Machine has a multi-million dollar storage operation that it manages with a technology-driven inventory system. The company has nearly 200 employees and serves industries beyond agriculture, including industrial food harvesting, transportation, and the military. It also provides custom manufacturing services.

“We make manifolds, pivot pins, brackets, blade locks, spindles, race car parts—pretty much anything we can put in our machines,” said James Houdyshell, production manager for GK Machine. “We do everything from single parts to assemblies made up of 20,000 parts. On the shop floor, we can have many different jobs going on at any given time.”

With an operation this robust, having a manufacturing environment that is reliable and efficient is critical. GK Machine has an impressive list of milling machines, lathes, and mill-turn centers, including one mill-turn center with simultaneous five-axis machining capability, two four-axis mill-turn lathes, one four-axis horizontal machining centers, three vertical machining centers, one two-axis turning center, and a manual lathe and mill. To program so many diverse machines, GK Machine needed a powerful CAD/CAM software package. It eventually decided to invest in Mastercam CAD/CAM software, developed by CNC Software Inc., Tolland, Conn., due to its ease of use, numerous capabilities, and local tech support. 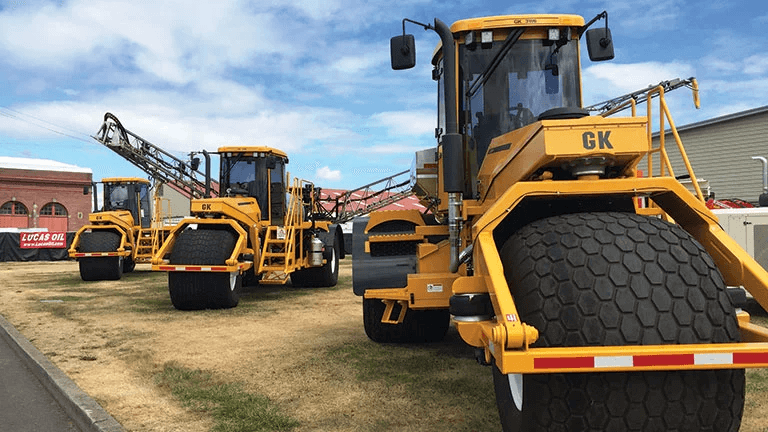 The GK 3W6 Sprayer was featured at the Oregon State Fair. It has been updated with a more fuel-efficient engine and 200 percent stronger frame.

The sheer number of machines and parts moving through them requires as much streamlining as possible. Recently, GK Machine added a single-code stream machine environment to its turning center and purchased a seat of Mastercam Mill-Turn to manufacture parts for harvesters and hose reels.

“The ease of importing tools and having an accurate representation during simulation has been very helpful with our four-axis mill manifold programs,” said Garik Schmidt, machine shop supervisor. “With a template in place, we can now take an STL file and import it into Mastercam.” The template includes tombstone and workholding solid models that mimic their counterparts on the actual machines. Once the part model is imported, it is placed onto the tombstone. Said Schmidt, “We’ll run our simulation, make sure we have all of our clearances, export the program out to the machine, and run our first workpiece.”

Mastercam’s Tool Library allows GK Machine to set up databases, or libraries, with custom form tools, drills, appropriate cutting parameters, and workholding devices specific to the manifold applications. “All we need to do is select the material, then just ‘drag and drop’ our toolpaths for where our points are, and we have a good program,” he said. “We merge the library with our current file so that it will all be in the machine environment.”

And the drills on the mill run fast. “On the horizontal mill, we can run the drills at close to 140″ [355.6 cm] a minute to cut aluminum and ductile iron,” said Schmidt. “We are running standard traditional drill toolpaths for all manifolds.”

GK Machine also manufactures blade locks for wind turbines, another scenario where the company has successfully reduced machining time by optimizing the features of the software, tooling, and machines. It starts by programming Dynamic Milling toolpaths, which incorporate Dynamic Motion technology. These are toolpathing strategies that employ proprietary algorithms programmed into the software to keep the tool constantly engaged with the material, allowing it to cut intricate geometries at higher speeds. 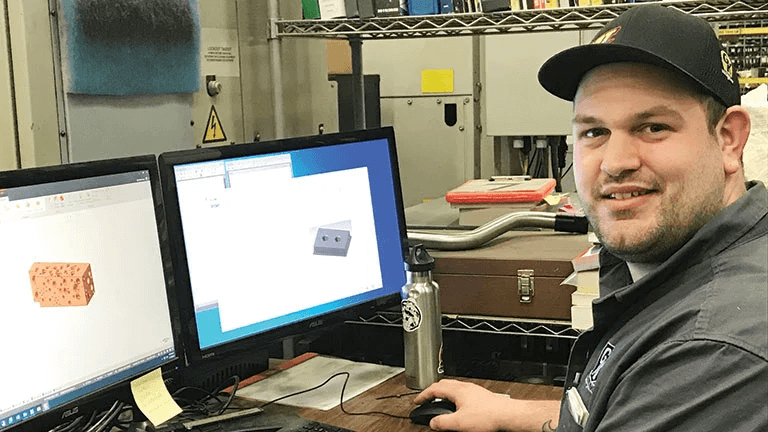 Both Mastercam Lathe and Mastercam Mill-Turn feature CAM turning strategies to support Sandvik Coromant’s PrimeTurn methodology. Sandvik Coromant’s CoroTurn Prime B-type inserts are used by GK Machine to rough 8620 cold rolled steel while Prime A-type inserts are for finishing. High material removal rates are possible because turning can be performed in all directions. PrimeTurn can be added to the Mastercam interface with a full library of 3D tools available to drop into the toolpaths as needed.

“Initially, machining blade locks was a slow process,” said Houdyshell. “We had a pin we were turning down, roughing out a good amount of 8620 cold rolled steel, and run time was about four hours. Now, using the PrimeTurning toolpath with a Sandvik Coromant roughing-turning tool and finishing-turning tool, we’ve cut that time down to one hour. And we’ve extended tool life.”

This streamlined approach has allowed the shop to deliver pivot pins for harvesters and agricultural tractors in a fraction of the time it took prior to installing the larger mill-turn lathe. Previously, it took three machines to complete the process.

“We’d prep the piece in the manual lathe, then put it into our two-axis lathe to turn, then load it into the horizontal to do the milling and drill work on either end. Start-to-finish, the process took about four hours,” said Houdyshell. Now, GK Machine performs a quick prep in the two-axis lathe and loads the material into the mill-turn machine, and supports it with tail stock and finish machining. The shop removes 148 lb (67.13 kg) of material in around 20 minutes. “We start with stock measuring 9.5″ [241.3 mm] in diameter at 25″ [635 mm] length,” he said. “We then bring the diameter down to just under 8″ [203.2 mm]. We turn that 8″ diameter 23.25″ [590.55 mm] down the length of the part. 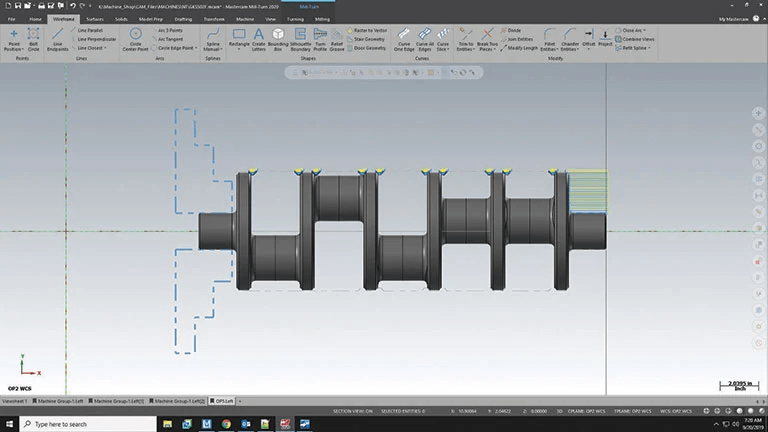 Getting up and running with CAD/CAM software was easy, according to Schmidt. “For our larger mill-turn, the post available was almost perfect. There were a couple of G- and M- codes that weren’t lining up with where they were supposed to be at first. And there were a couple machines not reading it, so we needed some very minor adjustments,” Schmidt said.

He credits Mastercam reseller MCAM Northwest Inc. Oregon City, Ore., with helping to get Mastercam Mill-Turn working at GK Machine and with helping set up the two-code stream machine environment. This, combined with the Mastercam network license, allows programmers to work from any computer equipped with a license in the shop. “When we initially got our Mill-Turn license, some tweaks needed to be made to the machine post file,” said Schmidt. “We sent a zipped file within Mastercam to them and they were able to fix those issues and get the files back to me in a short period of time so we could get back up and running.

“For us, there’s another benefit to having Mastercam—it’s easier to find people who are trained in this software,” he continued. “If we need to bring in someone to help with programming, there’s a good chance they’ll be familiar with it, so getting them in and up to speed isn’t a problem.” Schmidt himself took classes to learn the software at nearby Clackamas Community College. 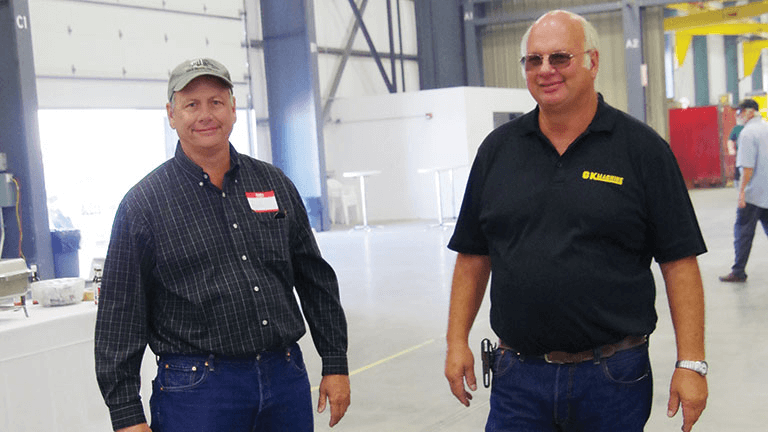 For recruiting programmers and machinists, GK Machine has relationships with several Portland-area school districts, including Woodburn, St. Paul, and Salem-Kaiser, and two nearby community colleges (Chemeketa Community College and Clackamas Community College). It also works with the local Future Farmers of America chapters and the Williamette Valley Promise Program, which helps promote internships for high schoolers interested in machining, fabrication, and mechanical careers. In fact, the company had four engineering interns over this past summer and hired one, Daniel Schurter from Oregon State University

GK Machine stays connected with local high schools, middle schools, and grade schools, conducting tours of its facility. “We really open their eyes to the technology, the programming, and some of the fascinating things we do,” said Houdyshell. “It’s fun for our guys when the kids come in because they get to really show off and see the kids’ faces light up.”

The company is committed to investing in its people, technology, customers, and community in order to grow its diverse book of business and share its expertise to help continue the success of agricultural and manufacturing firms in Oregon.