Cutting Superalloy Challenges Down to Size

Cutting Superalloy Challenges Down to Size

How people feel about heat-resistant superalloys depends on what they do with them. Those who use parts made of HRSAs—which include nickel-, iron- and cobalt-based alloys—are high on the materials because they retain their strength and hardness at high temperatures and also provide excellent corrosion resistance. HRSAs like Inconel and Hastalloy are popular choices for aircraft engines, gas turbines, joint implants and other products that must be designed for demanding duty.

In machine shops, however, HRSAs are not so popular because of the cutting difficulties posed by the materials. But there are ways and means of effectively meeting these challenges, including recently introduced offerings that can make the prospect of machining HRSAs somewhat less daunting. 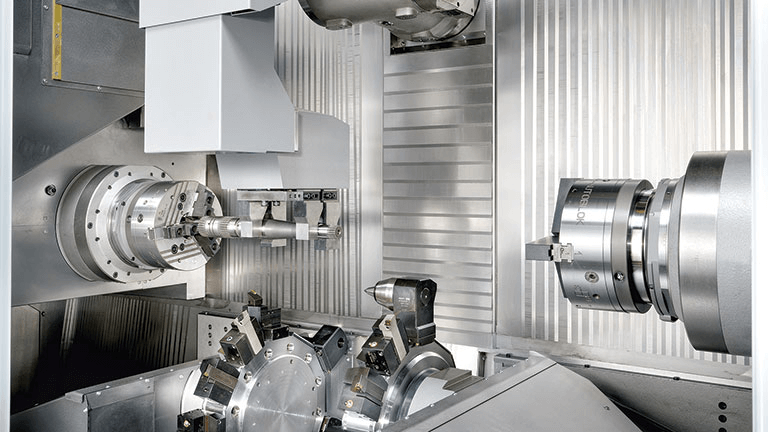 A successful approach to cutting HRSAs begins with understanding how the process will differ from machining conventional materials. “It’s not like machining steel or cast iron, where you’re looking at how many parts per edge you can run,” noted Scott Lewis, aerospace industry specialist at Sandvik Coromant, Fair Lawn, N.J. “With these materials, it’s how many minutes of cut time do you have or how many insert edges will it take to complete this cut.”

One reason HRSAs are hard on tools is that their heat resistance tends to put extra heat into the tool during machining, Lewis explained. So it’s crucial to use an insert material and coating that will hold up better when exposed to the additional heat.

In addition to tools that will last as long as possible, operators machining HRSAs want consistent or repeatable tool life. So if they have to make a tool change in the middle of an operation—which is often necessary when cutting HRSAs—they’ll know exactly where in the process the change will be required. 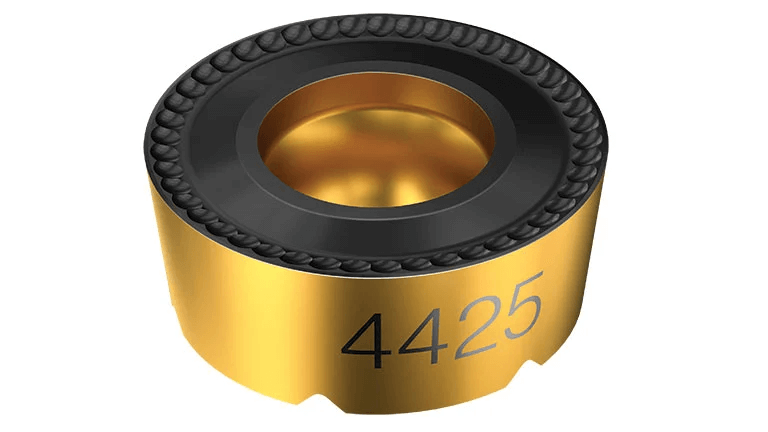 The design of the CoroTurn 107 holds the insert in place when subjected to high machining forces.

Operators “don’t want to be running with their finger on the button all the time waiting to stop the machine,” Lewis said. “They want to be able to run with some consistency and confidence.”

In many cases, he added, operators can complete an entire pass with an insert grade and geometry recommended by Sandvik Coromant, which employs testing and development methods that allow the company to accurately predict how long an insert will last when cutting a particular HRSA.

Besides improving cutting consistency, the right insert geometry, or chip breaker, can give a boost to tool life. “If the chip is hitting and rubbing the cutting edge, that can cause the insert to break down faster,” Lewis explained. “So if you can direct the chip away using the right chip breaker for your application, it will extend the life of your insert edge.” Sandvik Coromant has chip breakers designed for roughing, intermediate and finish machining of HRSAs.

In addition to their inserts, shops cutting HRSAs must make sure their machines are up to the job. Though it’s not good practice to put a part in a machine tool that’s larger than what the machine is designed for, “with steel, aluminum and brass you can get away with it. But with Inconel, that’s a no-no,” said Mark Page, senior applications engineer at Index Corp., Noblesville, Ind. With Inconel and other HRSAs, in fact, “you’re better off having a machine that’s overpowered for what you need.” Machine tool makers offer online calculators that allow users to determine the horsepower and torque required for their applications.

According to Page, machines with high horsepower and torque capabilities also tend to be rigid, which is another important characteristic for machines that cut HRSAs. For increased rigidity, Index offers a patented system called W-serration for machine turrets and toolholders. When a toolholder is inserted in a turret, W shapes cut into the base of the toolholder engage with corresponding shapes cut into the turret, making for a secure, rigid connection.

Page’s HRSA experience has been primarily with Inconel 718, which offers heat resistance that makes it a good fit for aerospace applications. On the downside, however, the heat resistance of this material causes more heat to build up in the tool during machining. So Page found that Inconel needs to be machined slowly (at around 120 sfm) with carbide tools. “If you machine at a higher speed, you’ll destroy the tool very quickly,” he said.

Since heat is a major concern, coolant also becomes particularly important when cutting HRSAs. In these situations, “the more coolant, the better,” said Page. Specifically, he recommends applying plenty of high-pressure or flood coolant to cutting edges during HRSA machining to reduce heat and extend insert life. 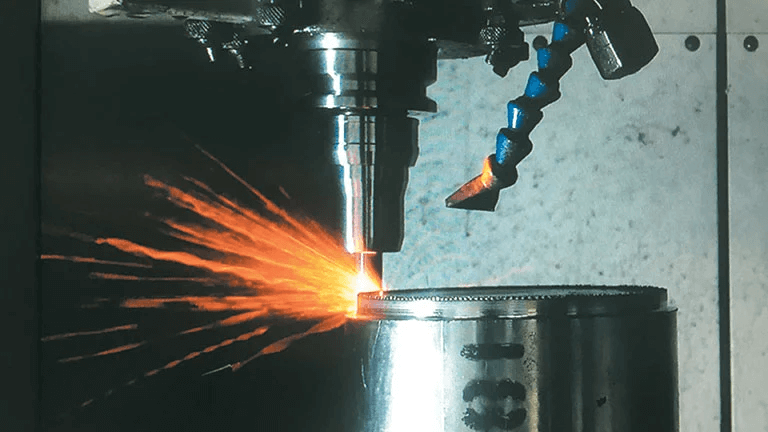 According to Lewis, most Sandvik Coromant tools are designed for delivery not only of high-pressure coolant but of what the company calls high-precision coolant, or coolant directed at critical locations on tool or insert edges. Besides cooling down cutting edges, high-pressure/high-precision coolant washes away potentially troublesome chips. In addition, many modern tools benefit from this type of coolant being delivered as both over coolant and under coolant, rather than just over coolant, he noted.

Recently, Sandvik Coromant introduced a round insert system for HRSAs featuring high-precision, coolant-through technology. Called CoroTurn 107, it’s also designed to prevent micro-movement or rotation of the insert when cutting forces are high. A shim in the holder engages with a groove in the bottom of the insert to lock the insert in place, Lewis explained. He added that some CoroTurn 107 inserts come with CBN around the periphery for increased productivity when cutting HRSAs.

Ceramics are another effective material option for cutting HRSAs. Ceramic inserts can cut Inconel 718 five to six times faster than their carbide counterparts, according to Page, who added that they are widely used in the aerospace industry for mass material removal.

A number of companies now offer ceramic end mills for cutting HRSAs. One of these is OSG USA Inc., Irving, Texas. The time difference between cutting projects done with carbide and ceramic end mills can be dramatic, according to Jeff Stephens, applications engineering manager at the company. “Roughing out an Inconel part with carbide may take hours, depending on the strategy, whereas roughing out with ceramic tools may take minutes,” he said.

Ceramic tools require machines with spindles capable of running up to 30,000 rpm in some cases, Stephens said. They also require a “super-rigid” setup, more so than for carbide tools, he added, including a high-quality rigid toolholder.

Rigidity is important because vibration will destroy an insert made of ceramic, which is very brittle, Page said. So in addition to employing a rigid toolholder, users must make sure the workpiece is securely clamped, particularly for roughing operations. Finishing is a different matter, he noted, because tool pressure is lower than it is during roughing.

Users of ceramic cutting tools should also be aware of their potential long-term impact on machines. As ceramic inserts degrade, swarf is produced that can get inside a machine and eventually cause cutting problems, according to Wade Anderson, product specialist sales manager at Okuma America Corp., Charlotte, N.C. 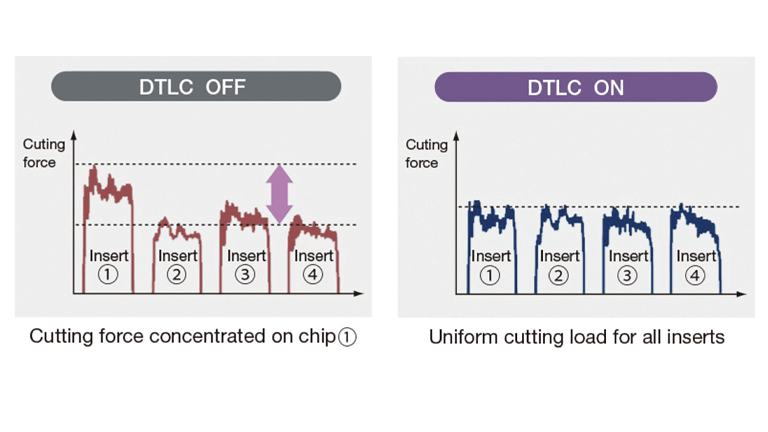 “It can be real neat to have a very fast-cutting piece of ceramic. But if after five years that ceramic is doing harm to the machine tool, that can actually cost you in the long run,” Anderson said.

However, he also stressed that different machines will be affected differently. Lower-quality machines and those that don’t have adequate protection “can get chewed up by abrasive swarf,” he said.

On the other hand, that fate can be avoided if a machine is well protected and/or designed with the dangers of swarf in mind. For example, Anderson noted that Okuma machines are laid out so that X and Z axes are overhead, which means swarf can’t drop on them. That leaves only the Y axis for users to worry about. Those who are unsure about how to safeguard their machines from swarf can call in third-party companies that will assess their machine and process and offer appropriate protection methods.

In addition to machine designs that minimize the danger posed by ceramic cutting tools, Okuma offers an optional feature that can be especially helpful to shops that machine HRSAs. Called Dynamic Tool Load Control (DTLC), the technology includes a gage that measures tool runout during cutting. This information goes into an algorithm that dynamically adjusts the feed in accordance with the runout data so the loads on individual inserts are the same as machining proceeds. Evening out insert loads can result in anywhere from two to five times longer tool life, according to Anderson.

DTLC can also prevent unpredicted tool failure that causes both machine downtime and part damage. “The worst-case scenario is scrapping a part that has a lot of time, labor and money put into it because a cutting tool went bad prematurely,” Anderson said. This result, he added, is particularly costly for shops making expensive HRSA parts.

HRSAs like Inconel and Hastalloy become very gummy while a tool is cutting them. If a shop uses an end mill to cut Inconel, the gummy metal will eventually fuse with the cutting edge, noted Kanon Shiu, product and service engineer at Chevalier Machinery Inc., Santa Fe Springs, Calif.

When this happens, “you have to stop your machine and replace your end mill,” Shiu said. “If you are doing that on every pass, it makes the process very long and tedious.”

As a result, Shiu said, more people are embracing grinding as an alternative to milling HRSAs. When HRSA material fuses with the abrasive materials in a grinding wheel, closing up its pores and making it smooth, that material can be removed in a dressing process. During the grinding of an HRSA part, an overhead tool is constantly dressing the wheel so parts can be machined without frequent stops to change out cutting tools.

According to Johnson Lan, vice president of sales at Chevalier, another downside of cutting HRSAs in the conventional manner is that it leaves a burr on the workpiece that must be removed in a secondary machining operation. By contrast, he said, a grinding wheel with a very fine abrasive creates no such burr on HRSA workpieces. 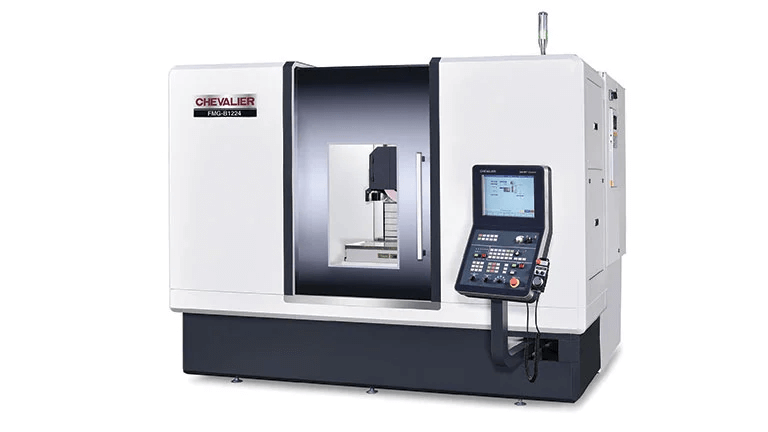 The new FMG-B1224 offers the horsepower and rigidity needed for creep-feed grinding.

Shiu added, however, that more horsepower is needed for creep-feed grinding because heavier cuts are being taken. With a 40-hp spindle, Chevalier’s new FMG-B1224 has what it takes to make bigger cuts, he said.

In addition, Shiu pointed out that creep-feed grinding requires a more rigid machine, so the FMG-B1224 design adds rigidity with several new features. One of these is a different casting. The table on a typical grinder hangs off at the end when it travels all the way in one direction or the other because the casting only supports the middle of the machine, Shiu explained. But the casting of the FMG-B1224 supports the table at all times because it extends far enough to support the full travel of the machine.

Whether you opt for grinding or milling, good choices can cut a good deal of the difficulty out of machining some of the world’s most challenging materials.