When Moeller Precision Tool, Wixom, Mich., decided to invest in a high-end five-axis mill, it became clear that software from Tebis America Inc., Troy, Mich., was to be an important part of the process, from selecting the machine to programming it.

“From the front office to the machine operators on the plant floor, our organization is committed to precision and product quality, and to employing the best available technology to get there,” said Engineering Manager Jamie Hachigian. 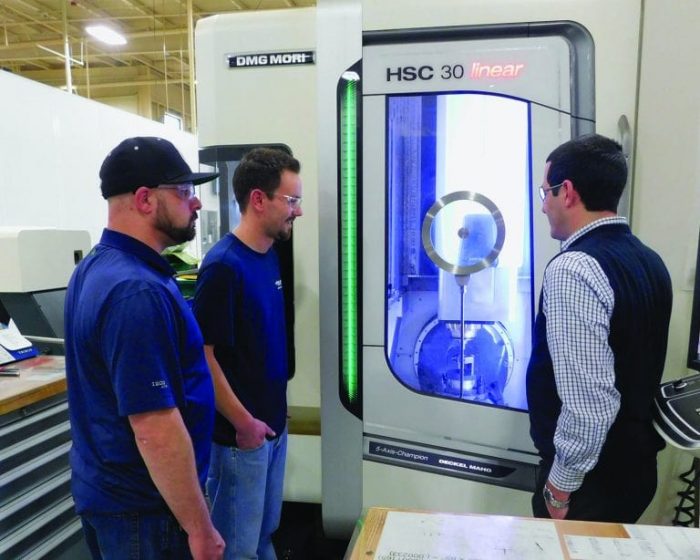 Formerly, Moeller had used two different grinding operations to create this small precision part. There were the expected issues resulting from heat generation and grinding wheel dressing. The scrap rate was relatively high and, importantly, grinding operations were time-consuming.

“Speed was key. With today’s customers, speed is a competitive weapon, and the customer base for this part was no exception—they demanded more speed,” Hachigian said.

After investigating various options, Moeller decided to take a closer look at the five-axis offerings from DMG Mori, Hoffman Estates, Ill., specifically its DMG Mori HSC-30. It is a high-powered machine with spindle speeds up to 40,000 rpm and rapid traverse rates up to 3,543 ipm (90 m/min). “We had been looking at high-end milling for a long time. One of the things that attracted us to the HSC-30 was the DMG Mori control. That was a big feature for us, and we knew that Tebis had experience with their controls,” Hachigian said.

“Moeller went through a detailed evaluation process with the HSC-30,” said Michael Thiessen, sales manager for Tebis America. “They knew that high-end milling had the potential to give them similar tolerances to what they had been obtaining with grinding, yet do it faster.

“We have a good relationship with DMG Mori,” Thiessen continued. “We are very familiar with each other’s products, so we were asked to be present in late 2016 for ‘the showdown,’ the crucial series of tests on the actual die punches. Success for these first cold runs was pegged at being within 80 percent tolerance, with every part CMMed to verify the results. DMG Mori was running Tebis software and right out of the box the parts were very close to tolerance, without any tweaking. Part surfaces were excellent,” he said. 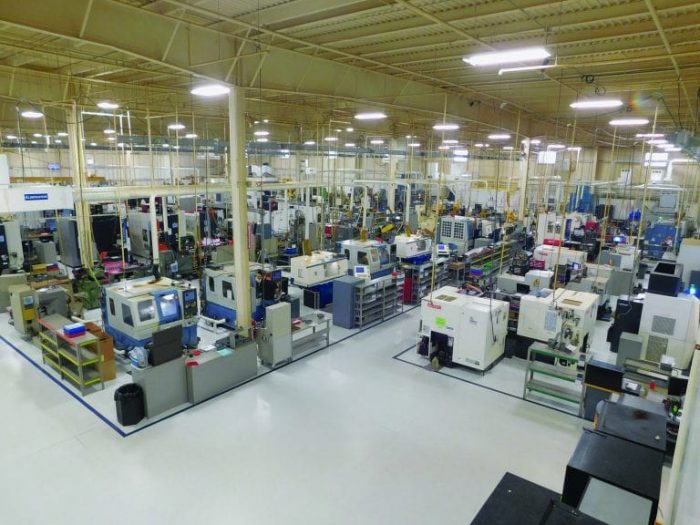 Moeller Precision Tool has the latest technology for manufacturing precision tooling for the stamping and forming industries in its 100,000-sq-ft (9,290-sq-m) facility.

During the remainder of the six-week benchmarking process, DMG Mori and Tebis continued to work together to refine the process, with corresponding improvements in performance. Armed with these results, in 2017 Moeller purchased the HSC-30, along with the Tebis software that would allow the machine to operate at its full potential. This included the Tebis five-axis milling, premier die-mold package, and the Tebis simulation solution.

According to Thiessen, with the Tebis five-axis package, all multi-axis machining operations can be easily and quickly planned and calculated without collisions. Integrated machine kinematics ensure automatic creation of homogeneous toolpaths with tilt direction checking and low tool wear.

“Tebis die-mold offers easy-to-learn and intuitive operation and provides extensive machining options for surface, mesh and hybrid models,” Thiessen said. “It produces high surface quality since its NC part programs are generated directly on CAD surfaces. It boosts users’ continuous improvement efforts since the manufacturing knowledge generated during its operation can be stored in NC templates for future use. Importantly, its digital information flows smoothly throughout the process, and with Tebis die-mold there are no size limitations.”

With Tebis simulation, users can perform the simulation and collision checking during NC programming before post-processing, optimizing machining operations and adjusting them to the actual manufacturing situation. “The key advantage is that [users] do all this directly on their desktop, with no need for synchronization with the post-processor or networking with the machine,” he added.

This capability is significantly more convenient, reliable and efficient than having to re-import the corrected NC code into the CAD/CAM system, according to Thiessen: “Time-consuming and cost-intensive approach processes are eliminated. The machine operator has no need to worry about potential collisions and can focus on other tasks. All components are completely checked, even in the case of multiple setups. Collision checking can also be performed in the background, allowing users to continue working in parallel.”

No matter how capable a machine or software may be, ultimately it takes human beings on the plant floor to ensure the transition from new equipment to productive equipment. At Moeller Precision Tool, one name stands out.

“Josh Clayton, our production engineer, has been instrumental in making this happen for us,” said Hachigian. “With some organizations, people drag their feet when it comes to adopting new technologies. That’s not the case here. Josh is our main user of Tebis; he adopted it enthusiastically and learned it quickly and continues to learn.”

One aspect of that is what Tebis calls its “Lunch & Learn,” a monthly program that allows users to explore the software in a relaxed setting. “Josh has used the Lunch & Learn to answer our questions and help us work out any issues we may have,” noted Hachigian. “Coupled with the standard Tebis training and the strong commitment on the part of our people, starting with our owner who is committed to using the best technology available, this has enabled us to come up to speed with new technology much more quickly than we had imagined.”

Coming up to speed has meant getting tolerances on the new machine that meet—and even exceed—what they had planned for. A big part of this, said Hachigian, is the fact that Tebis’ NC programs are generated directly from CAD surfaces. “Tebis builds toolpaths directly off the model as opposed to building toolpaths off points created from the CAD model. The fact that we are milling to the actual surfaces, not to an image model, has been a major factor in improving accuracy and surface finish. Tebis simulation has been vital to our success,” he said.

“They use very short tooling on the five-axis, which means that the simulation has to be good,” observed Thiessen. This means these small tools are being pushed to the brink. That is because the die punch part they are now running is small and light, even while taking advantage of the high speeds possible with the DMG Mori HSC-30—and still getting the tighter tolerances.

“Our simulation gives them the greater degree of safety they need to achieve these results,” he said.
“The simulation is not an external program but resides within the Tebis CAD environment, giving us advantages right off the bat,” added Hachigian.

“Since our simulation is internal, the user doesn’t need multiple tool and machine libraries,” Thiessen explained. “It can check every single move inside the machine so it’s more than just standard collision avoidance checking. It allows the user to figure out what kind of tool is needed, how long it needs to be, what angle it should be positioned at, and how to perform other planning and optimization functions. He can load this job inside the virtual machine and then quickly perform his collision avoidance checking. [It] is visually simulated on the screen in front of him. The time and accuracy advantages are obvious.”

Prior to the DMG Mori-Tebis partnership, Moeller had a relatively high scrap rate on this part, according to Hachigian. “Now, the scrap rate has been reduced by about 50 percent, we’ve cut half an hour off part production time, and we have achieved the required accuracy,” he said. “Also, since toolpaths are built directly off of the model as opposed to building toolpaths off points created from the CAD model, the surface finish has improved dramatically. In fact, the parts come off looking like jewelry. We foresee more Tebis seats in our future.”