Peterson Machining, Boulder, Colo., celebrates its 30th anniversary in 2019. Its success over the years can be attributed in large part to thoughtful, planned capital investments. Despite already having a good mix of five other machining centers, the addition of two DMU 65 MonoBLOCK five-axis machines from DMG Mori has bolstered the shop’s capabilities. With such significant investment in machines, shop owner and CEO Ronda Peterson knew maximizing efficiency was a key next step.

A presetter wasn’t exactly a new idea for the shop. The Peterson team had been researching different makes and models for eight years, including during four visits to IMTS and a couple of cross-country trips to suppliers’ headquarters. But now, the timing was right. 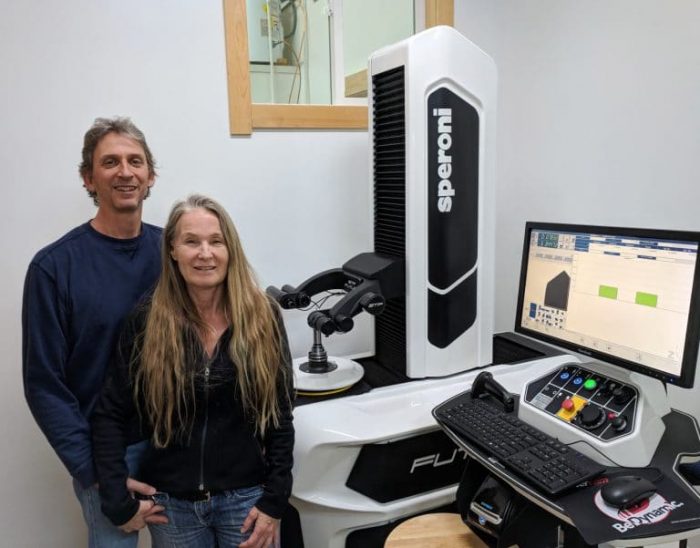 Ronda Peterson, along with Todd Peterson, her husband, partner, founder and COO, knew what their shop needed—a well-built, durable measuring system that could help manage runout and wear of the micro end mills the shop uses; one that could model tools and be used with verification software to optimize the shop’s five-axis machinery and lights-out operations; and one that could move setup adjustments offline.

The Petersons and their team decided on a Speroni FUTURA STP 66 from BIG Kaiser Precision Tooling Inc., Hoffman Estates, Illinois. “Everybody at BIG Kaiser knew what they were doing,” said Steve Carper, lead machinist at Peterson Machining. “Since this was a new technology for us, we really wanted to be able to have that support to get started.”

After a few months working with the system, the results are in. While Peterson Machining is capable of high-production work, Carper says much of what comes through the shop is prototyping and small batch runs—anywhere from one to 500 units. Some of the more challenging processes involve using micro end mills as small as 0.010″ (0.254 mm) in diameter.

“We create parts in some of our machines that you only know the end mill broke because you can see the engraving didn’t go well,” Ronda Peterson said. “The two-camera [high-frequency, sub-pixel, 45X standard optical magnification] ability has been a really big factor in that work.”

Carper added that he noticed discrepancies of a couple of tenths from one day to the next with some in-machine lasers, and that concern—and extra time adjusting at the spindle—has been eliminated since the addition of the presetter. 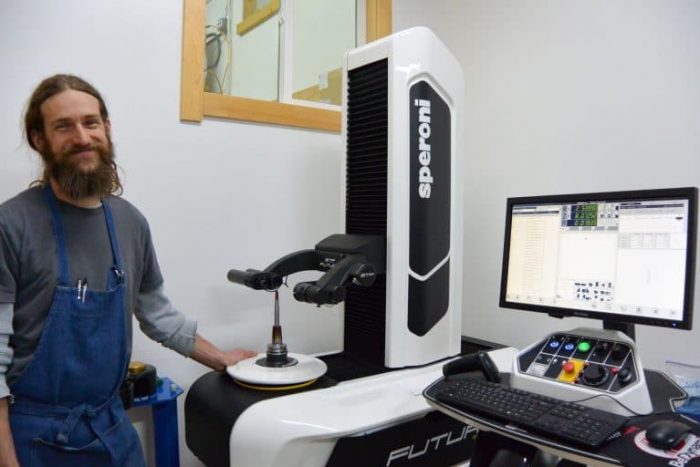 Steve Carper, lead machinist at Peterson Machining. He said that before the installation of the presetter he noticed discrepancies of a couple of tenths from one day to the next with some in-machine lasers. That concern has been eliminated withthe addition of the FUTURA.

Both Carper and Peterson made a point to emphasize the importance of runout, not only in these micro-cutting scenarios, but throughout the operation. “We’re meticulous about runout, in general,” Carper said. “We seem to get much better tool life than before when it would just be a machinist with an indicator. When we take the time to dial in the runout, indicators work fine, but the presetter moves this sometimes time-consuming operation away from the spindle.”

The FUTURA is built with Heidenhain scales, Schneeberger guideways, and a rotating spindle that offers 1 μm concentricity and TIR at 300 mm of less than 5 μm. Setups have become so accurate and reliable that Carper has been able to set tools and use them throughout the shop, in different machines and operations. This is especially useful in a lot of the aluminum work that Peterson Machining does, since it imposes less wear on the cutters.

“I set up a tool and that’s it,” Carper said. “We always post from the presetter, so a tool is ready to go in any machine that can accept the tool. It could run 10 different jobs and we won’t touch it off again.”

That brings us to how the presetter has helped improve the way the shop prepares jobs. The presetter, along with VERICUT verification software from CGTech Inc., Irvine, Calif., allows Carper to simulate cuts before pressing cycle start on the machine.

“We had considered verification software before, but I never really saw the whole picture until the presetter came into play,” Carper explained. “It was like, ‘wow,’ if I was going to do this without this piece of equipment it would be extremely time-consuming.”

Pat Cratty, BIG Kaiser’s assistant product manager of tool measuring systems, worked with the Peterson team to standardize this process and others by making the relatively simple adjustment from negative to positive offsets on some machines. In other words, the machines measure the tool in terms of gage lengths instead of from the tool to the part. 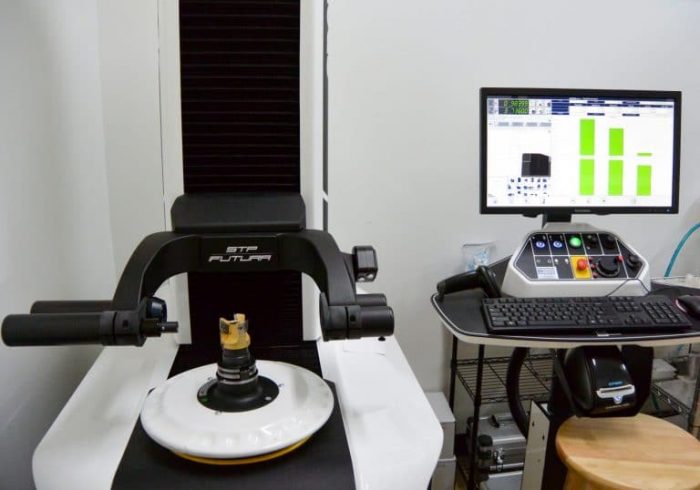 The Speroni FUTURA is built with Heidenhain scales, Schneeberger guideways, and a rotating spindle that offers 1 μm concentricity and TIR at 300 mm of less than 5 μm.

With that simple change done, the software can now take a 3D model of the tool generated by the presetter, the planned G-code, and the machine specifications to identify coding errors, potential crashes and travel limits. Previously, tools would either not be modeled or Carper would sit down with a pair of calipers and draw them out.

“Now, we just drop the tool in the presetter, hit scan and it creates a model for us in about 10 minutes,” Carper explained. “Before, it would take three to four times longer to draw the tool by hand. I didn’t realize how much it was going to help and save until we got it up and going, especially as we get into more advanced five-axis work. We can start working things out way before it’s out on the machine, taking up time.”

As discussed earlier, the presetter introduced time savings in some creative ways, including eliminating resets and touch-offs altogether with some tools, as well as expediting delicate five-axis setups and processes. It’s also accomplished the main thing that machining professionals expect of presetters: move setups offline.

“Before, it would just be me or the setup person with an indicator and I’d take up 20 or 30 minutes of machine time dialing in my tools. Now I can get that all done offline,” Carper said. “I just load the offsets in, press ‘go’ and it just runs.”

Added Ronda Peterson, “We have always dialed in the tools between one and two-tenths runout. You can only imagine how much time that took, and the fact that we’re doing that outside of the spindle is definitely a big advantage for the shop.” 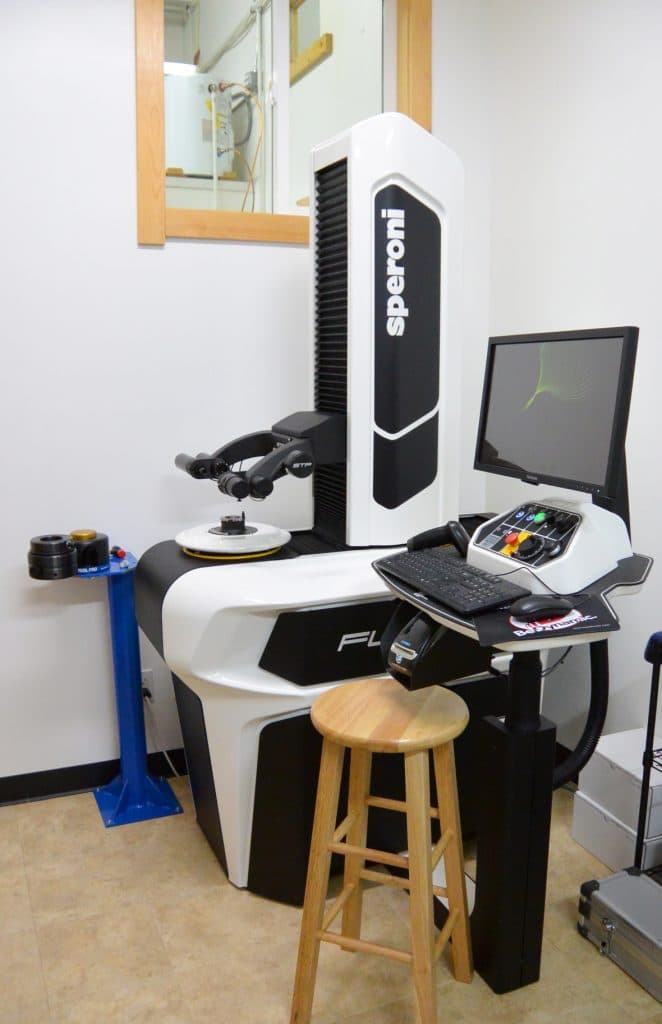 It was, in part, Peterson Machining’s investment in high-end machinery that inspired the addition of the FUTURA. Its biggest yet is planned this summer: a 46,000-lb DMC 85 FD RS6. The DMG Mori mill-turn machine will use HSK 63 tooling. As with the other five-axis machinery at Peterson Machining, the intent is for the Speroni presetter to play a big role in making the most of the new addition.

“The presetter is really going to come into play because we do a lot of lights-out production,” Peterson said. “The presetter will allow us to set up sister tools and designate setups in such a way that we can be confident.”

The precision and capability of the FUTURA has already proven critical, and with one eye always on the future, Peterson trusts that the pearlitic class 40 cast iron build of the presetter will pay off too. “We like the construction of the machine because longevity is important to us,” Carper said. “Since we buy high-end machine tools that we plan to last 20 years, we needed something really solid that would last as long as the machines.”