Difficult materials and high-speed machining don’t just present problems for cutting tools. They can also push toolholders to their limits—and beyond. So manufacturers offer a variety of products designed to get the toolholding job done under extreme machining conditions.

Improving high-speed machining is the purpose of a number of toolholding developments at BIG Kaiser Precision Tooling Inc., Hoffman Estates, Illinois. Recently, for example, BIG Kaiser expanded its line of Super Slim hydraulic chucks to include E25, E32 and E40 options. As their name suggests, products in the Super Slim line feature a slim design that makes them a good fit for finishing processes in confined areas. The smaller HSK tapers now available are aimed specifically at higher-speed machining applications, according to Alan Miller, the company’s engineering and product manager.

“Until we brought this product out, there wasn’t much available for machines that require high-speed, high-accuracy toolholders,” Miller said. 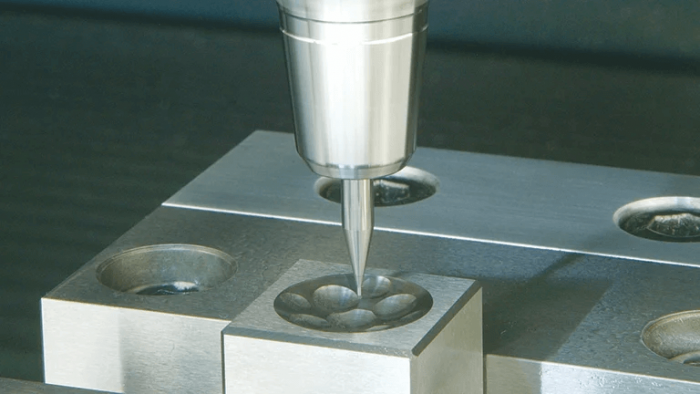 The recent additions to the Super Slim line come in two versions. The standard type is prebalanced for low-runout machining up to 60,000 rpm. The other version, called the Ultra Precision type, has all the features of the standard type but also offers super-high runout accuracy of 1 µm at four times tool diameter.

The latest Super Slim offerings can also clamp tool shank diameters down to 0.118″ (3 mm). According to Miller, accurately clamping such small shanks and holding on to them with sufficient force is a difficult task that requires extremely tight bore tolerancing and finely tuned actuation of the toolholder’s hydraulic system.

Another toolholding development at BIG Kaiser is designed to boost the efficiency of coolant delivery during machining. The goal is to prevent chip jamming, which can cause machine downtime and service calls, as well as increased tool wear and poor surface finishes.Engineered to solve coolant-related problems during high-speed machining, the Cool Flash system emits fluid at high pressure to cool cutting edges and evacuate chips.

As spindle speeds increase, however, so does the difficulty of getting coolant to the tips of cutting tools. So BIG Kaiser has come up with a special coolant nut for its Mega Micro Chuck 6S. The Mega Micro coolant nut improves coolant delivery to small cutting tools used for high-speed micro milling, according to the company. This nut has special coolant holes in its base that are angled in two different planes to direct coolant at micro cutting tools at high speed. Replacing a standard coolant nut with this one can increase tool life by about 35 percent and also improve cutting performance, according to BIG Kaiser. 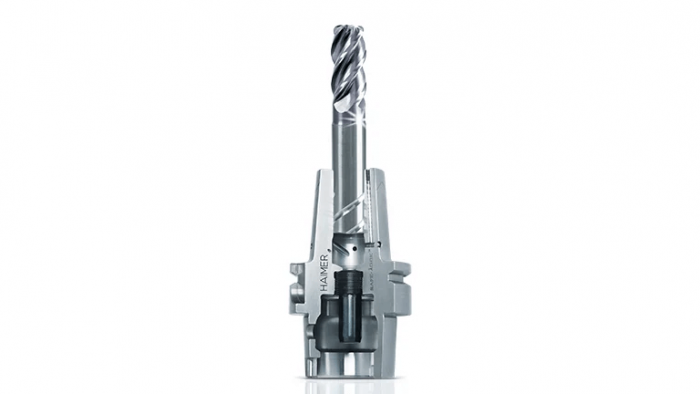 The special nut from BIG Kaiser isn’t the only toolholding advance that can help keep things cool during high-speed machining. Available from Haimer USA LLC, Villa Park, Illinois, the Cool Flash system is designed to optimize cooling even at the highest machining speeds. Instead of using round holes at the bottom of the toolholder, it features small T-slots situated all the way around a cap welded to the end of the toolholder. Diverted into channels that lead to the slots, coolant comes out at high pressure regardless of the machine coolant pressure, noted Brendt Holden, president of Haimer USA.

How? Using slotted openings rather than round holes “is like putting your thumb over the end of a garden hose,” Holden explained.

After coolant shoots through the slots, centrifugal force moves it along the shank of the cutter and then to the flutes. The design does a good job of keeping coolant on the desired paths by preventing it from fanning out, even at high rpms, Holden said.Heimatec tools come with a patented u-tec changing system. The adapter comes in various styles to hold different types of tools. Besides cooling the cutting edge, Cool Flash evacuates chips on the cutting tool. The result is improved runout accuracy and up to 100 percent longer tool life, according to Haimer.

In addition, Cool Flash’s consistency has helped it find its way into some production environments. In these settings, “people didn’t want to rely on the operator to make sure that coolant will be hitting the right part of the cutting tool during a tool change,” Holden said. “If the operator makes an error and coolant isn’t delivered to the right spot, they won’t get the tool life they expected.”

When the Going Gets Tough

One of the biggest challenges shops confront is cutting difficult-to-machine materials. Novel toolholding technologies can help in this critical area as well. One such technology is the patented u-tec changing system from Platinum Tooling Technologies Inc., Prospect Heights, Illinois. Paired with the company’s Heimatec live tools for lathes, the u-tec system allows the use of various toolholding adapters for different applications.

“Most live tools on the market use ER collet chucks that only allow you to use ER collets,” noted Preben Hansen, president of Platinum Tooling. “But if you’re milling difficult materials like titanium and Inconel, an ER collet chuck doesn’t always hold end mills properly. So for our live tools, you can take out the collet and put in an adapter to grip an end mill so there’s no way it can pull out.” 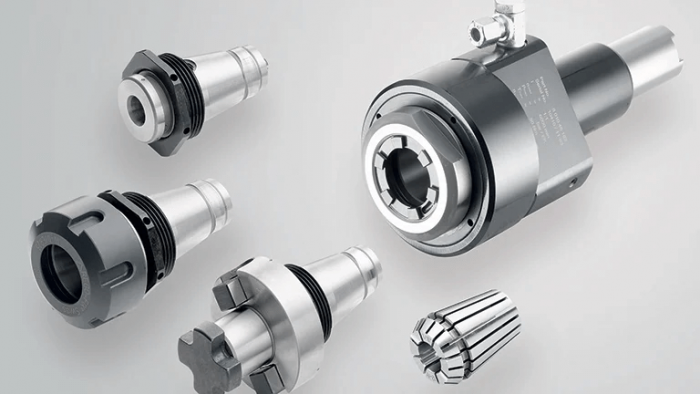 The u-tec adapter has the shape of an ER collet, which fits into a toolholder. The adapter comes in various styles, including side lock, hydraulic, shrink fit and face mill. “A typical live tool would have an ER32 that holds a ¾” (19.05-mm) shank,” Hansen said. “But we can give [customers] an output with an arbor so they can have a 2″ (50.8-mm) face mill on the end of their tool.”

The Safe-Lock system includes drive keys in the chuck and grooves in the tool shank. In the past, the u-tec system was used primarily with low-speed, high-torque tools. Now, however, Platinum Tooling also builds the system into its spindle speed increasers that can boost live tool speeds up to 24,000 rpm.

A Lock to Prevent Pullout

When cutting difficult-to-machine materials, high axial forces can cause micro-creeping movement that will pull a tool out of its chuck. Even frictional clamping methods capable of applying extremely high forces may not be able to prevent micro-creeping. As a result, high-quality workpieces can end up as scrap and shops are prevented from taking advantage of the maximum performance capabilities of machines and tools due to tool-pullout concerns.

To address this situation, Haimer developed the patented Safe-Lock system, which adds the positive locking of a form fit to the frictional forces of a particular clamping system. To prevent milling cutters from pulling out of the chuck during machining, Safe-Lock features special drive keys in the chuck, as well as grooves in the tool shank that engage with the form on the inside of the chuck so a tool is pulled into the chuck as it rotates. About 20 different manufacturers are licensed to put the Safe-Lock groove on their cutting tools, according to Holden.

What about the conventional alternative for locking tools in place, the side-lock end mill holder? “As spindle speeds got higher, people became more aware that those things by nature are way out of balance,” Holden said. “The screw pushing against the flat on an end mill is pushing that tool off center and causing runout.” By contrast, he noted, the Safe-Lock form is 360° around the cutting tool, so no unbalance is built into the assembly. 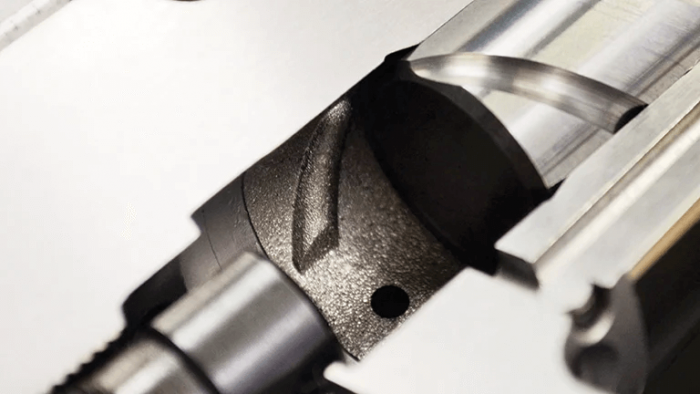 The Safe-Lock system includes drive keys in the chuck and grooves in the tool shank.

Safe-Lock was developed to prevent tool pullout during traditional roughing of difficult-to-machine materials like titanium and Inconel. But with the advent of high-efficiency machining, tool pullout has become an issue with all materials, Holden noted. This machining strategy, he explained, uses innovative programming techniques with machine tool control to peel away material with light cuts in a fast process that uses the full length of cutting edges. “You end up with a very deep cut, but you’re not roughing through the material in a traditional fashion,” he said.

On the downside, Holden added, shops can also end up with tool pullout problems regardless of the material they’re cutting. “People were saying, ‘This technique is cool, but I’m getting tools pulled out when I use collet, milling, shrink fit or hydraulic chucks’ because those systems are only holding the cutting tool by friction,” he said. “And if they go to a side-lock end mill holder, they can’t run as fast as they possibly can because of unbalance. So they have to slow down their feeds and speeds and can’t get the most out of their equipment.”

So Haimer started integrating Safe-Lock toolholding with high-efficiency machining techniques. In some cases, the results have been dramatic. For example, Holden reported, “we’ve had people who were able to machine their parts seven times faster than they could with their old solution.”