Vanek, who’s worked at the company for the past 22 years, said that all programmers make mistakes. The good ones, however, catch those mistakes up front, long before a workpiece is scrapped or a machine tool crashes. One of the tools he uses to ensure this is VERICUT toolpath simulation, verification and optimization software from CGTech Inc., Irvine, Calif. 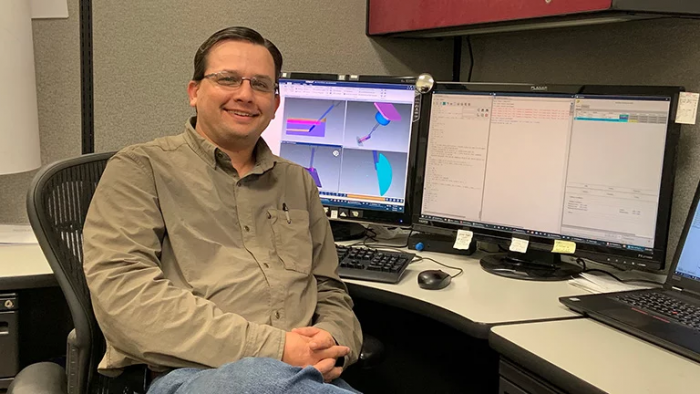 When you are solely responsible for results, use every tool at your disposal to guarantee success. That’s Eddie Vanek’s philosophy behind using VERICUT at MIC Group LLC. In this photo, he is using VERICUT to simulate a five-axis milling project.

MIC Group is a division of J.B. Poindexter & Co. Inc. As with many machine shops in Texas, oil and gas commands a large percentage of the work at this 50+ year-old company, but MIC Group also supports customers in the aerospace, semiconductor, power generation, mining, and other industries, all of which demand the utmost in part quality and on-time delivery.

Anyone serving these markets knows the work materials are demanding as well. Stainless steel is among the easier materials machined at this AS9100 shop, with nickel- and cobalt-based superalloys, titanium, beryllium copper, and even ultra-tough MP35N being common fare. Tolerances often run in the tenths, and surface finishes with Ra in the low teens.

There’s also a wide variety of part sizes, from ones small enough to fit in your hand to truly massive. The turning department where Vanek spends most of his time boasts capacities up to 32″ (813 mm) in diameter by nearly 20′ (6.1 m) long. The milling department for which Vanek also provides some programming assistance offers similarly large work envelopes, as do the EDM, gun and ejector drilling, and honing areas of the shop. In fact, about the only workpiece limitation comes from the shop’s crane, which has a weight limit of five tons (4.54 metric tons). 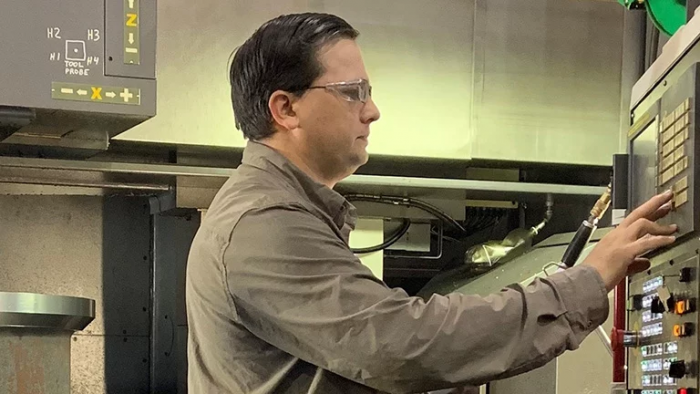 Vanek said each of the CNC programmers at MIC Group is personally responsible for the parts produced with their NC programs. This requires that he and the others are “probably more hands on” compared to other shops, working with the machinists on the shop floor and making sure that everything goes according to carefully-laid plans.

Vanek and the MIC Group team also keep a constant eye out for improvement opportunities. Where some shops wait for a crash before investing in toolpath simulation, or purchase it together with an expensive multi-axis machine tool as a means of avoiding damaging said equipment, MIC Group needed neither of these justifications. “For us, there was nothing spectacular driving our decision to implement VERICUT,” Vanek said. “It was just a way to improve.” 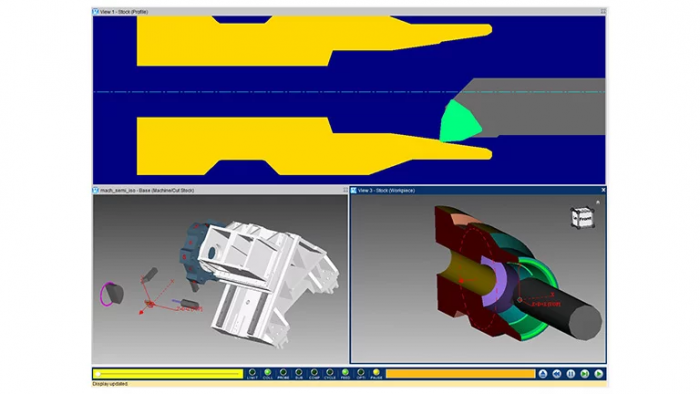 Tight quarters? VERICUT eliminates concerns over tool clearance, according to its developer, CGTech.

That was seven years ago. Since then, the company has adopted another CAM system—ESPRIT from DP Technology—to augment its existing Mastercam capabilities. Vanek noted that this move had the unintended benefit of “basically doubling” the pool of CNC programmers available to them, but at the same time created another reason to be thankful for VERICUT: its ability to eliminate potential problems with post-processed NC code, a serious concern with multiple CAM systems and a dozen or so different machine tool controls.

“We haven’t had to hire anyone for some time now, but VERICUT is also a safety net for us if we do, in that it reduces the possibility of a catastrophic mistake by a newbie programmer,” said Vanek.

For companies thinking about pursuing a toolpath simulation strategy but afraid of the not-insignificant effort involved with modeling machine tools, toolholders, and workholding so as to achieve the most accurate results possible, Vanek pointed out that it doesn’t have to be that way. 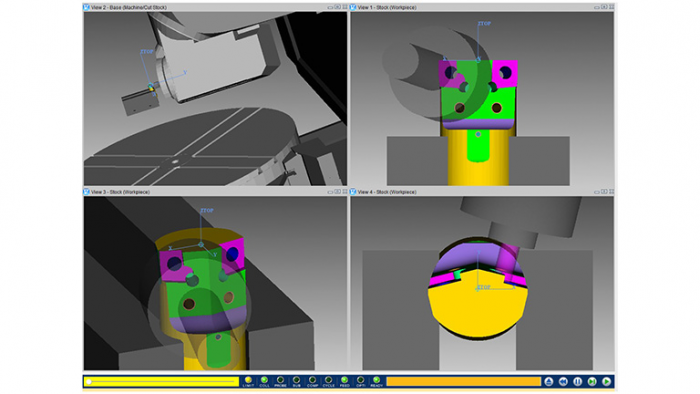 Screen image of VERICUT being used to simulate a five-axis machining operation.

Though MIC Group did have CGTech build 3D models of its five-axis machining centers about six years ago, most of the machines in VERICUT are “pretty generic,” he said. “We have such a variety of machine sizes and ages and types that the modeling efforts were pretty daunting, so we found it easier in most cases to just use a basic model that you can run the code against. There’s probably some room for improvement here, but it gives us the results we need—the ability to simulate post-processed code, check for collisions, and make sure we’re not going to scrap out an expensive chunk of material.”

Nor is there a hard and fast rule that VERICUT must be used on every program, with every machine, every time a program is generated. Vanek said the decision is up to each individual programmer; since that person is ultimately the one responsible for putting the code on the floor, and for whatever happens after, it’s up to him or her to decide the best way to go about it.

As for Vanek, he’s a VERICUT believer, using it for verification of his turning and three- to five-axis milling programs before they are released to the shop floor. Even though the majority of his programs are for two-axis lathe work—a scenario where tool interference is much less of a concern than, say, five-axis simultaneous machining or Swiss-style turning—he explained that “almost everything” still gets a trip through VERICUT before being released to the floor. 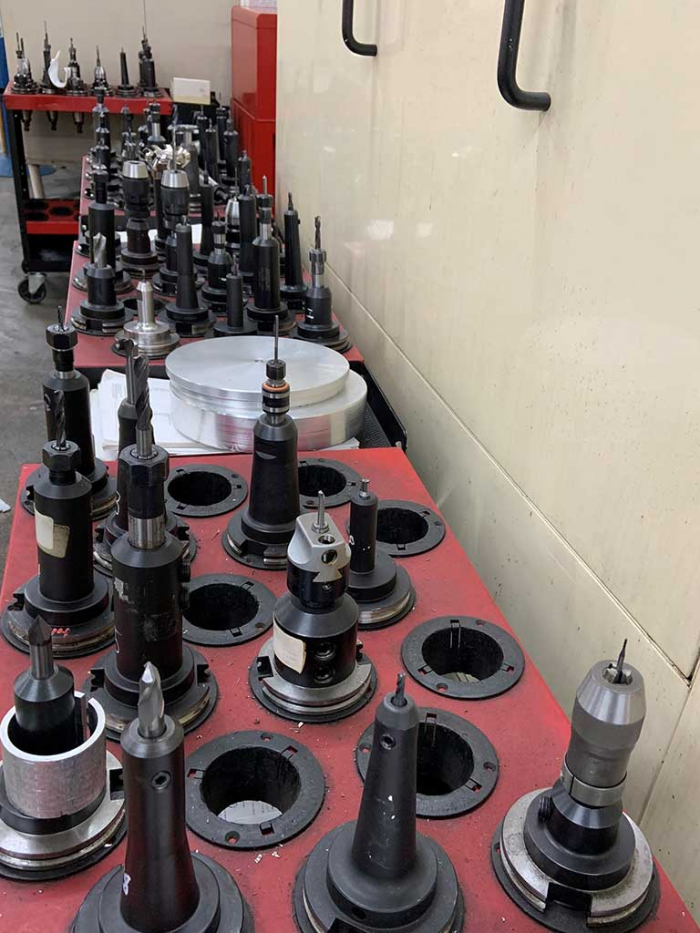 A typical selection of tooling used on one of MIC Group’s many machining centers.

“There are exceptions, of course,” said Vanek. “I wouldn’t take time to set up a job in VERICUT for a simple hand edit, for instance. For everything else, though, I not only simulate the complete toolpath but also use VERICUT to do a dimensional inspection of the cut model. It’s great for catching seemingly minor code errors that could cause major issues. It’s also a second sanity check, just to make sure I didn’t miss something dumb. I guess it comes down to this: even very capable programmers make mistakes, and the best programmers are those who catch their mistakes before putting them on the floor. That’s why I use VERICUT.”