When it’s time to put threads in parts, particularly those made of difficult-to-machine materials, thread mills are often the right choice. Thread mills cut threads with a cutting head typically smaller than the hole, unlike taps that are sized to match the hole diameter. While hole tapping remains a go-to process, thread milling has become a well-established and accepted option, particularly for low-volume, high-precision applications.

A good example of inventive thread mill tools are those offered by Carmex Precision Tools LLC, Richfield, Wis. The company has quietly played a central role in thread mill innovation and adoption for several years, according to National Sales Manager Jim White, a longtime advocate of this tooling segment. Recent additions to its portfolio—the AMT, FMT and Slim MT—continue that tradition.

When White joined Carmex in 2007, thread mills were “a specialty item.” Occasionally he still encounters a customer who has not used them. “Ten years ago, I had people flat out tell me that thread milling doesn’t work. But it’s all in the programming. We are forever discussing programming and the methodology of learning to thread mill,” he noted, particularly when interacting with industry-standard Mastercam. Carmex redesigned its proprietary software about three years ago. “This has really helped solve many end users’ issues with programming.” 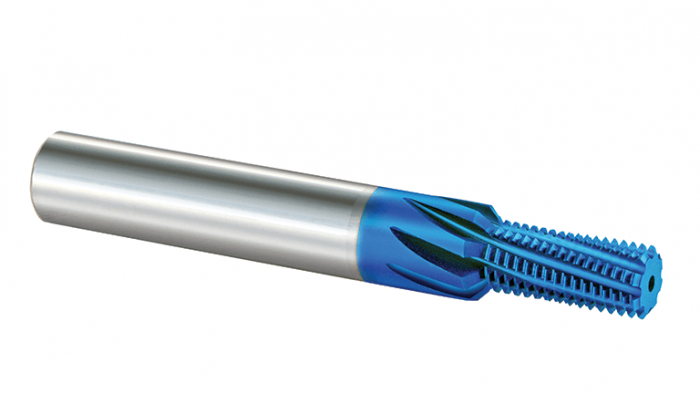 In thread milling, he explained, “we’re not cutting in a straight line but radially. Since we’re programming the centerline of the cutter, the outside edge is moving faster on an inside corner (and slower on an outside corner). You have to compensate for this by slowing the feed rate down on the machine. Our software does this for you. If you don’t, the chip load goes way up and it can break the tool. When we get calls concerning chatter or chip-out, it’s the first thing we look at.”

Then there are other issues, like climb vs. conventional milling. “Climb milling is always preferred because it puts less force on the tool and you get less deflection,” said White. “Our MTSH tools are designed to cut the thread from the top to the bottom of the hole. For a right-hand thread, which most are, that would give you a conventional cut. That’s why we came up with the LR helix tools. Since they rotate counter-clockwise, the cutting motion is climb.”

With a range of options, from commodity-level to high-precision tools as well as coolant-through designs for chip removal, “we’re positioned for performance, but our prices are competitive,” he noted.

From small diameters down to 0-80 UN to high-hardness mills that can handle materials up to 62 HRC, Carmex has created three-tooth mini mills (its MTS and MTSH lines). Other recent additions include:

One recent novel application has been the serration of flat aerospace parts using thread milling cutters. “They put the part on a milling table and run the tool horizontally to cut parallel grooves,” White explained. “The grooves are shallow and similar to UN and ISO threads, but governed by different specifications.”

OSG’s new A Brand AT-2 thread mill, slated to be available in the U.S. by year’s end, allows one-shot threading of difficult-to-machine materials, allowing simultaneous helical boring and thread creation, according to Alec Janson, a product engineer with OSG USA Inc., Irving, Texas.

The AT-2 is the cousin of the earlier AT-1, which allowed one-pass threading for an array of materials, Janson explained. With the upgraded version, “we are going to treat this like a helical boring operation that you would have with an end mill, with your helix angle at the pitch of the thread.” Starting with a solid block, operators “mill down helically to create that full thread in one shot.”

The target materials to machine with the AT-2 are those up to 65 HRC, whereas the AT-1 handles materials up to about 45 HRC. Die-and-mold applications are one potentially useful area, Janson noted, with the tool protecting valuable mold bases. Advanced materials suited for this thread mill include Inconel, titanium, nickel alloys and potentially carbon steel castings.

Key to the AT-2’s performance is its DUROREY coating, Janson said. “That’s our most advanced milling-grade coating.” The multilayer coating features a super heat-resistant top layer, then alternating wear-resistant layers down to right above the substrate. 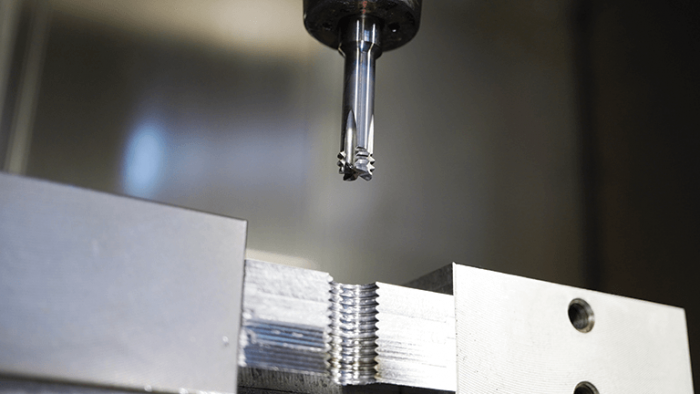 The design also features three teeth with different lengths. The first tooth acts as a roughing tool, removing about 50 percent of the thread; the second tooth removes the rest of the thread; and the third tooth helps ensure accuracy. The front of the tool also features a flat surface for further efficiency. “It acts a lot more like an end mill at the very tip,” he said. The AT-2 also features axial coolant-through functionality.

As the AT-2 has been available in Japan since the summer, customers—particularly in automotive applications—have been using it to machine on top of pre-cast holes, Janson added. “If you’re off by 10 thousandths of an inch on that cast hole, you could chip or break a tap, which is miserable to deal with.” With the AT-2, “[the machine is able] to feed it quicker because it is cutting less, but it won’t have the same fear [of chipping or breaking]—you’ll be able to machine that thread as normal. [It will] create a thread closer to true position and with a better margin of safety.”

In terms of programming, OSG offers ThreadPro software, a self-contained thread mill program generator that works with the AT-2 and other OSG tools. “That cuts out a lot of difficulties with specific angles and numbers either directly on the CNC or in Mastercam or other CAM programs,” he said.

“Most whirling done on Swiss machines is for smaller-diameter, longer parts,” explained John Kollenbroich, head of product management for Horn USA Inc., Franklin, Tenn. Those parts can range from 4-10 mm in diameter and 75-150 mm or more in length.

Regular 60° threads can also be manufactured this way, he noted, but most companies opt for conventional single-pointing methods. But thread whirling—in which inserts are mounted inside a cutting ring and rotated around a cylindrical component—“allows the customer to usually take one pass to create a finished profile with exceptional profile tolerance and surface finish.” The whirling unit can pivot or swing the cutter at different angles to closely match the helix of the thread being produced, he explained. “The cutter ring, which is unique to each manufacturer, including Horn, holds the inserts to machine the component.” 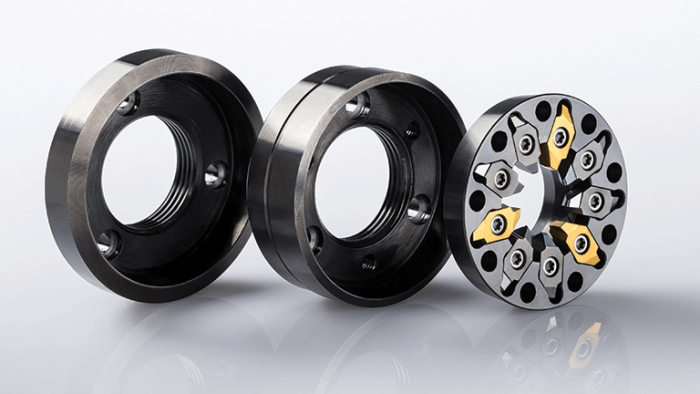 Horn offers several options for whirling. The company’s most popular whirling ring is the standard Horn design. “This system accepts our S302 inserts, which are a triangular design having three indexable edges,” Kollenbroich said. “These inserts are precision ground for extreme accuracy and excellent repeatability.” Horn’s standard whirling rings fit whirling units from many machine manufacturers, he added, including Star, Citizen, Tsugami, Tornos and many others.

Horn also offers its Turbo Whirling design, “which uses our S271 insert—a double-side insert with two indexable edges. This offers customers the option of six- or nine-pocket cutter rings and uses a unique design that allows for roughing and finishing in one pass. This allows for much faster feed rates and increased tool life. Feed rates can easily be twice what is run with our standard design.”

Lastly, Horn offers its Jet Whirling cutter, in collaboration with W&F Werkzeugtechnik. “Experts from both companies jointly developed a whirling system with an internal coolant supply” to let customers whirl threads without the need for external coolant lines. “It addresses one of the biggest issues customers face when whirling: getting coolant directed properly to reach the cutting edge of the inserts. The guarantee of proper coolant flow to the cutting edge creates improved tool life and offers superior surface finishes,” said Kollenbroich. Horn’s Jet Whirling uses the S302 or the S271 insert, depending on the cutter design.

Addressing the three critical elements of thread milling—chips, feed and stability—Emuge has introduced its ZGF-S-Cut (see photo on page 50), which Blandon said is “ideal for hard metals and exotic materials that are designed to resist cuts or fractures. This single-plane cutting tool features three rows of cutting teeth, where the first tooth has a truncated form and acts as a rougher, removing most of the material for the following cutting teeth to come after, finishing the rest of the profile.” 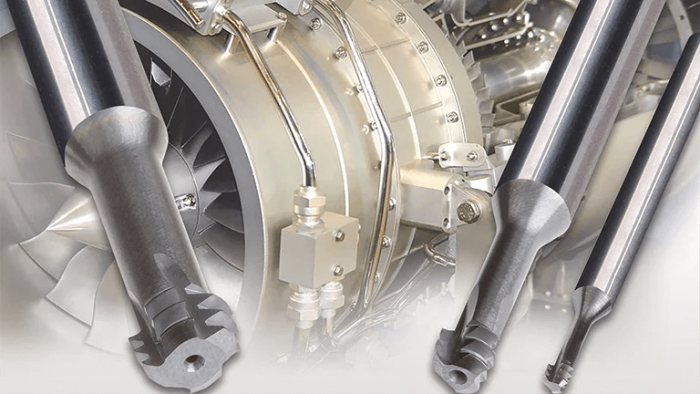 The ZGF-S-Cut by Emuge is tailored for hard metals and exotic materials common in aerospace and medical applications and is designed to resist cuts or fractures. The single plane cutting tool features three rows of cutting teeth.

These tools “are designed to be run with a left-hand spindle rotation,” he added. “A climb milling routine effect will result when combining this rotation with the 10° left-hand flute helix angle on the cutter programmed in a counter-clockwise rotation but entering from the top of the hole in a conventional clockwise milling routine path.” Dedicated to producing one-size thread pitch, these tools feature a multilayer TiAlN-T46 proprietary coating, said Blandon, “providing great cutting-edge protection for increased tool life in abrasive and edge-wearing materials.”

When combined with the Emuge FPC milling chuck, “we create an ideal setup for successful thread milling in exotic materials. The FPC’s precision holding power allows for shanks of 3 mm or 1/8″ to be well held.”

Another new Emuge thread mill is the ZGF-Z, featuring a single row of teeth and more cutting edges via the Z geometry. Tailor-made for shops doing special production runs and low volumes, Blandon said, “in almost every case, when we compare cycle time of our standard single plane cutters with the ZGF-Z cutters featuring an increased number of flutes, there is a reduction in cycle time of about 50 to 70 percent, just by going from three to five flutes. These tools let users combine several thread diameters and pitches with a handful of tools.”