Expect at least two recessions, or downturns in GDP growth, in the next few years. That is the prediction of Brian Beaulieu, CEO and chief economist for ITR Economics. The good news is that he maintains an optimistic forecast for the long term. However, according to Beaulieu, there is no question if there might be a recession in 2020. “That is already preordained,” he said, speaking at WESTEC in September 2019. “You either prepped for it or you didn’t. What you should be wondering is, when is the next rising trend and how good is it going to be?”

More importantly, businesses need to be well positioned to take advantage of that next rising trend.

Using its proprietary methods for forecasting the economy based on a set of leading indicators, ITR claims a 94.7 percent accuracy out to four quarters in the future using its method. Beaulieu’s forecast now is that we are either in or soon will experience a minor recession lasting for part of 2020. “It is not going to be like the Great Recession. This is just a little, dinky down-turn we’re going through,” he stated (with a tongue-in-cheek comment that the term “dinky” is a highly technical economic term to be used with great care.)

Beaulieu believes the near-term recession is not worth spending a lot of time worrying about. The rising trend coming out of it and the next predicted recession in 2022-23 need more attention. He forecasts the 2022 downturn as far less dinky. “So, as we go through ’20 and ’21, I’m hoping you’re going to ask yourself, what can I do to make sure I’m not participating in that downturn?” he asked rhetorically of the WESTEC audience. His answer to his own question was simple—do something new. 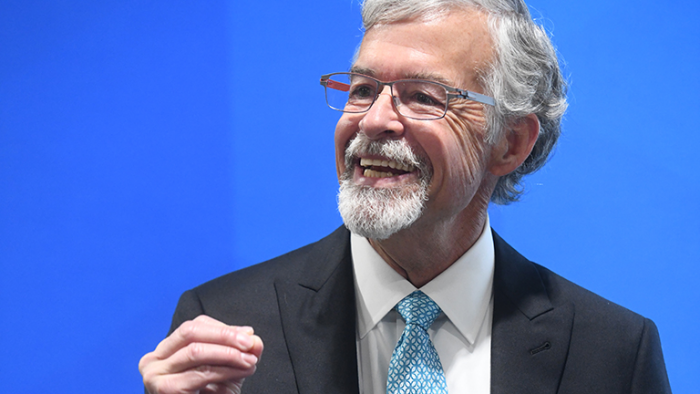 A new business or a new product line that is less than seven years old tends not to go through business cycle declines, according to Beaulieu. Companies with these assets gain market share. They take share away from somebody else or they service 100 percent of a new market they may have created, Beaulieu stated.

The downside? Thinking this way means willingness to accept change to grow into the future. “Most of manufacturing in the U.S. wouldn’t be here today if we weren’t willing to change,” he said. He has cautions as well, since change does not come easy. “We’re slowing down in our willingness to change, and I’m asking you to reach down inside of you to find that fire and accelerate that change.” To thrive—not just survive the trends—businesses must do something new and innovative, and bring new value to their marketplace, said Beaulieu, adding that “Doing nothing new is not an option.” He shared with the WESTEC audience one of his favorite quotes from W. Edward Demings, the 20th century quality engineer. “It is not necessary to change. Survival is not mandatory.”

Natural Advantages for the U.S.

Beaulieu also shared with WESTEC attendees a few tidbits that added up to good news for the U.S. Currently the GDP of the U.S. comprises 24.2% of the world’s total, followed by China with 15.8%, based on data from the International Monetary Fund (IMF). The rest of the world shares out the rest in single digits or less. “We have been the world’s dominant economy for over 80 years,” he said, and he sees no reason to think that will change.

Undergirding the powerhouse economy of the U.S. are three factors. 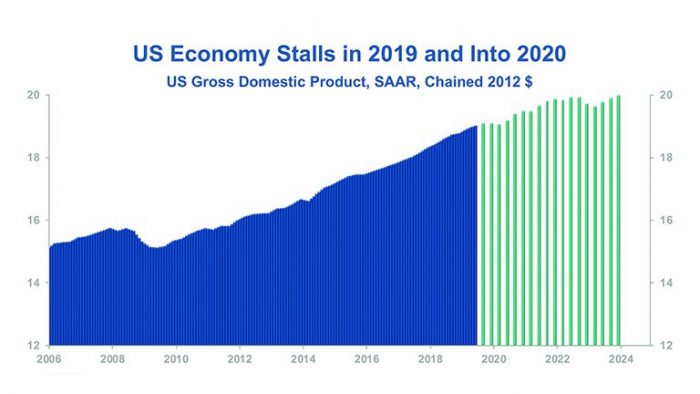 ITR Economics, using an analysis method based on leading indicators, predicts one small and one larger recession amidst generally growing GDP in the next four to five years.

“[The U.S.] has a growing population,” he said, while many other advanced economies such as Germany, the United Kingdom, and Japan do not. He presented data that showed the population of the U.S. growing six percent from 2010 through 2018.

Secondly, he cited as a key factor that the rule of law is a prime principle of U.S. society, if at times imperfect in its implementation. (Many argue that the U.S. might be the most litigious country in the world. Apparently, there is an upside to our abundant access to lawyers, courts, and lawsuits.)

Perhaps most important is the U.S. position in natural resources, especially energy. For the U.S. that has especially meant more natural gas.

According to data from International Energy Agency (IEA), the U.S. produced 760 billion cubic meters of natural gas, or about 20.4% of the world total. “That is a critical, competitive advantage we have for manufacturing in the United States,” said Beaulieu.

This abundance of natural gas creates cheap energy costs of all kinds, such as electricity. The number two and three producers of natural gas are Russia and Iran, countries that are struggling to enhance their GDP and living standards, challenged with societal climates not friendly to the rule of law and business. “When you have that much natural gas underneath your feet, you own manufacturing,” he said. 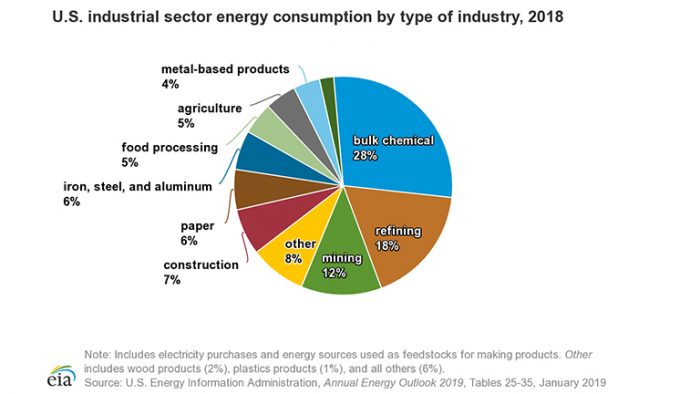 Independently confirming this assertion, a white paper prepared by Kleinhenz & Associates for Shale Crescent USA and the Ohio Oil and Gas Energy Education Program (OOGEEP) asserts that the U. S. has saved over $1.1 trillion over the last ten years due to cheaper natural gas prices.

What turned the tide of once-rising energy prices was the development of horizontal drilling techniques. This delivered vast gas reserves trapped in shale deposits. It drove prices down. The Kleinhenz study noted that natural gas prices at the Henry Hub price have declined from $8.86 in 2008 to $3.08 in 2018, a 65 percent decrease.

There is every reason to think this price will remain stable, though it probably will not decline further. “[U.S.] electricity costs are the envy of the world. They’re one-third of what they are in Germany. They’re averaging half of what they are in Europe,” Beaulieu stated.

The result? He believes the U.S. manufacturing sector is not only healthy, but will remain so. Using data that reflects industrial production output as compiled by the Federal Reserve Bank of the U.S., he showed that the U. S. produced more manufacturing output in 2018 than ever. Its data shows a manufacturing index of 109.6 in 2018 compared to less than 45 in 1975.

He also acknowledged that fewer factories exist today than in 1975, which also means fewer people employed in manufacturing, reflecting increased automation (and general cost-cutting.) The mismatch between manufacturing output and manufacturing employment can be confusing. 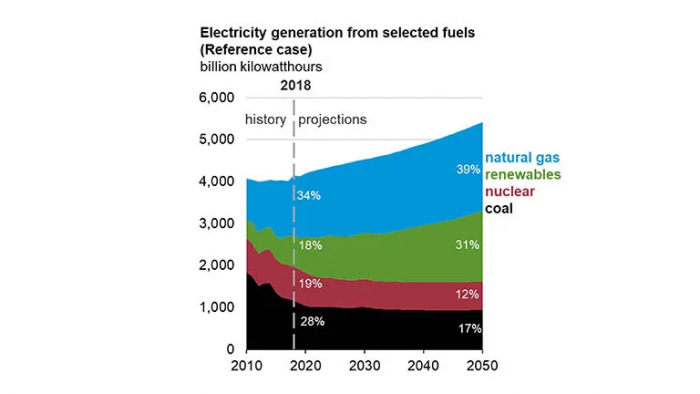 Natural gas will continue to be the largest U.S. energy source in the coming decades.

Some industries will find this energy advantage better suited to their needs than others. According to the EIA, although every industry uses energy, just three account for most of the total U.S. industrial sector consumption of energy—bulk chemical, refineries, and mining. These three combined account for 58 percent of the total U.S. industrial sector energy consumption.

Not all is rosy, however. The ongoing Brexit saga, among other economic trends, has revealed latent nationalism that will most likely lead to more barriers to competition and more inefficiencies in global markets—especially from trade tariffs.

The Trump administration has been conducting a trade war against China, including tariffs on almost all imports from that nation. Tariffs are taxes levied on imported goods. They are paid by companies importing products and are usually passed on to customers. They are not payments made by one country to another. The U.S. and China have been negotiating to resolve or lessen trade disputes.

In addition, there have been trade tensions between the U.S. and the European Union, Japan and South Korea. Trade conflicts have reduced export markets for U.S. manufacturers. Trade battles have been cited by the Institute for Supply Management that its manufacturing index broke a 35-month streak of economic expansion earlier this year.

The U.S. has a pending agreement with Mexico and Canada, intended to replace the North American Free Trade Agreement. However, that accord hasn’t been ratified yet by the U.S. and Canada. In October, the U.S. also reached a trade agreement with Japan. 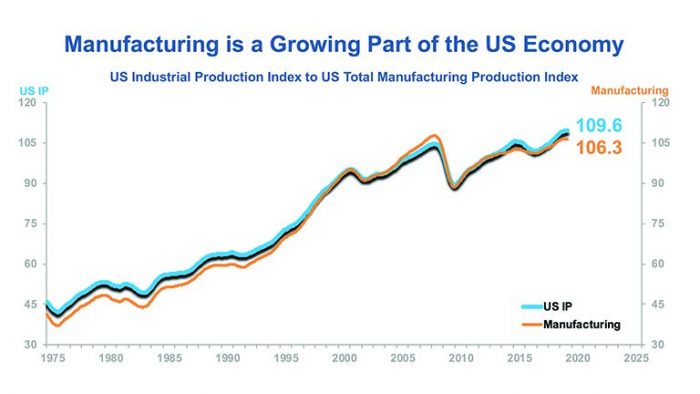 After recovering from the effects of the Great Recession, U.S. Industrial output has reached a new high.

“Globalization, my friends, is on the way out. Nationalism is on the way in,” Beaulieu said to the WESTEC crowd. “Historically trade tariff and protectionism are all about protecting an industry or trying to stimulate demand for U.S. labor,” he said. But he also made a point that U.S. protectionism stimulates demand for U.S. labor when there is no U.S. labor to be had, given that the unemployment rate is at an all-time low. That drives up the cost of labor.

But, more importantly, between rising nationalism and protectionism is shelter from competition. “Reach down into your entrepreneurial selves to continue to compete against yourself,” he said. “It is the only way you are going to be able to still stand when times go bad. If you can get fat, get lazy, you’re not able to compete during the tough times because you haven’t had to.”

“People who say the U.S. is no longer a manufacturing powerhouse are not telling you the truth,” he said. “They’re not telling anybody else the truth either.” Beaulieu confidently predicted that the U.S. will continue to be the world’s number one economy for the next 100 years.