A Shop Where a Machine Loads Itself

A Shop Where a Machine Loads Itself

Instead of investing in an external robotic loading system, this shop adopted technology that lets a machine tool load parts on its own.

Every day, test engineers at Krefeld, Germany-based Deutsche Edelstahlwerke Specialty Steel (DEW) determine the quality of the steel it produces by way of tensile and notched-bar impact tests. With a length of 55 mm and a square cross section of 10 by 10 mm, the standardized test specimens are rather unspectacular from a machining perspective. And yet their production requires one operator to manually load about 2,500 individual samples each month.

“It takes around 15 minutes to produce a set of three specimens on our Doosan DNM 400 VMC once the job is set up,” explains Christian Richter, team coordinator material testing at DEW. “Two machining operations (op. 10 and op. 20) in two setups are necessary to machine each part. Although it takes little more than one minute to manually re-clamp the parts from op. 10 work to op. 20, the operator has little time to tend more than just the one machine.”

As a result, Mr. Richter investigated various possible automation solutions to increase flexibility and machine utilization. The goal was not to reduce staff, but to open availability for employees to perform other more value-adding tasks. What’s interesting is that the solution the company chose didn’t involve a robot.

Letting the Machine Load Itself

After initial thoughts about having a robot tend the machine, the shop consulted with representatives from workholding equipment manufacturer Schunk, who suggested its “Lean Automation” solution. This solution is designed to easily, quickly and cost-effectively automate machine tools without a robot. The underlying principle is simple: Instead of investing in peripherals, elements already present in the machine are utilized to automate parts handling. These include spindle travels, toolholders, the supply of compressed air or coolant, the ATC and the workpiece.

Schunk’s “Lean Automation” solution uses machine tool elements such as spindle travel, toolholders, the supply of compressed air or coolant, the ATC and the workpiece – not a robot – to automate parts handling.

The necessary additional handling and cleaning modules are clamped into toolholders via a shank interface and placed in ATC pockets to be called up when necessary. Schunk’s Lean Automation grippers are actuated either with coolant or compressed air, which is supplied internally via the shaft interface with the connection module.

“We liked the idea of loading the machine from the inside as it was not only an economical way to automate it, but safe and space-saving as well. Everything happens inside the machine; shut the door and run,” Mr. Richter says.

For loading of op. 10 work, a Schunk universal gripper with GSW-B interface, which is clamped in the machine spindle using a conventional toolholder, moves to the workpiece magazine and removes a waterjet-cut blank to place it in a Schunk Tandem KSP-LH plus 160-IN pneumatically actuated, two-jaw clamping block. (The clamping block has an 8 mm jaw stroke and 20 kN of clamping force.) Then, the ATC swaps the gripper unit with a cutter for machining to begin.

For loading, a Schunk universal gripper that is clamped in the machine spindle using a conventional toolholder, moves to the workpiece magazine and removes a waterjet-cut blank to place it in a clamping block.

Once completed, the VMC swaps in the gripper that moves the machined parts to a station that rotates the workpieces 180 degrees. For the op. 20 work, the gripper places the indexed parts in the second two-jaw clamping block, a Tandem plus 160 with 3 mm of jaw stroke and 45 kN of clamping force. Finally, it loads a new blank into the op. 10 clamping block and the cycle continues. The clamping blocks are equipped with inductive monitoring of the jaw position to help ensure automation safety.

Both the op. 10 and op. 20 work consists of two succeeding machining operations to cut the blank into three specimens. Finally, at the end of op. 20, the three specimens are separated, pushed together as a package, removed with the gripper and placed in defined positions in the workpiece magazine.

To prevent excessive forces acting on the machine’s spindle during part loading, the spindle gripper uses a Schunk SW-B shank interface and compensation unit to adapt to inaccurate workpiece tolerances and positioning in six degrees of freedom. Before each machining cycle, the clamping devices, the part indexing station and the blank are cleared of chips and dirt using a cleaning device. 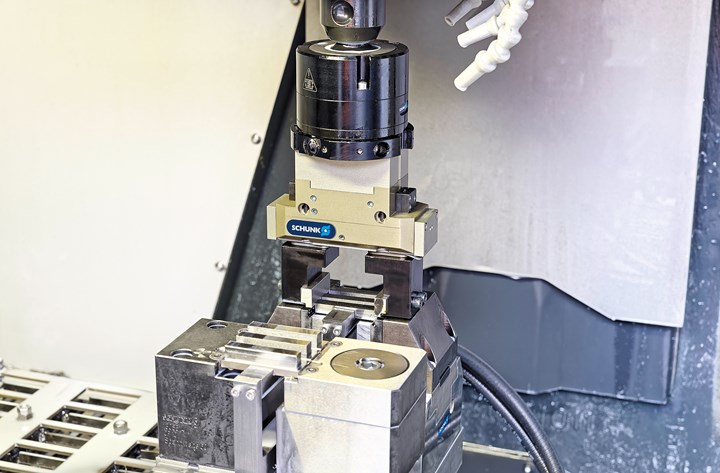 After the last machining operation, the three specimens are separated, pushed together as a package, removed with the gripper and placed in defined positions in the workpiece magazine.

“Automating our machine with the clamping system, the indexing device as well as the ATC and workpiece magazines, we can maximize the efficiency and available space of the machine table,” Mr. Richter says. “Whereas in the past, each test specimen was manufactured individually, three specimens can now be simultaneously machined, and non-productive handling and setup times reduced.”

In order to remain as flexible as possible and produce one-off parts despite the integrated automation solution, Mr. Richter equipped the machine with a Schunk Vero-S NSL plus 200 clamping station. The modular, quick-change pallet system allows for a precise resetting of workpieces, clamping devices or other equipment outside the machine.

For Mr. Richter and his team, the greatest benefit of this Lean Automation solution is the operator’s increased flexibility and the value-add in having him pursue other tasks while machining of the test specimen runs unattended. They also appreciate that the system does not require any special robotics know-how. “Our operators’ programming skills are all that are needed to run the machine; we do not need any special automation knowledge and can manage the process on our own and react flexibly if necessary.”

Moreover, the Lean Automation system can be moved from one machine tool to another. “Ultimately, it’s about a gripper, a clamping system and a toolholder,” Mr. Richter says.

And the company’s next step is already in focus: “As soon as the employees are completely familiar with the new system and everything is working smoothly, we will implement the next stage of automation and produce several specimen sets unmanned.”