Originally  titled ‘When Metal Feels Under Pressure (In a Good Way)’

At first glance, the machine shop in the back of Lambda Technologies, a Cincinnati-based manufacturing company, seems pretty average. It has a suite of vertical machining centers (VMCs) whirring away as workers busily hop from station to station. Compared to most shops, however, it’s relatively quiet. That’s because the majority of the VMCs are not actually cutting material. 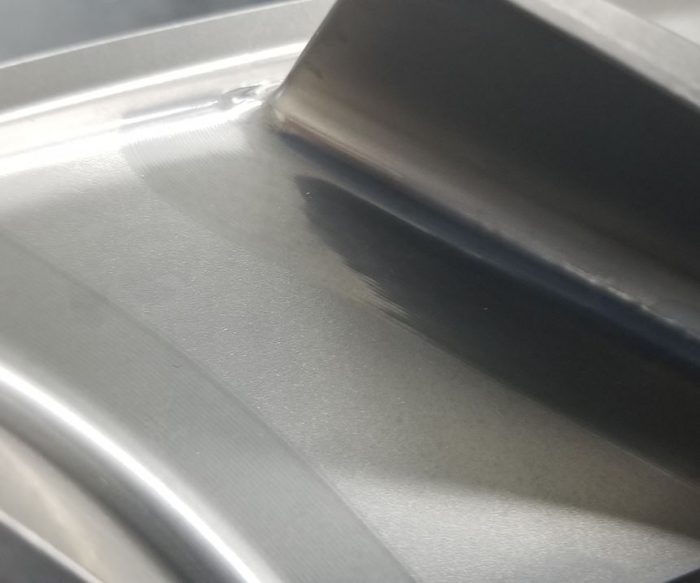 Low-plasticity burnishing is a finishing process developed by Lambda Technologies that strengthens a part at specific areas while minimizing the effect on the finish. In this example, the company strengthened the base of the turbine blades, which you can see in the shinier finish.

For those, the buzzing of cutting tools slicing into metal is replaced by the comparatively subdued whirring of hydraulics. A sharp eye might also notice that the controls for those machines bear none of the logos of major CNC manufacturers. They, like the hydraulic pumps attached to the modified five-axis machines, are custom designs the company has developed over the years for the signature metal-finishing process it offers customers: low-plasticity burnishing (LPB). 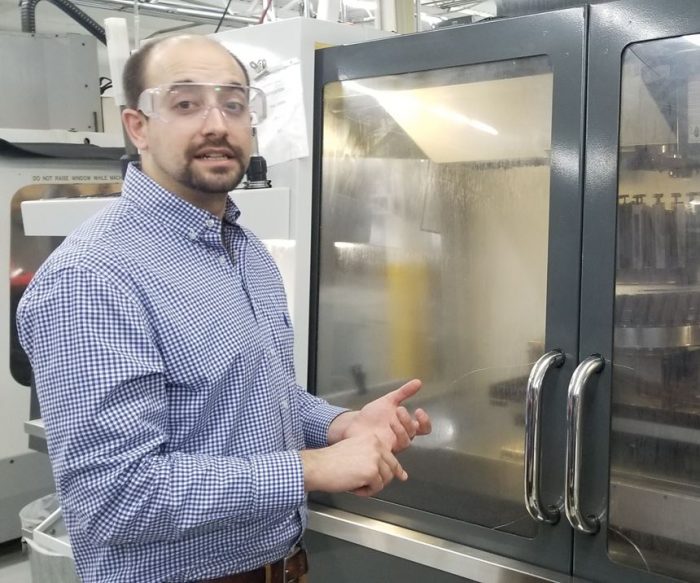 The company uses a suite of VMCs to both produce its burnishing tool and perform burnishing operations. According to Operations Manager Michael Prevéy, performing burnishing on five-axis machines enables Lambda to treat almost any part geometry.

LPB is a burnishing process in which the pressure applied to the workpiece using a hydrostatic roller-bearing tool of Lambda’s own design just exceeds the material’s yield point. The process requires extensive metallurgical knowledge in addition to precise control of burnishing tool positioning and pressure. Maintaining this expertise has enabled Lambda to significantly lengthen the working life of parts without significantly altering the shape or tolerance of the part. While not a new process, LPB has proven its effectiveness over recent years, even achieving Federal Aviation Administration (FAA) acceptance for repair and alteration of commerrcial aircraft components.

And this all came about from a trip to Disney World. 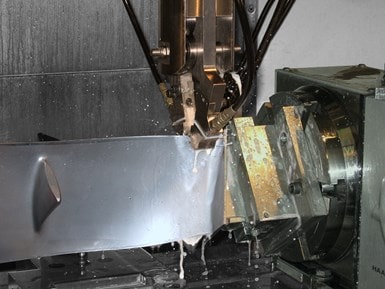 According to Lambda Operations Manager Michael Prevéy, the idea behind the company’s surface treatment system was born during a family trip to Disney World in the 90’s. Looking across the lake in the center of Epcot, his father, the company’s CEO and Director of Engineering Paul Prevéy, saw the geodesic dome of Spaceship Earth sticking up over the water. From that image, he conceived and developed the idea of his hydrostatic burnishing tool.

The elder Mr. Prevéy co-founded the company as Lambda Research Group in 1977 with Professor B. D. Cullity, an expert in the industrial use of X-ray technology. It initially specialized in material testing using x-ray diffraction and other technologies, focusing largely on measuring residual stress in metals and ceramics. In the late 90’s, Mr. Prevéy began developing surface treatment solutions based on the company’s institutional knowledge about material stresses.

The burnishing tool envisioned that day at Disney is a hydrostatic roller burnisher design. Coolant is pumped through the machine tool’s spindle and into the tool to hold the roller bearing in place using an in-house hydraulic system and custom toolholder. The company says consistent pressure maintaining the position of the bearing enables the process to achieve high burnishing precision. After developing the LPB process, the elder Mr. Pevéy then formed a second division, Surface Enhancement Technologies, in order to implement it. Through this division, Lambda contracts with other companies to perform LPB operations on parts in addition to selling and leasing burnishing tools to those customers who have high enough part volumes to make dedicating a machine tool to burnishing economical.

So far, Disney has not demanded royalties.

Pressure, Pushing Down on Steel

Like other burnishing processes, LPB strengthens a part by compressing a layer of metal so that it resists fatigue, preventing cracks from forming deeper in the part. Thanks to the precision provided by the company’s hydrostatic roller-burnishing tool, it is able to apply just enough pressure to slightly exceed the yield point by an appropriate amount. 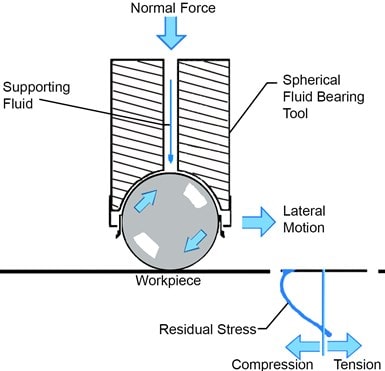 This diagram shows the hydrostatic roller-burnishing tool. This control enables the company to apply just enough pressure to just exceed the yield point at which the material deforms plastically.

By exercising this degree of control, the tool avoids breaking the material’s crystal lattices. This is important because broken crystal lattices, which can be caused by other surface treatment operations such as shot peening, can revert back to normal when exposed to high temperatures, losing the benefits of the surface treatment. Moreover, the burnishing tool is designed to work with any CNC-controlled machine, including robots, machining centers, lathes and even five-axis machine tools. This enables the company to strengthen parts with complex, contoured geometry at their weakest points.

Testing Your Metal for its Mettle

Developing an LPB process for a given application requires a keen understanding of the material. Dr. N. Jayaraman, who has degrees in metallurgical engineering and physics, contracts with Lambda as its materials expert. “The goal of LPB is to sculpt the residual stresses in the part to prevent cracks from being able to form,” he says. “To do this effectively, one must know the yield point of any material one works with.” Because the company dedicates resources to understanding the material properties of many alloys, it can burnish a variety of metals, including difficult-to-machine metals like titanium and Inconel.

According to Michael Prevéy, understanding stress is vital in approaching a burnishing application. “The compression we produce creates an equilibrating tension in the rest of the part,” he says. “This means that the stress we introduce is spread out evenly through the volume of the non-compressed areas.” With stress spreading out, the greater volume the part, the less concentrated the stress present in the underlayer. Conversely, lower-volume parts do not spread out the stress as much. 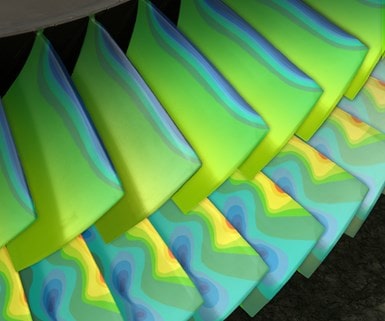 Every job Lambda takes on involves a complete analysis of the material and stresses. Pictured here is an FEA of a turbine, which enables the company to identify points of high stress.

To understand the stresses of the part, Lambda performs finite element analysis (FEA). “We perform a full scan and FEA of the part,” Mr. Prevéy says. “Using that, we can look at the magnitude and locations of part stresses to understand where burnishing will do the most good.” Going even further, Mr. Prevéy says the company can sculpt the stress patterns in the part, assisted by the multi-axis capabilities of the burnishing process. By mapping the stresses in three dimensions, the company says it can lengthen the life of many parts by a factor of 1,000.

While Lambda sells and leases its LPB tools, it usually performs the burnishing operations for customers itself on its modified VMCs. It uses presetters and touch probes during setup to maintain accuracy and reliability, and it had to develop its own custom toolchangers to meet customer needs for certain complex parts, designed around the need to connect the tool to the hydraulic system. As the LPB process requires only positioning and pressure, the company is not limited to simple geometries, and it can perform both wet and dry applications depending on the application. 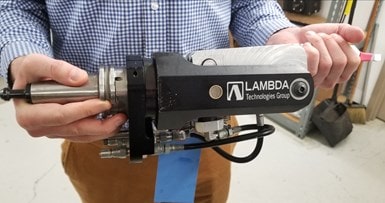 The tool consists of customized tip that contains the roller bearing and a body that plugs directly into the toolholder and hydraulic system. The hydraulic tubes run through the body to run fluid to the tip, which can be customized by hooking it or extending it to fit into even difficult-to-reach geometries. The coolant holds the bearing in place regardless of the angle of the tip or pressure necessary for burnishing. During the burnishing process, the bearing rolls freely while the hydraulic pressure keeps it from shifting its position.

Lambda machines many of its LPB tool components on a suite of Haas VMCs located near the modified burnishing machines. Many of the tools it produces are customized to specific applications, such as those that treat the first stage low-pressure compressor (LPC1) vanes for the Pegasus engines that power the U.S. Marine Corps’ AV-8B Harrier jets. To strengthen the LPC1 airfoils along the inboard trailing edge, the company developed a burnishing tool that hooks backward, with the ball bearing facing back toward the toolholder. This design enables the tool to reach behind the flared edges of the airfoil. 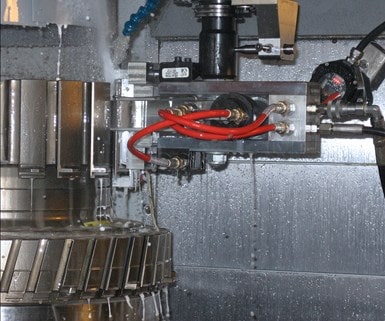 Lambda treats the LPC1 vanes in the Pegasus engines of U.S. Marine Corps’ AV-8B Harrier jets. To strengthen the airfoil along the inborn trailing edge, the company developed a burnishing tool that hooks around the airfoil, with the ball bearing facing sideways from the toolholder.

“Every job we do requires custom work,” Mr. Prevéy says. “We analyze the material, then test its stresses. After that we plan burnishing passes that strengthen it at precisely the points necessary, and that might mean designing a custom tool or workholding to reach those points.” The results, however, speak loudly, Mr. Prevéy says. “The last time a part we treated broke during a fatigue test, a turbine snapped at a completely different area than the customer was worried about,” he says. “Apparently, the part had never lasted long enough for cracks to form in that location before.”

The LPB process now has AMoC certification from the FAA. The company earned this certification in 2013 after Delta Air Lines contacted it when the costs of maintaining its MD-88 main landing gear began to stack up. Vibrational stress over time had caused cracks to form in many of the MD-88 shock-strut cylinders. While Delta had retrofitted the landing gear with damping systems to avoid future cracks from forming, ensuring the existing cracks did not cause operational failures took a great deal of time and money. Further, replacing the cylinders would have cost more than $80,000 apiece. With many units in the field, the costs were prohibitive.

Lambda worked with an FAA Designated Engineering Representative to provide and test the LPB treatment for the MD-88 cylinders. During testing, Lambda met or exceeded the goals set by the FAA, and the company designed a robotic system to process the landing gear cylinders without removing them from aircraft. This performance earned the process an AMoC certification, and Delta contracted Lambda to treat the shock-strut cylinders. According to Lambda, Delta saved more than $10 million in inspection costs, not including the potential costs of flight delays and part replacements.