Whereas his predecessor had left Big Kaiser’s Unilock pallets in the corner, Charlie Mitchell of Andretti Autosport saw that they could help him reduce setup time on his milling machines in an environment where quick turnaround is essential.

Actual machining accounts for just a fraction of the time involved with a part moving from concept to reality. Design, engineering, programming and setting up a job consume the bulk of Mr. Mitchell’s workday. This does not include the time it takes the design engineers to diagnose the need for a new part on a car after a race weekend and prescribe a part for the fix or upgrade. By the time the job gets to him, time is already short.

Andretti Autosport encompasses multiple drivers across five different racing platforms that span the globe. Their races will not be delayed if one of Mr. Mitchell’s parts is not ready. “Whether the car is going up to North Carolina for a wind tunnel test, or it’s going to Iowa for a road course test, it costs hundreds of thousands of dollars to send people there on the company plane. I can’t say, ‘I’m not going to get that part for you in time.’ I have to hit that mark,” he says. When Mr. Mitchell started at Andretti in 2016, he discovered an opportunity that would make hitting that turnaround mark easier. In fact, it was collecting dust in the back of the shop: several zero-point Unilock dual-receiver pallets from Big Kaiser. He had used the system before at a medical device company in a production environment; and that was how his predecessor at Andretti had viewed them: production equipment. Mr. Mitchell thought otherwise.

While some people see the Unilock system as useful for cutting multiple parts on horizontal machines, Mr. Mitchell saw their benefit for use on his vertical five-axis machining centers. “I knew you could utilize the Unilock pallets to really turn a shop into a fast-paced operation,” he says.

Specifically, Mr. Mitchell saw an opportunity to consolidate a time-consuming part of setup: the handling of an array of fixtures like the vises, three-jaw chucks and 5C collets that had to be bolted on the tables of his five-axis DMG MORI DMU 50 and three-axis CMX 1100 V machines with T slots, studs and nuts. This required fully disassembling multiple components from the table, including finding the right studs or nuts and tramming the part before indicating it all back in the machine. The full process took a couple hours.

Unilock’s clamping system uses spring pressure or manual actuation to clamp knobs in fixed locations for rapid unloading, loading and locating of fixtures and workpieces. Standard knobs can be clamped and mounted in a blind location hole from the bottom or fastened from the top of a fixture.

“Because my fixtures are all bolted onto the Unilock pallets, in less than five minutes I can throw the air switch, pull a pallet off the machine, drop another on, throw the switch again, and it’s ready to go,” Mr. Mitchell explains. “I don’t have to bolt the fixture in. I don’t have to indicate it in. I’ve already done that when I set up each pallet.”

Mr. Mitchell says that before the use of the pallets, it could take as many as eight hours to set up his five-axis machine with 10 tools to run 30 to 40 different processes on a part. Now, he says setup times are 70 to 80 percent shorter.

Creative Uses of the Pallet System

Mr. Mitchell has also applied the Unilock pallets to improve access to parts. For instance, he has added a knob and receiver to a block of steel to attach the block to the table on one side and the part to the other. This adds height and brings the part closer to the tool, making it easier to transition from long, rectangular work to smaller, square work. He used this arrangement to make the sockets on the wheel guns the team used in the most recent Indianapolis 500.

The Unilock system has also improved efficiency in coordination with both of Mr. Mitchell’s primary milling machines. For instance, he has a large 20-by-40-inch aluminum plate on his three-axis CMX 1100 V. A couple standard vises are bolted onto one side of the table and a dual Unilock receiver is on the other. Mr. Mitchell can thus quickly set up finishing operations or work that does not require five-axis spindle time.

The use of the pallets has given Mr. Mitchell the time to multitask for faster turnaround. “I can program, set up and run five different multi-operation jobs in a week, and we’re talking complicated parts with extremely tight tolerances,” he says.

The added adaptability came in hand when a recent rule change allowed teams more freedom to modify the front and rear rockers. With a regular vise, it would take five operations to execute the team’s design of the 8-by-6.5-by-1.5-inch rocker part. Instead, he set up three different vises on the Unilock pallet and was able to perform all five operations on his vertical mill. If he had done it one operation after another, Mr. Mitchell estimates it would have taken him a week to finish 10 of these parts.

While there is usually time to prepare for a rule change, Mr. Mitchell explains that other changes are not always so predictable. With so many teams and their needs to juggle, part priorities can change in a matter of a few minutes. Before, it would be “get in line,” if an engineer came in with an urgent request. But now, with the combination of a 30-tool magazine and the Unilock system, Mr. Mitchell can quickly adapt to different needs. 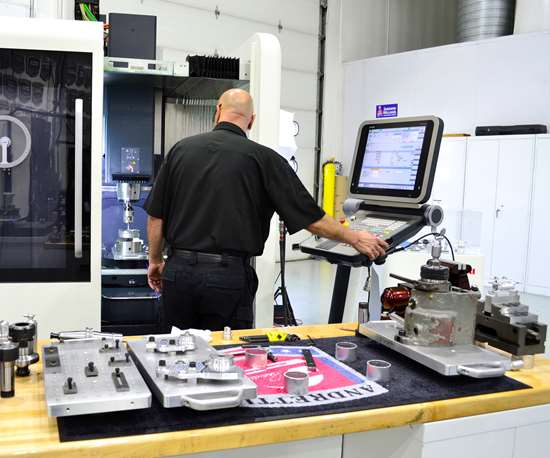 Charlie Mitchell, machinist for Andretti Autosport, works at one of his two primary milling machines. Behind him, Unilock pallets are ready to set up. For Mr. Mitchell, fast turnaround is essential, and setup times need to be quick. 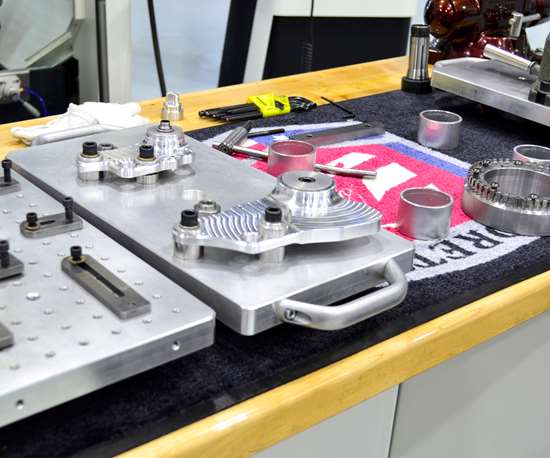 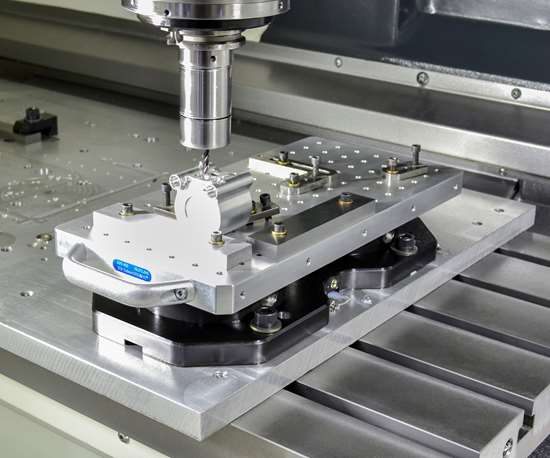 The Unilock pallet uses a grid of holes for flexibility to change out fixtures when needed. The clamping system uses spring pressure or manual actuation to clamp knobs in these fixed locations for rapid unloading, loading and locating of fixtures. Standard knobs can be clamped and mounted in a blind location hole from the bottom or fastened from the top of a fixture. 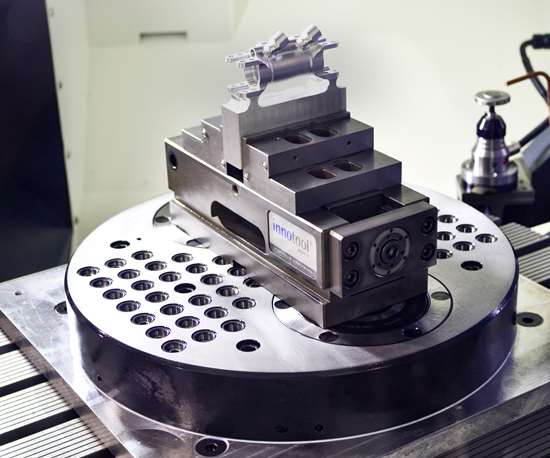 All first operations for this valve body are completed in one setup of a raw blank using a Unilock Univise from Big Kaiser.