MYT Works Inc., a New York-based manufacturer, is intimately familiar with both movies and manufacturing. The company designs and manufactures slider dollies, skater dollies and tripod heads to hold and move cameras for smooth camera tracking, panning and circling shots for film. To achieve the precision needed to avoid any shaking in camera movements, the company uses machining simulation software to preview and validate CNC machining programs when it manufactures its products.

Filmmaker Etienne Sauret, a veteran in film and television production, founded MYT Works in 2010 in Manhattan, New York, after becoming frustrated with existing portable camera-movement equipment that failed to address problems such as deflection, bounce-back and noise. Although there are products designed to address these individual issues, he says they are typically customized, one-off items with cumbersome, time-consuming setup requirements, and their temporary nature makes them prone to damage and deterioration. Dissatisfied with these options, Mr. Sauret collaborated with a team of engineers to create camera-motion equipment that would better suit industry needs.

MYT Works’ products are designed to hold and stabilize cameras, moving them precisely while minimizing setup time and production-quality issues. Its products are modular in construction, simplifying combinations and variations to provide flexibility and adaptability. They are machined from aluminum and steel, and versions of the dollies can support cameras weighing as much as 150 pounds. The precision tripod heads, which mount on the dollies, can handle as much as 80 pounds.

When Mechanical Design Engineer James Schwartz joined the company in 2012, it was located in a 600-square-foot space in Manhattan, outsourcing its product prototyping and part production to machine shops in the New York City area. In 2014, extended lead times and the high cost of outsourcing prompted the company to purchase a small machine tool to produce prototype runs of one or two parts. The company used an integrated CAD/CAM software package to engineer the parts and create code for the machine controller. Often, the parts were experimental and difficult to make, so performing trial-and-error CNC programming and testing on the machine consumed more time than the actual machining.

“In a volume production environment, you are able to amortize the time spent setting up and making mistakes at the machine over a very long period of time because you’re running lots and lots of parts,” Mr. Schwartz says. “But for us, in a prototyping situation where a part is machined in five minutes, to wait an hour to set it up and get it right is a huge loss of time.”

Getting the Shot with Toolpath Verification

MYT Works used the software to simulate and verify the CNC programs produced by the CAD/CAM system. “NCSimul enabled us to move quickly through programming without having to try out tool paths at the machine itself,” Mr. Schwartz says. “We could skip that trial-and-error process at the machine. I could program the tool paths and then check the program both for safety and accuracy while the machine was running on something else.”

The shop moved to Brooklyn in early 2017 to gain space and expand its manufacturing capabilities. It also purchased two larger CNC machines from Okuma: an L-250 CNC lathe and a Genos M-560 three-axis vertical machining center (VMC). With these machines, the company now performs 90 percent of its production manufacturing in house, Mr. Schwartz says. Fortunately, NCSimul provides similar benefits in both prototyping and production. “NCSimul helps us to work through the programming part quickly so that we can focus on design and innovation,” he says. “Interruptions in production are costly, and any mistake that we can prevent keeps the machine running and keeps us on schedule.”

According to Mr. Schwartz, Spring Technologies does a good job supporting industry-standard software formats. “I don’t have to alter my normal workflow,” he says. “I can bring it all into NCSimul within minutes, and then have a real-time view of what my program would do on the machines downstairs.” Another benefit is no longer needing to stop a machine to test a program. Instead, users can test programs virtually and move on without taking up machine space.

Focusing in on New Challenges

Recently, the company installed a Tsudakoma fourth-axis rotary table on its VMC, positioning the part parallel to the X axis, which is perpendicular to the table, enabling operators to use it as an indexing tool so the VMC can reach multiple sides of each part with a single setup. The fourth axis adds concerns about machine collisions and tool lengths that toolpath simulation software can address. Additionally, the tool paths in four axes can be more difficult to visualize, Mr. Schwartz says. NCSimul has helped in these new challenges as well.

“NCSimul has enabled us to get to the final working part in one or maybe two tries instead of multiple tries,” he says. “And when there are issues with a program, it makes it a lot easier to diagnose because the comparison feature will show exactly where the tool is either over-cutting or under-cutting. You can even jump to the particular line where it’s happening.” Using toolpath simulation software has saved the shop from testing its setups on actual materials, which would risk creating scrap or damaging equipment, getting production on track. 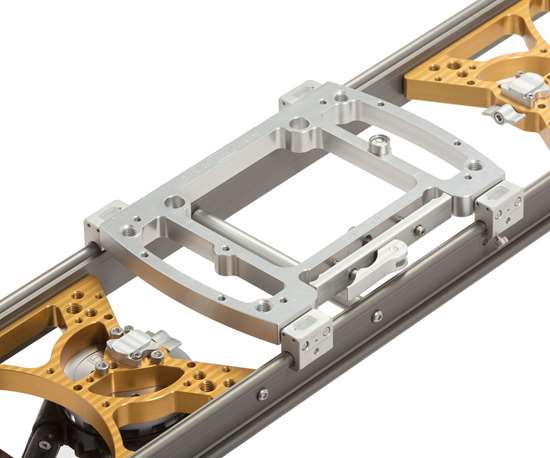 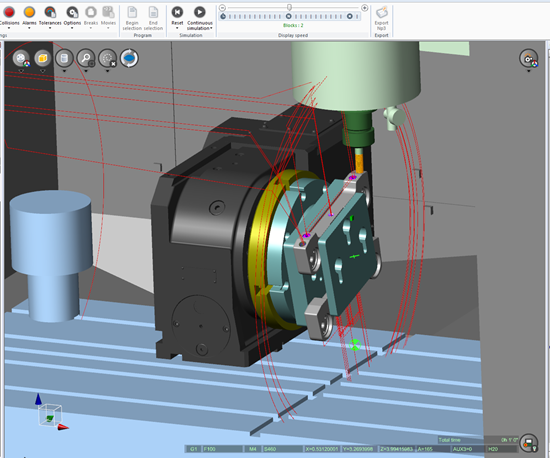 NCSimul enabled MYT Works to program a machine tool without having to try out toolpaths at the machine itself. The software enables the shop to avoid costly mistakes and keep on schedule.