A shop finds an alternative for work that does not require advanced CNC machining centers or high levels of moldmaking expertise.

One of the first things a visitor might notice on a tour of International Mold Corp. (IMC) is a line of programming kiosks in a central aisle, only feet from some of the shop’s largest and most productive horizontal machining centers. Plotting tool paths for cores and cavities on the shop floor makes the people programming and operating the machines nimbler, says Gabe Meldrum, plant manager. Likewise for the modular, quick-change workholding systems on all the HMCs, which feature pallet changers and high-capacity toolchangers to enable long periods of uninterrupted machining on parts that are rarely alike.Just around the corner is a particularly large machine: a twin-spindle combination of boring mill and gundrill that thrives on heavy hogging and carving cooling holes deep into mold bases, a component that many shops outsource.

These examples evidence the shop’s drive to adapt quickly to new work and to control as much of the process as possible. All are also limited to a single facility, one that the mold manufacturer outgrew long ago. Similar technologies and strategies are now at work in six other nearby plants, each dedicated to specific aspects of machining cores and cavities, injection-molding parts (often for sale as well as mold try-out), and combining molded parts into market-ready plastic assemblies. An eighth facility—the newest and the first to be located outside the company’s Detroit-area campus—is in South Carolina, where tooling can be built and repaired closer to important automotive-industry customers. With twin specialties in blow molds designed for millions of cycles and aluminum-injection molds for prototyping and lower-volume production, the 12-year-old company has set itself up to flex as needed with business conditions.

However, rapid expansion has not been without challenges. For all IMC’s investments in precise and flexible CNC machining technology, simpler work has often strained capacity. After all, Mr. Meldrum explains, even the most complex mold contains components that do not warrant the capability of a CNC machining center. However critical, such parts should not require the attention of toolmakers hired for their expertise in not just complex CNC machining, but also mold fit and function. For most of the shop’s history, outsourcing the growing volume of 2D work has been a better option than tying up people and machines needed for the essentials of moldmaking, Mr. Meldrum says.

Waterjet changed everything. In addition to freeing CNC machining capacity, machining with a high-pressure, abrasive-infused stream of water has liberated personnel from manual tasks like cutting shims with scissors and machining holes into plate with a radial drill press. Parts with identical geometries can often be stacked for simultaneous machining. At lower pressures, the machine also can be used to impart part numbers and other engravings.

All in all, Mr. Meldrum estimates that the waterjet saves hundreds of labor hours per week. It has also been used for the odd non-mold-related job—a potential extra source of revenue if business sours. “We think of it like a really high-precision CNC saw,” he says, although in this case the “blade” is a high-pressure stream of water. “It’s opened a ton of capacity. We’re able to leave giant sheets of material on the table and cut parts out as needed, and the scrap becomes lifters, inserts or anything, really. Waterjet comes to mind every time we see a 2D shape.”

The expansion that made waterjet necessary also made waterjet feasible by freeing room for the system in the first place. With a total footprint of 35 by 17 feet, the Wardjet Z-2543 and its auxiliary equipment occupy most of the space in plant 3 vacated by the move of blow-mold personnel and equipment to plant 4. Given the advantages of cutting multiple parts from a single, large plate (typically 4 by 8 feet) and the ability to reuse the scrap later, Mr. Meldrum says the system has been worth every square inch.

The focus of plant 3 is prototype/low-volume injection molds, many of which are destined for operation, or at least try-outs, on the presses in plants 2 and 6. The waterjet was installed there largely to machine manifolds for this tooling. Built to house the mold’s plastic-delivery system, manifolds are forgiving, but they are made of steel, and they trend large. Without a waterjet, these components would occupy valuable time on CNC machining centers that are better suited for more difficult jobs. They also would require carbide cutting tools that are generally more costly than the high-speed steel cutters used for the rest of the aluminum molds. Manifolds were once outsourced, but they still required cleanup on a machining center due to a hardened scale left by the outside supplier’s flame-cutting process. Relying entirely on the pressure of the stream and the garnet particles carried within, waterjet came to mind as a way to make these simple cuts in-house and without the heat.

Before long, waterjet had proven equally useful for supporting blow-mold production in plant 4, just a short walk away. This tooling is too complex and customer specifications are too varied for in-house manifold production, Mr. Meldrum says. However, unlike injection tools, making blow molds often involves fabricating a number of 2D components, such as brackets and other fixtures.

From there, the waterjet’s work expanded to ejector plates, wear plates, shims used to adjust a mold’s fit in the press, and even various components for its own custom machinery, such as the hot-plate welding unit used in plant 6 for plastic assembly operations. However, expanding the waterjet’s share of work at IMC required configuring the machine to suit the needs of mold manufacturing. Here are a few key elements:

Sourced from Ebbco, one key auxiliary system is a sweeper package inside the waterjet tankthat facilitates long stretches of uninterrupted operation by preventing exhausted abrasive from ever settling at the bottom. Rather, the material is continuously fed into a hopper for disposal.

This is just one part of a broader, closed-loop water treatment and recycling system. Overflow from the tank sits in a separate weir, where any sludge not caught by the sweeper settles. The water then passes through two reservoirs: a dirty tank, where filtering mechanisms remove dissolved solids, and a clean tank, where ultraviolet light exposure kills bacteria and other organics. After passing through a final filter and a chiller, water returns to the intensifier pump for reuse.

Waterjet is known for simplicity as well as versatility, and IMC was leveraging benefits almost immediately upon getting the system up and running, Mr. Meldrum says. Aaron Bazydlo has been the waterjet’s primary operator for most of the past three years. Before working on this equipment, he had never worked with any CNC machine, but he says it has been relatively easy to learn.

Intuitive controls and software help. Specifically, he points to the iGems CAD/CAM software’s capability to automatically nest part geometry within larger plate. Software also makes aligning parts and setting location offsets easy. As for fundamentals, he says he has learned a lot not only from Wardjet training, but also from experienced machinist coworkers who had never run a waterjet but found that many of the same concepts still apply. Exceptions include rules of thumb, such as letting the pump warm up, as well as maintenance-related items, such as recognizing orifice wear, setting compensating offsets and understanding when to change the orifice (the shop recently switched to diamond orifices, which are more expensive but last longer than the previous ruby).

All indications are that IMC’s expansion into waterjet is not over yet. For instance, the shop has recently begun to experiment with adding pneumatic drilling and reaming options to the waterjet. These could save more time, expand the system’s range of work and free more toolchanger slots on the shop’s milling equipment. Meanwhile, the machine continues to prove its worth, sometimes unexpectedly. “We had a mold that got canceled recently, so there was this big chunk of aluminum sitting out back,” Mr. Meldrum recalls. “There were plenty of other jobs that would fit inside that block, and it wouldn’t fit on any saw, so we just took it to the waterjet and cut it to pieces. It runs 24 hours a day, 7 days a week when we are busy.” International Mold Corp.’s waterjet goes to work on a set of shims. Since installation three years ago, the machine has been employed for manifolds, ejector plates, wear plates, gibs, fixtures and various other parts. Made in multiples, shims are thin enough to waterjet-cut simultaneously by mounting the sheets between two aluminum plates. 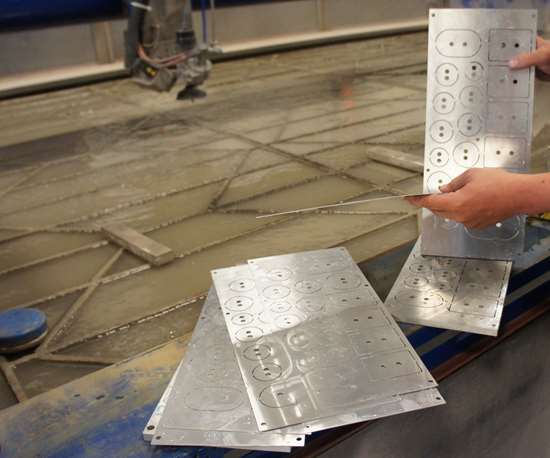 Before waterjet, the shims would have been cut with scissors or would have occupied time on other machinery. 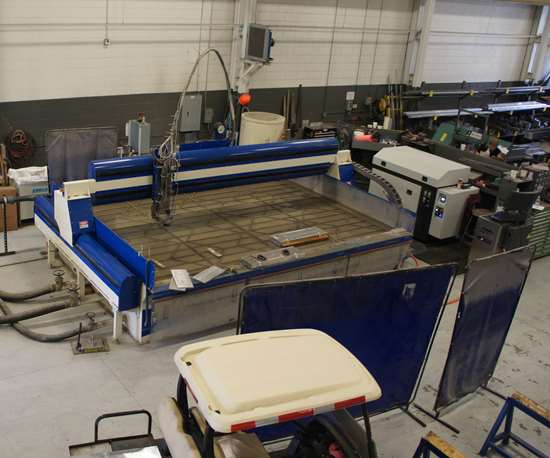 The advantage of the waterjet’s large workzone, divided into grates that can be machined when they deteriorate due to wear, is the capability to set up multiple jobs or cut multiple parts from a single plate. 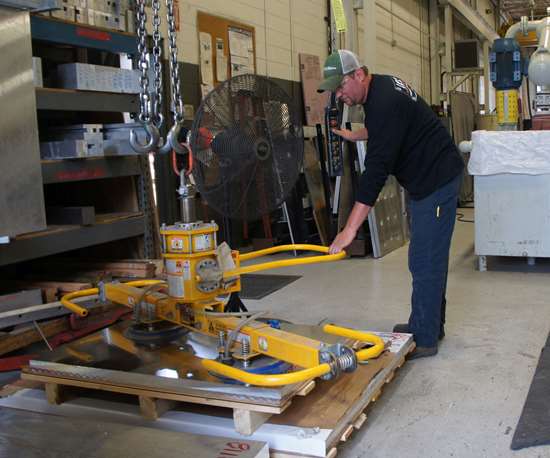 Supporting equipment is not limited to filtering systems like the Ebbco hopper in the background, which collects spent abrasive. This vacuum loader enables Mr. Bazydlo to easily load large plate onto the waterjet grates. The waterjet has already machined a large manifold from this piece of steel, the top and bottom portions of which were Blanchard-ground for flatness beforehand. The extra material will sit behind the shop until an opportunity arises to cut other parts from the same plate. 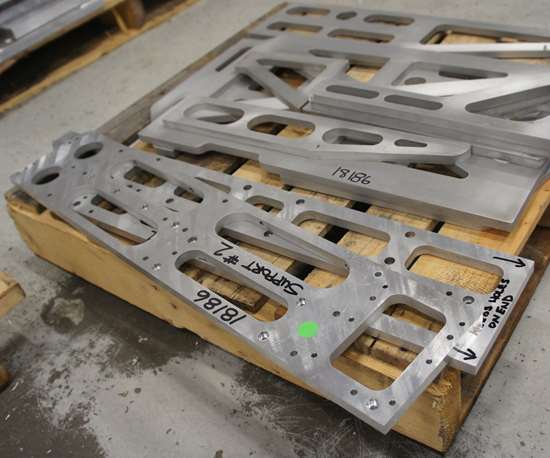 Some of these waterjet parts have also undergone milling for 3D features like countersunk holes. The shop is experimenting with pneumatic drilling and reaming heads that could further expand the waterjet’s capabilities. Aaron Bazydlo, the waterjet’s primary operator, demonstrates how the system’s software eases the work of locating and aligning multiple parts on the table.