DRO: Everything You Need to Know

DRO: Everything You Need to Know

A digital readout, digital position readout, or DRO, is a numerical display that is mounted on a manual machine. The display indicates the position of your part or tool. So, what’s the benefit for machinists? To complete applications faster and with greater accuracy. With DRO, expect to spend less time on math. A reduction in human calculations means a reduction in human error, thus contributing to fewer scraps and more profit. When you spend less time checking and measuring and more time making parts, productivity greatly increases.

Common issues that lead machinists to purchase a DRO unit are misreading the handwheel dials, losing count of the wheel rotations, and the nuisance of switching from metric to imperial, which is easily done with a DRO. 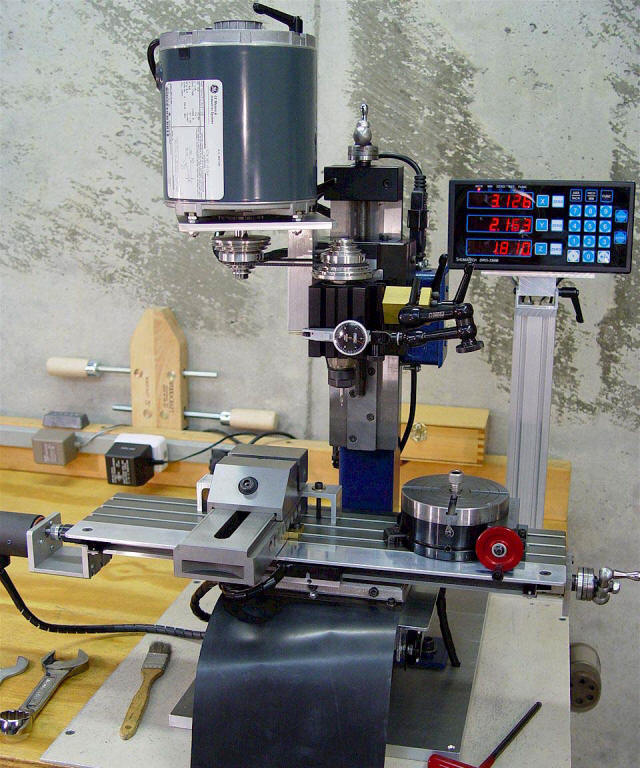 So how do these devices even work? The integral computer reads signals that are sent from encoders that are installed to track machine axes. These encoders are either linear or rotary and report the workpiece movement to the display.

Encoders are a fundamental part of the DRO unit. It is important to understand the different types of encoders because they are a major part of what differentiates one DRO from the other.

Before breaking down the different types of encoders that are fundamental parts of a DRO kit, we must understand what an encoder is. An encoder, also referred to as a scale or sensor, is a sensing device that provides feedback. That feedback is the conversion of motion into an electrical signal, which is displayed for the operator to interpret on the display, which includes information about the positioning and movement of the workpiece.

The encoders in DRO kits are comprised of a scale that remains stationary and a scale that moves with the workpiece. The encoder then measures the variations in position of the two scales. Then, signals are sent to the display in one of two ways: incremental or absolute.

The key here is that with incremental movement, the specific position is not tracked. The purpose is only to measure the change in movement from one position to the next.

An absolute encoder reports two things. Similar to an incremental encoder, it indicates if workpiece positioning has changed. Additionally, the absolute position of the encoder is reported.

To put it simply, linear encoders track linear motion and rotary encoders track rotating shafts. Each is designed to pick up the associated errors of movements they track.

Linear encoders are more frequently used than rotary encoders, for both lathe and mill work. Here’s why.

The encoder is the piece that connects to the moving part of the machine. Because the encoder sits so closely to the high-speed movements of the machine, they are subject to damage from impact. So it is recommended that you purchase a metallic shield to protect your DRO.

Linear encoders help minimize errors in motion transmission like backlash, hysteresis, and more. Since these encoders measure positioning, it is absolutely necessary they be mounted carefully to ensure signal integrity is not compromised.

Rotary encoders measure rotation. In the machine tool industry, they are best for monitoring spindle rotation, however there are some issues with rotary encoders that make the linear option more popular.

The rotary indicates the position of the cutting tool by tracking the number of revolutions it takes for the motor to drive the ballscrew. However, what the rotary encoder neglects to track is the effect of significant friction placed on the ballscrew during high speeds and acceleration/deceleration rates. That effect is called thermal expansion, which changes the position of the nut that travels along the ballscrew and thus the cutting tool. So, moral of the story, when possible, consider a linear encoder for your DRO unit. Practical Machinist members discussed the pros and cons of adding a rotary encoder to your manual machine, join the convo here.

Types of linear and rotary encoders

Each encoder comes in a variety of different types. The most common being optical and magnetic encoders.

A glass scale is a thick glass strip with two optical sensors that are positioned close together to execute some form of photoelectronic scanning. Essentially, optical scales use either the reflection or diffraction of light to sense positioning. The strip is cradled in an enclosed aluminum housing. The housing is a vital protective measure, in that optical encoders are highly sensitive to any debris that could interfere with the transmission of light and are positioned directly where the work is performed.

Glass scales are the best for ultra-precision machining because they offer higher resolution than their magnetic counterparts. This makes them very popular in aerospace manufacturing.

If an optical model is what works for you, here’s a recommendation.

Magnetic encoders have sensors that provide position information by detecting change in magnetic fields. If your application requires a long encoder, magnetic encoders are offered in lengths up to 100 meters. The bulkiness of magnetic style encoders does make the mounting process a bit more difficult, however their design style allows them to be so robust.

If a magnetic encoder is what works for you, here’s a recommendation.

You’ve decided to purchase a DRO kit…now what?

DROs are quite contradicting in that they are an expensive addition, yet money-saving purchase. Deciding if one is right for you will take some time. So, if you’ve made it to the other side of the consideration phase and have decided you’re in the market for a DRO kit, there’s one last very important thing we encourage you to examine.

Though different brands and models really all do the same thing, they do them differently. There are two main display methods with their own advantages and disadvantages.

Menu system: This display has a smaller and sleeker display with fewer buttons and a smaller keypad. Because menu systems are easier to manufacture, they are cheaper to produce and therefore the more economical option. At first, this appears to be a benefit, however, you may be signing up for more than you expected. Since menu systems have fewer controls, the operator should expect to memorize many keystrokes as the display functions with a drill down menu system. Accessing desired key functions will require a substantial amount of studying or you should expect to lean on the menu system guide regularly.

Here is a 2-axis menu system DRO units to consider.

Dedicated button or hard key system: Instead of a drill down system, this display offers a dedicated button system, just as the name implies. Populated with buttons, more materials are used, so manufacturing the display is more expensive than the menu system and therefore more expensive. But they are indeed the easiest to use option.

Here is a 3-axis dedicated button DRO units to consider.

When it comes to installing your DRO kit, thoughtfully decide whether it is in your best interest to take on the task yourself or hire a professional to get the job done.

This post may contain affiliate links. Please read our disclosure for more info.