At BIG KAISER, we consider the increased rigidity, reduced runout and added productivity to machining applications the BIG-PLUS® spindle system provides settled science. And not just because our parent company BIG DAISHOWA developed it and owns the master gauges: we’ve tested it; users have told trade publications how well the system works; and our customers often tell us how much it’s improved their operations.

We do also occasionally hear from customers that were once excited to start taking advantage of the system but aren’t getting the results they expected from the heralded simultaneous taper and flange fit. They wonder, “What gives?”

When we dig further with these customers, we often find that the issue traces back to the machine, not the tools. They can vary, but luckily, there are not only ways to prevent them, but there’s also hope for resolving them. 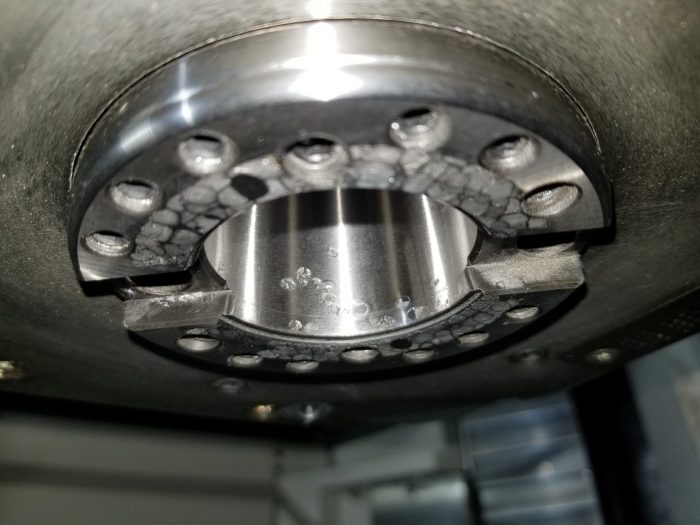 Arc welding on taper and taper face due to improper fitting tool. Customer was not using a BIG Daishowa tool holder.

For some firsthand insight on this topic, I reached out to our friends at SPS Spindle Parts and Service, a licensed BIG-PLUS spindle grinder that can also perform onsite grinding. They’ve serviced hundreds of BIG-PLUS spindles and know as well as anyone the causes, effects and solutions for the most common performance issues.

As SPS’s lead BIG-PLUS grinder, Phil Marmo put it, “One of the biggest failures or reason for failure that I see is just simply a lack of cleanliness.” He described being in shops where tooling carts are covered with film, debris and chips. More often than not, he says, he finds the same conditions behind the flange. This leads to problems because the BIG-PLUS system relies on tight tolerances at both the taper and flange when under a cutting load.

“If you have dirt in any part of the system, you lose your tolerance,” he added. “The tool starts to work in the spindle, to wobble or rock. Once that starts to happen, the system breaks down quickly. You can see little indentations or circles that wear into the holder.” 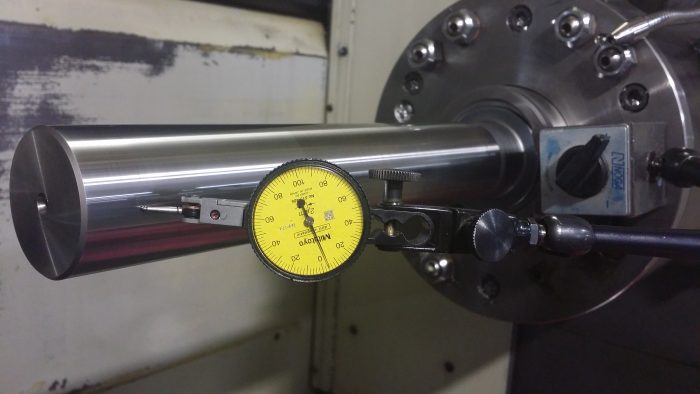 Checking Run-out with a 300mm test bar after grinding a BIG PLUS taper.

Prevention: Keep tools, spindle tapers and faces and carts clean. When kept clean, the system performs better and longer than other arrangements. We offer an array of tool and spindle cleaners for just this reason.

How many M06 (automatic tool change) processes do your machines perform? My guess is a lot. If that tool changer arm is out of position, even slightly, when it approaches the spindle, it will cause wear on the spindle taper over time. As mentioned earlier, that deterioration can lead to performance that’s not up to BIG-PLUS standards.

Prevention: Regularly maintain your ATC systems and arm alignment. Simple arm-alignment tools have been developed and are readily available to make this fast and easy. 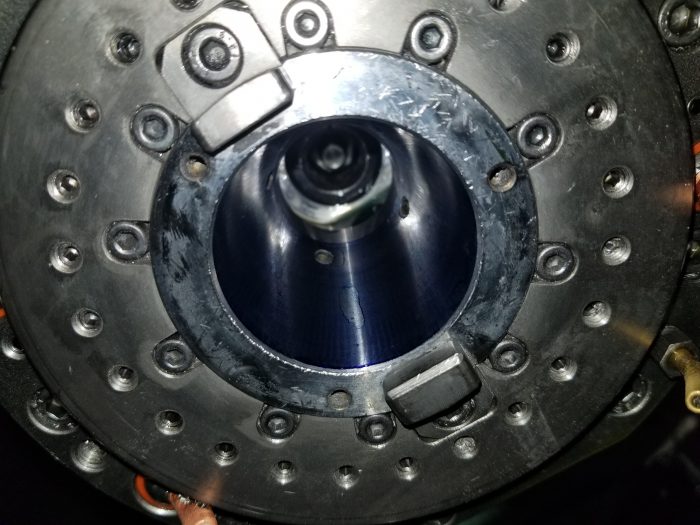 When you use standard V-flange tooling on a BIG-PLUS spindle, that spindle opens up over time. It becomes a little bit bigger or wears bell mouth. That’s ok if you’re using just taper contact tooling, but not when you put a BIG-PLUS tool into that spindle.

Phil explained that he has seen the scenario play out over and over where standard tooling was used and the spindle face measured .001”-.002” heavy, or worse. At numbers like that, you aren’t going to get taper contact, and you are going to have runout, even with BIG-PLUS tools.

Prevention: We don’t recommend using big plus spindles that aren’t either new or certified by experts like SPS. Because if you put BP into a stretched out, worn spindle, it’s probably not going to perform nearly as good as a standard tool holder and certainly not as good as a BIG-PLUS should. 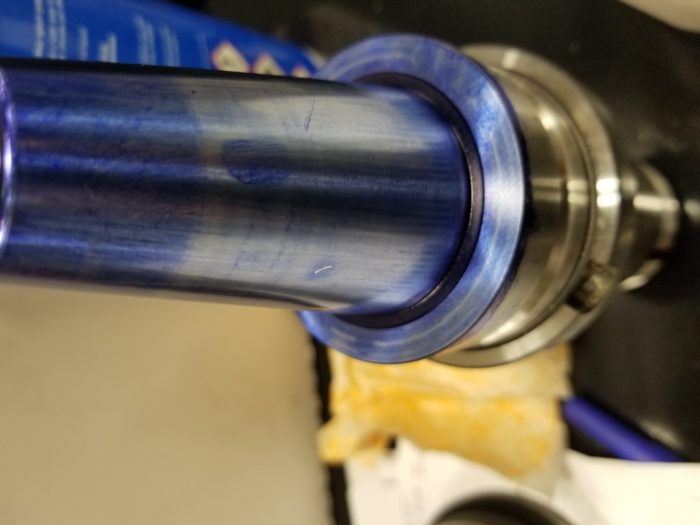 Tool holder blued up to check contact before grinding. As you can see its only contacting about 50% of the taper and the face is not making any contact.

Not all dual-contact tooling is created equal. While more than 150 machine builders are licensed to sell BIG-PLUS spindles, only a handful of tooling companies are licensed to sell the BIG-PLUS tooling—and there are lots of knock-offs out there. Taper contact before clamping is very important and therefore the dimensions and tolerance of the flange face are critical. Without the license, manufacturers have neither the exclusive gauges nor knowledge of the appropriate tolerances and forces, resulting in unsatisfactory performance and/or spindle damage. 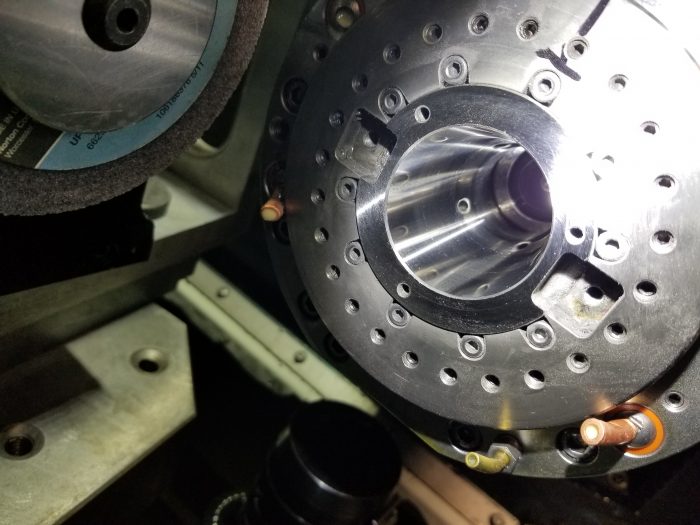 If you’re already seeing symptoms like these, it may be too late for the “prevention” steps to be effective. That’s where people like Phil and the SPS team come in. A spindle regrind can return a BIG-PLUS spindle to peak performance—but not just any regrind. Just like manufacturers need the right gauges to build on-spec BIG-PLUS tools, regrinders need the master gauges and measuring devices to return spindles to spec. Only certified servicers have that. (In fact, we could have included “Having an uncertified grinder regrind your spindle” on the list above.)

“I don’t know how anyone can do it without the gauging,” Phil said. “They’re sneaking up and guessing. Just because the face is touching doesn’t mean it’s under the proper pressure. And if it’s not, it’s going to wear prematurely. Don’t underestimate experience either. There’s a lot to be learned from experience.”

The temptation is there, especially after a catastrophic event, to use a die grinder to attempt to remove build-up inside the spindle. But that’s a bad move according to SPS’s onsite grind manager, Chris Vigneault. “They don’t know the right geometries and relationships, and for lack of a better term, go in there and screw everything up,” he said. “Then we have to come in and fix it, which takes longer.” 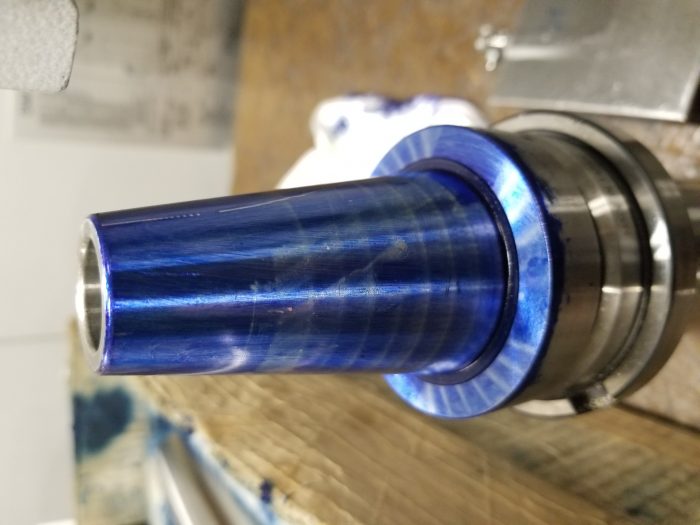 Tool holder all blued up before rechecking contact after grind.

Phil jumped in, “I can’t stress highly enough that that is the worst thing to do. When they get in there by hand, they don’t have a lot of control and often undergrind the spindle. You can’t put that material back.”

Their concern demonstrates not just how important the right regrind is, but also the value of scheduled grinds. It not only helps prevent a disaster, but it accurately diagnoses issues that could be misinterpreted as worse than they are.

Before even considering the BIG-PLUS relationship, Phil starts with vibration and retention force testing to identify any foundational (bearing or drawbar) issues. From there, he’ll test runout inside the nose with a micron indicator, and at 300mm out with a test bar. He’ll also check where tool/spindle contact is being made.

Once shops see this process and how much it can teach them about their machinery, they realize how important it is to have the rest of their machines checked. “It’s going to be a lot quicker for us to grind spindles while we’re there,” Chris explained. “Many times, they’ll want us to check other machines and perform preventative grinds.” 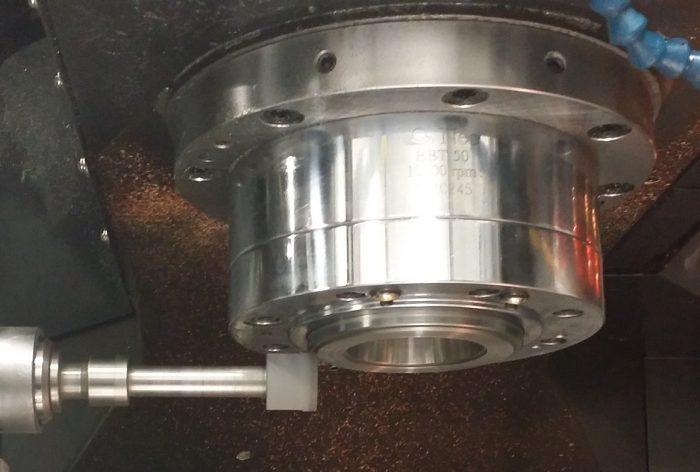 Grinding the face of a BIG PLUS Taper.

So, whether you’re not getting the performance you hoped for from your BIG-PLUS tools, or you’re about to start using them, keep spindle factors in mind. And don’t go it alone if you have a hunch there’s something wrong or can’t diagnose the cause of poor performance.